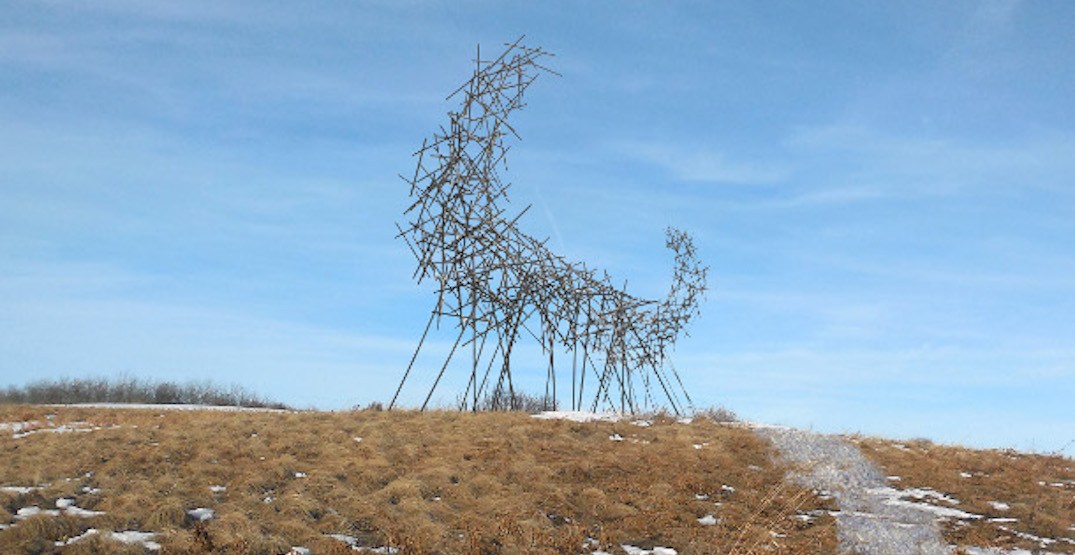 It hasn’t been around for long, but the newest addition to Calgary’s public art pieces has already caused quite a stir.

Temporarily titled Ascend, the new sculpture has been erected on a hill by the Shane Homes Rocky Ridge YMCA and features two mirrored monuments, both standing roughly 45 feet high.

The artwork has been made using stainless steel tubes to create what looks like curved horns atop the hill.

The artwork was designed and created by artist team Haddad | Drugan, aka Laura Haddad and Tom Drugan.

The same team were the artists behind the public art piece Flock, which is also located near the Shane Homes YMCA.

Ascend has received some scrutiny from the public, mainly due to its $911,000 price tag. As with most large-scale construction project in the city, a percentage of what is spent on infrastructure must go towards public artwork.

The Shane Homes YMCA’s total public art budget landed at $1.49 million, with Flock using roughly one-third of that sum and Ascend using most of the remainder, according to the City of Calgary’s website.

Many Calgarians were left with a bad taste in their mouth following the controversy that was caused when nearly half a million dollars was spent on the Travelling Light installation — The Blue Ring — back in 2013.

“Ascend” is only a working title on the new installation, and the City of Calgary is asking the public to send in their ideas for a new title.

Unfortunately, many are taking this as an opportunity to voice their discontent in the use of public funding:

“The rest of the sticks from the Bowfort Towers”

How about “Big Pile of Stick” 🤦‍♂️

However, there were others who were a little less harsh on the new public artwork:

Calgary’s new public art sculpture “Ascend” by @HaddadDrugan is so beautiful I am heading up to the NW this weekend just to see it in person https://t.co/SPalB1CnuY pic.twitter.com/SLOLhmW4Du

Still better than the blue ring. It’s horns and apparently when light hits it it’s supposed to be like a prism. I’ll judge it when it’s done.

As with all artwork, the old saying “beauty is in the eye of the beholder” rings true.