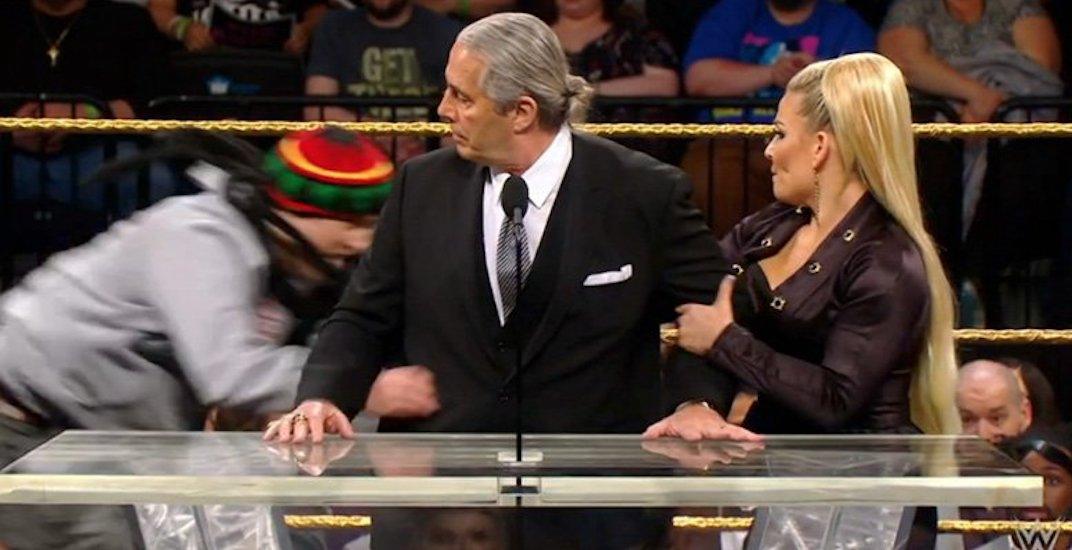 WWE wrestling legend Bret ‘the Hitman’ Hart was attacked during his Hall of Fame speech on Saturday.

And no, it was not part of the show.

Here we go. What an idiot. He got much worse than he gave. #BretHart#WWEHOFpic.twitter.com/FlAo1l9S8h

The 61-year-old former WWE star from Calgary was tackled by a spectator, who was quickly subdued. Hart, thankfully, was alright.

The incident took place at Barclays Center in Brooklyn, one day before WrestleMania 35 in New Jersey.

New York City Police reportedly arrested 26-year-old Zachary Madsen, who faces assault and criminal trespass charges. His punishment has already began though, as he appeared to be beaten up immediately by at least one wrestler on hand.

Bret Hart’s attacker get mad his face smashed in by what looks like Dash Wilder. #WWEHoF #WWE #BretHart #Attack #WrestleMania credit to my boy Martin Endersby via FB pic.twitter.com/dO6Ckhk5Jt

Hart was inducted into the WWE Hall of Fame for his role with the legendary tag team ‘the Hart Foundation.’ The other half of the team was represented by pro wrestler Natalya Neidhart, daughter of Jim ‘The Anvil’ Neidhart, who died last year.

“I’m so proud of my uncle Bret Hart tonight during our Hall of Fame ceremony,” said Natalya in a message posted to Twitter. “Bret is a cancer survivor, a stroke survivor and one of the greatest wrestlers of all time.

“He didn’t deserve to be attacked or have his moment or my dad’s diminished. We got it back on track. Thank you, guys.”