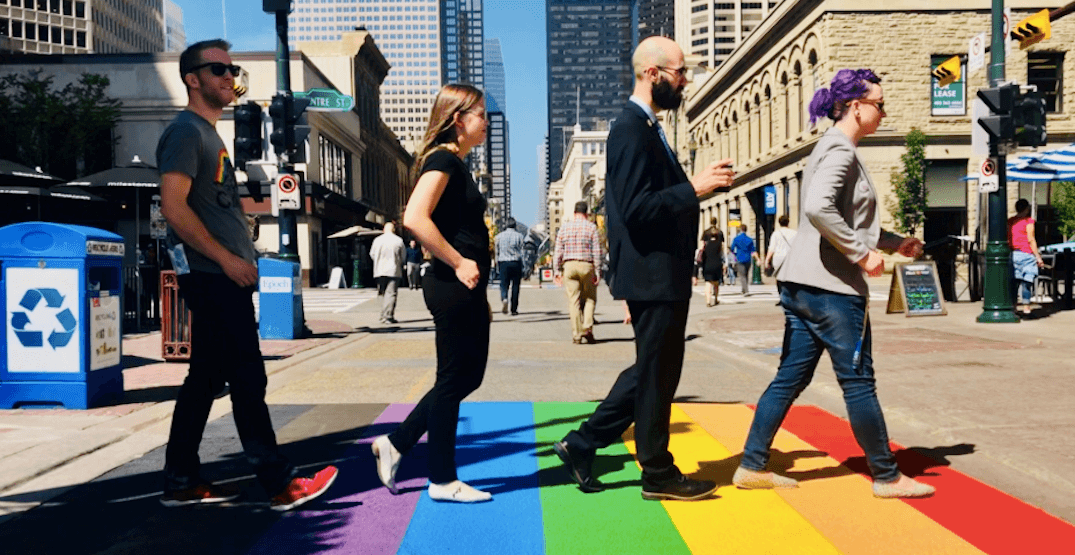 The city of Calgary just got a little more colourful.

The intersection of Stephen Avenue and Centre Street in downtown Calgary is now proudly displaying two crosswalks painted the rainbow colours of the LGBTQ+ Pride flag and the blue, pink, and white of the trans flag.

Calgary has previously painted crosswalks in celebration of Pride month, but they have always been temporary.

Mount Royal University installed the city’s first permanent Pride crosswalk during 2018’s Pride, and now downtown has unveiled its own at an event this Monday.

“Calgary Pride is proud that both trans and racial representation is seen in the two flag designs chosen; this is not a statement that Calgary Pride or Calgary are as inclusive and diverse as we need to be, but instead a reminder of how far we’ve come, an ongoing commitment to never turn back, and a pledge to continue down the path for all Calgarians to feel a sense of belonging,” a release from Calgary Pride states.

The painting was the work of Zoom Painting, who have stated that they will upkeep maintenance on the crosswalks for up to 10 years — a similar promise to the one made when they painted Mount Royal’s Pride crosswalk.

Here’ what Calgarians have been saying about downtown’s newest addition:

I was happy to help celebrate the permanent pride/trans crosswalks on Stephen Ave at Centre Street today.

Paint donated by @SherwinWilliams while design & labour donated by local co. @ZoomPainting. Zoom has also committed to maintaining the crosswalks on behalf of @CalgaryPride pic.twitter.com/c07njURKP1

Rachel eyeballing the new crosswalk, she can’t wait to run across it! @Crackmacs@nenshi@SeanDunn10#calgarypride #yyc pic.twitter.com/bbtWh4HFPq

They’re beautiful! So excited for the official unveiling at 12pm today. See you there! Thanks to Calgary’s Zoom Painting for their amazing donation of these incredible symbols of Pride!! Let’s show ’em some love, shall we: https://t.co/BSmlM2xZHd pic.twitter.com/lj5aWFE24p

Not that I wouldn’t support the city paying for it – for a whole bunch of reasons… but… Calgary’s pride crosswalks are paid for by donors. The truth is important! https://t.co/quNagXgJxP