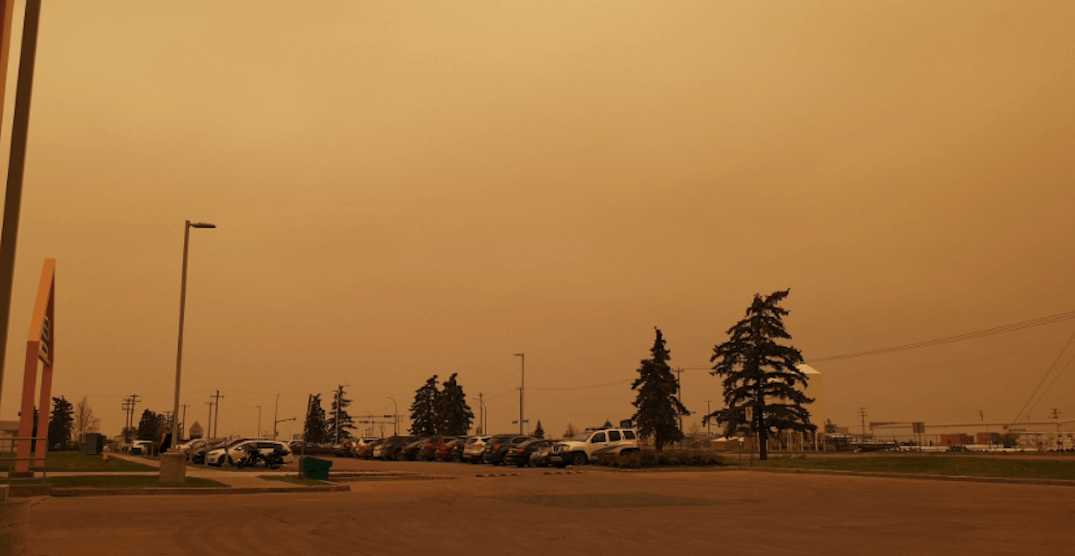 Albertans have been voicing their frustrations about the heavy covering of smoke that has engulfed nearly all of the province.

Nearly 400,000 hectares of northern Alberta has burned/is currently burning, and with no hint of precipitation on its way to help the over 2,000 firefighters currently battling the blaze, the situation may get even worse.

Over the past few days, the smoke from the wildfire has drifted down south, causing an air quality advisory for almost every region in Alberta.

What was supposed to be a bright, clear, sunny end of May in many parts of the province have instead become dreary and grey, with Albertans being warned to avoid spending too much time outdoors in the smokey haze.

Naturally, some Albertans have taken to Twitter while they wait for the clouds of smoke to disperse, venting their frustrations in the public forum.

The smoke in Calgary is ridiculous. It is getting inside my school, hospitals and everywhere. And plus, look at the air quality rating! The smoke from the Alberta forest fires are really getting on my nerves! #wildfires pic.twitter.com/qMDa4MsDCO

Morning mist on the farm here in Alberta…NOT! Smoke is so thick I can’t see my neighbors. 10000 climate refugees now evacuated from northern communities. pic.twitter.com/aW1r3ShKNM

Smoke from wildfires in northern Alberta is causing poor air quality and reducing visibility in some areas. From my job, looks like this 😔 pic.twitter.com/QorYUurO12

The wildfire smoke in Alberta is terrible. This is the view from our Calgary office today. On clear days we can see out to the mountains from this same window. Our thoughts are with everyone affected and all first responders helping. #ABfire https://t.co/kQ53IYKYH9 pic.twitter.com/Jf4jHF5hGa

The smoke from forest fires in northern Alberta blanketed the capital region and maxed out the air quality index at 10+#yegsmoke #abfires #ExtremeWeather #apocalyptic pic.twitter.com/4mJcZO3DlF

The climate anxiety I’m experiencing from the smoke in Alberta (and the questions my kids are asking me about it) would be greatly lessened if someone in power was DOING SOMETHING – ANYTHING EVEN SMALL THINGS BUT BIG THINGS WOULD BE AWESOME- ABOUT IT.

Waking up to very poor air quality in Calgary this morning. This is our sun as shot due to forest fire smoke. I spent a late night with son in ER who has heart issues(he’s fine) triggered by smoke. Take care out there today in Alberta. Thoughts to all affected ❤️. pic.twitter.com/IX1gCBXXw9

We don’t have summer here in Alberta – we have smoke season.

If you live in Alberta, look outside. This smoke shouldn’t be our new normal. We. need. to. do. something. #abfires

If you are seeing this, please send some prayers for the people of Northern Alberta who are facing major wildfires. Tens of thousands have been evacuated & more are on alert. This is outside my house 6 hours south of the fires. The sky is all smoke no cloud 😪 can you see the sun pic.twitter.com/H07FB4wU5c