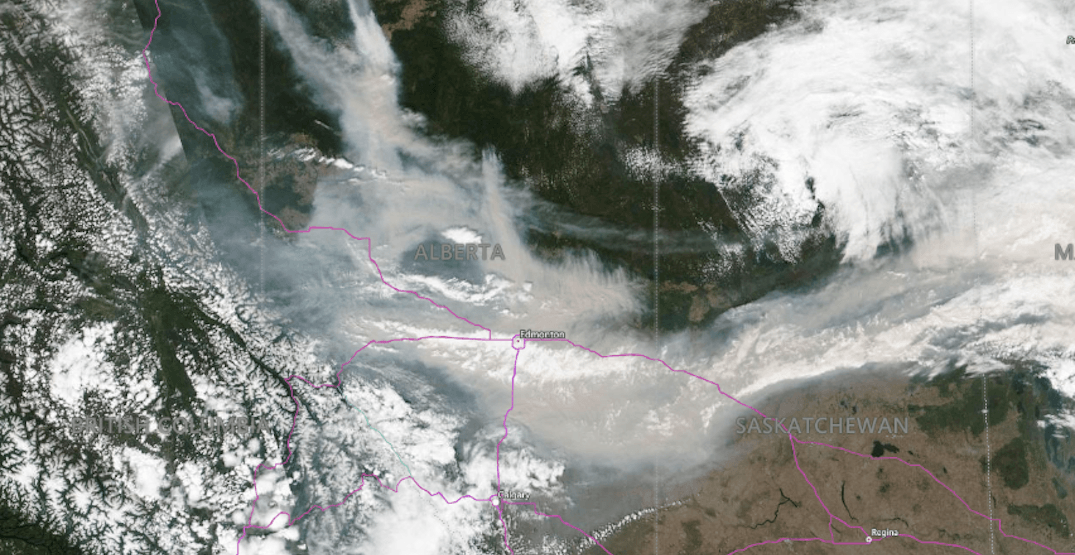 Smoke from Calgary wildfires as seen from space (Zoom Earth)

Things have gotten much worse for Alberta.

The nine out-of-control wildfires currently burning throughout the province saw significant growth over the past 24 hours, with a total of 374,768 hectares having been burned through by May 31.

Alberta Wildfire’s Christie Tucker spoke to media with an update Friday morning, stating hot and dry conditions in Alberta have caused the fires to spread at a much faster rate than usual.

“The last 24 hours have been an extremely challenging time for firefighters in Alberta,” she said.

“Because of the ongoing dry and windy conditions and the very low relative humidity, we saw fires moving very quickly, even at night when they wouldn’t traditionally be moving so quickly.”

Tucker stated that the Chuckegg Creek Wildfire, the largest fire currently burning in Alberta, had grown to 230,000 hectares as of this morning, and had been spread south by 30 km between noon on Thursday and 4 am Friday morning — a rate of 23 metres a minute.

The most recent update from the Government of Alberta, which was released at 7 pm Thursday night, noted that 2,300 wildland firefighters and staff, approximately 200 helicopters, and 27 air tankers and heavy equipment are currently on the ground throughout the province, battling the following fires:

Mandatory evacuations have been called for the following areas:

Slave Lake, an area where evacuees from High Level fled to last week, is now on an eight-hour evacuation notice itself.

The impacts of the fire have been felt all around the province, with the City of Calgary registering as “very high risk” on Environment Canada’s air quality health index and the skies in Edmonton turning orange as a result of the smoke that has blown in.

According to Tucker, there does not appear to be much help in the way of precipitation in the foreseeable future:

“Conditions are stabilizing a little bit today, but we still don’t have any foreseeable relief in the conditions,” she said.

“We are expecting fires to continue and we will continue to fight them with the assistance from across Canada that we’ve been getting.”