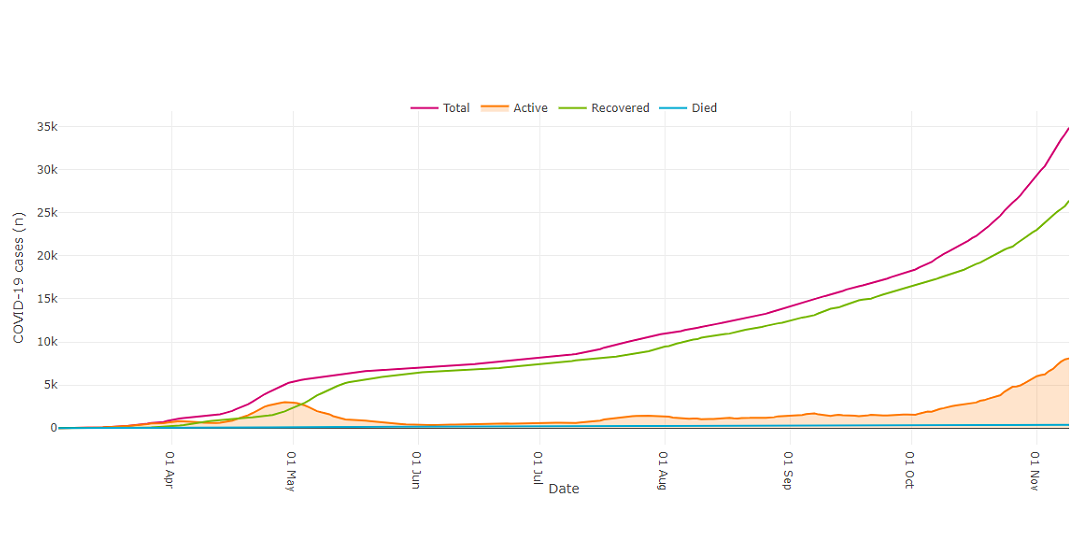 Active cases of COVID-19 are higher than they’ve ever been in Alberta.

New numbers from the Province of Alberta show that the active case count has reached above 8,000, registering at 8,090 as of November 10.

The new curve surpassed the previous high of 3,021 that we saw back at the end of April, and has been climbing all throughout October and November.

Hospitalizations and ICU admissions are both higher than they’ve ever been as well, at 207 and 43, respectively.

The case fatality rate in Alberta has reached 1.1%, the hospitalization rate is at 3.7%, and the ICU admission rate is at 0.6%, according to the province.

COVID-related hospitalizations also saw an initial bump back in April, though saw a spike in July as well.

Similar to the active case chart, hospitalizations can be seen steadily climbing higher than they have ever been throughout the fall.

Alberta’s Chief Medical Officer of Health Dr. Deena Hinshaw imposed new public health measures over the past week in an effort to reduce the spread of the virus.

Hinshaw also warned that stricter measures may be necessary if the current ones do not affect the rate of transmission over the coming weeks.

As always, Albertans are encouraged to practice safe physical distancing, wear a mask when out in public, maintain proper hand hygiene, and stay home if they are feeling sick.