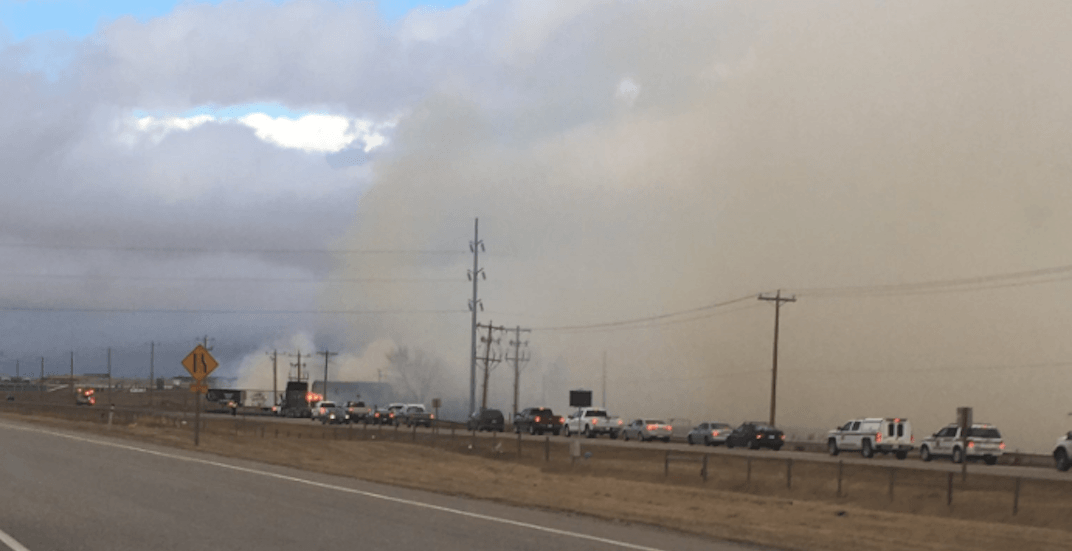 UPDATE at 7 pm: The evacuation centre has been changed to Genesis Place at 800 East Lake Blvd NE, Airdrie.

A fire is burning just off of Deerfoot Trail south of Airdrie.

Witnesses are sharing videos of the fire and smoke on social media, as traffic along the highway is at a crawl.

The Sharp Hill community is being evacuated, according to a release from the RCMP.

“Airdrie RCMP and fire crews are currently evacuating residents of the Sharp Hill neighbourhood on the South East side of Airdrie. A fire near Hwy 2 is being moved east, towards Sharp Hill residences at a high rate of speed due to sever winds,” the release read.

“Evacuated residents are being asked to attend the No Frills store on Yankee Valley for the time being. Airdrie RCMP Victim Services are at the No Frills parking lot and will register evacuees.”

One witness posted a video on Twitter, expressing her shock at the situation.

“Those houses, I would be freaking out,” she said in the video. “Oh goodness. And of course, Deerfoot going northbound is at a crawl.”

@660NEWS huge fire in airdrie. Being rerouted. Not sure how we will get home pic.twitter.com/kejHD8N8El

Earlier today, Environment Canada issued a Special Weather Statement warning of high winds in the area, which surely is not helping to calm the flames.

Fire on the way to Airdrie along highway 2. #yyc #abstorm pic.twitter.com/UbIxsOTK3P

According to a release from the City of Airdrie, residents are not only at risk of the fire, but also of power outages due to the high winds.

“Residents are asked to stay away from the area [where the fire is],” the release read. “There is reduced visibility in the vicinity, please use caution. Power outages have been reported in Kings Heights, Ravenswood and Sharp Hill.”

The City of Airdrie urges residents to monitor airdrie.ca for further updates.