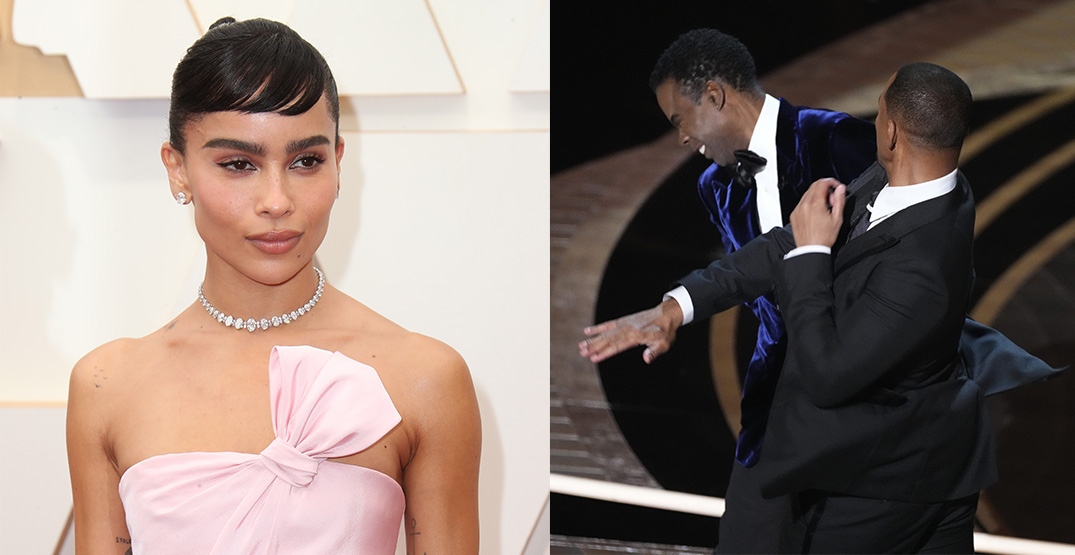 If you’re wondering why Zoë Kravitz is trending on Twitter, it’s not for her starring role as cat woman in The Batman.

The actress sparked backlash after taking a jab at Will Smith for slapping Chris Rock at the 94th Academy Awards.

On Tuesday, she posted two photos of her Oscar night dresses on Instagram, one with the caption, “Here’s a picture of my dress at the award show, where we are apparently assaulting people on stage now.”

And the second with the caption, “And here is a picture of my dress at the party after the award show — where we are apparently assaulting people on stage now.”

She’s referring to the Sunday night incident where Will Smith slapped Chris Rock after the comedian joked about Jada Pinkett Smith’s shaved head. For background, the actress had to shave her head as a result of her alopecia.

The Batman star’s Instagram comments are now disabled, but she also replied to a comment asking if she didn’t support Smith defending his wife. People immediately went to Twitter with receipts of Kravitz’s own problematic past.

cannot believe y’all were just sitting on all of these zoe kravitz receipts pic.twitter.com/Nv4ZezSfeJ

Many users resurfaced Kravitz’s comments from a 2013 V Magazine interview where she mentioned Smith’s son, Jaden.

The actress, who was 24 at the time, made some questionable comments about Jaden, who was 14.

“There were moments that I was hanging out with Jaden and thinking, I can’t believe you’re 14, I have to check myself, like what I say to you,” she said in the interview. “He’s so handsome. I was always like, when you’re older, you know, we’ll hang out… Nope, that’s inappropriate. You’re 14.”

People on Twitter accused her of making what they see as “predatory” comments.

zoe kravitz supports known abuser alexander wang, made predatory comments about 14 year old jaden and dated ezra miller when they were 17-18 and she was 20+ but wants to speak about will and draw the line at a slap pic.twitter.com/M6u7KDz1BU

Many also called Kravitz out for being friends with American fashion designer Alexander Wang, who has been accused of sexual harassment.

zoe kravitz being friends with a literal abuser yet saying will smith was wrong is hilarious. industry in a nutshell

“The rise and fall of Zoë Kravitz happened within one month,” said one Twitter user.

the rise and fall of zoë kravitz happened within one month pic.twitter.com/nSI0ZqR7nf

It’s a point of contention that has been brought up by other famous people criticizing the slap. Fans are calling out the hypocrisy of these celebrities, damning Smith when they themselves have been problematic.

i’m seeing everyone getting aired out and i’m living for it. zoe kravitz being a pedo w jaden smith + being friends w alexander wang, jim carrie being a menace on set multiple times, and judd apatow not saying shit about james franco’s behavior. air them ALL out. https://t.co/UxbblbDVwd

On Tuesday, Canadian actor Jim Carrey weighed in on the incident, saying he was “sickened” that the crowd gave Smith a standing ovation after he won the best actor award.

People on Twitter were quick to point out his stance against vaccinating children.

Jim Carrey thinks vaccines cause autism so forgive me for not giving a shit about anything he says. https://t.co/MfR5F9AKy0

And a video of him forcibly kissing Alicia Silverstone at the 1997 MTV Movie Awards. Carrey was 35 years old, and Silverstone was just 19. The video, which was shared by Twitter user @ycsm1n, shows Silverstone uncomfortably trying to push the actor away.

The debate about the incident has been ongoing, with fans both disagreeing and agreeing with Kravitz’s and Carrey’s stances.