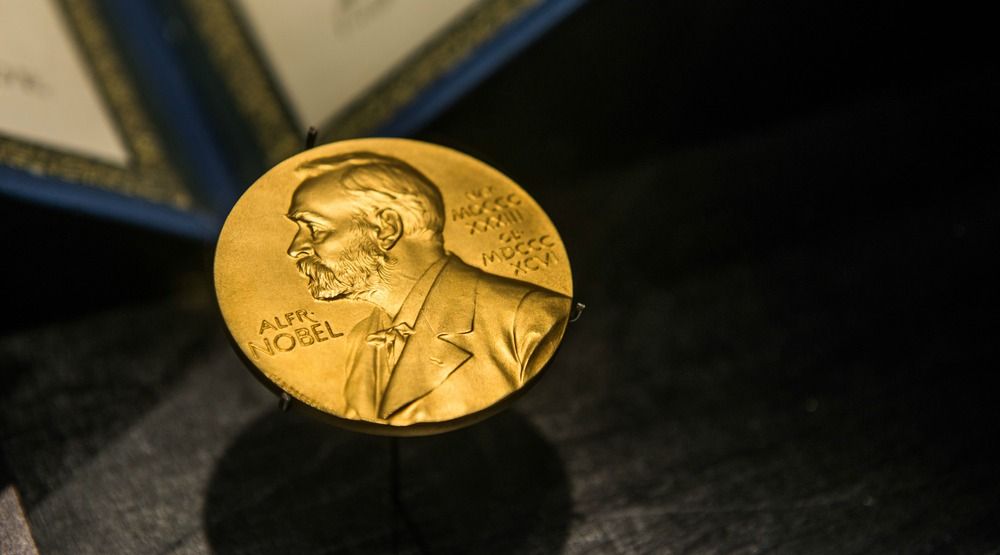 When I saw Bob Dylan trending this morning, I worried that he had died. But it turns out he had just won the Nobel Prize for Literature. Much better outcome for Bob!

I have no hate for Dylan. I most definitely consider song writing an art form, I think he’s great (but no Leonard Cohen), and am happy for his win. This piece has absolutely nothing to do with his merit. This is about the fact that Dylan has now joined an illustrious and extremely long list of Nobel Prize winners which, in essence, is a boys club that predominantly includes men and precious few women.

“Come on, it can’t be that bad!” I can hear some of you thinking.

Since 1901 the Nobel Prize has been awarded to those who have, as Alfred Nobel put it, “conferred the greatest benefit to mankind”. The grand tally consists of 836 men and 49 women. So basically while all the male winners could max out the capacity of a concert venue like Montreal’s Club Soda, the grand total of women who have won a Nobel Prize in over a century (115 years to be exact) would fit comfortably in an average city bus. And you’d still have room for luggage.

We’re talking a total of under 6 percent of all winners are women. How can we comprise more than half the world’s population and yet have managed to do so little worthy of the highest honours? Are we that lazy and underachieving, ladies? Or is there *gasp!* something systemic at work here?

“But you can’t possibly factor in the first 50-60 years or so! Things have improved drastically and more women are being recognized every single day,” I can hear you ready to reply.

Of all the Nobel Prizes for 2016 that have been awarded so far, not one has been given to a woman. Not a single one. Is there a possibility that they’re saving someone for the big finale? Perhaps, who knows? I don’t know how judges decide who is of most benefit to “mankind”, but it doesn’t often appear to be women. But for the moment, while I’m writing this, the grand total is a big fat zero. Well done.

I’m not belittling or discounting the successes so far. Sure, we’ve had some solid wins over the years. Pearl S. Buck, Maya Angelou, Toni Morrison, Alice Munro, Marie Curie, Malala Yousafzai, and Aung San Suu Kyi, but most of them have been recent recipients and even there, if you look at the categories, women have been glaringly absent from fields like medicine and the sciences, which is, of course, not accidental, considering how often women are dissuaded from entering STEM fields.

Even some of the winners have had to experience so much adversity and bad luck that I can’t help but wonder if it’s part of the prerequisite for being acknowledged sometimes. I mean Malala Yousafzai was shot in the face for God’s sake and almost died and Burmese politician Aung San Suu Kyi had been under house arrest for years at the time she was finally awarded with a prize and people remembered where she was.

Even poor Marie Curie, who is the only woman to have ever been awarded the Nobel Prize twice (once with two men and one on her own) slowly and accidentally poisoned herself and died of radiation, so that’ll teach her to be so eager and industrious. So, yeah, fine, we’ll give it to you twice, but now you must expire to serve as a warning to others. It’s like James Bond’s love interests all over again. Sure, out of all the women, you get him, girl, but we all know you’re going to die, so was the sex really worth it?

Of course I’m being facetious, but there’s a serous point to be made here. Women’s contributions continue to be undervalued and undermined – whether purposefully by some or subconsciously by others. Looking at these numbers one can’t help but wonder whether systemic sexism and exclusion play the biggest role, or whether it’s how women are perceived in this world that lands the final blow.

Whether it comes in the form of male readers choosing to praise Philip Roth and Ernest Hemingway for the umpteenth time while they’ve never once read Joan Didion, Margaret Atwood, or Zadie Smith, professors and writers looking down on women’s literature as “chick lit”, whether it’s scientists (and Nobel Prize winners, by the way) talking about how women in labs are “distracting”, whether it’s a presidential candidate bragging about “grabbing women by the pussy”, whether it’s the UN deciding to appoint Wonder Woman as its women’s empowerment ambassador, because who needs real women as role models when fictitious cartoon characters will do just fine, it all comes together to paint a picture in which women are often not seen at all or seen as just the pretty, insignificant details in the background.

It all adds up and it all matters. None of this is a coincidence, is what I’m saying. Recognizing that is the first step. Doing something to change that is, of course, the next and most important one.