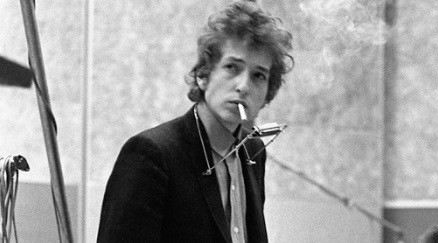 “I think of myself more as a song and dance man.”

So said a young Bob Dylan at a San Francisco press conference in 1965. Of course, Dylan was infusing the room with the same level of irony many of his greatest songs would hold, but he was also doing what Dylan does best – eluding the question, and leaving us to find our own answers for his words.

Well, the Nobel Academy found an answer in Dylan’s half century of lyrics, deciding to bestow the Minnesota native with their prestigious Nobel Prize for Literature “for having created new poetic expressions within the great American song tradition.”

Poet, singer, writer, musician, Dylan stand out for his songs that rise above the pop-culture collective of American music since he first introduced his, um, ‘unique’ voice to the world with 1962’s eponymous debut album that featured 11 folk standards and two original songs.

Since then, Dylan has gone on to write some of the most famous – and most poetic – songs in the English language. How’s this for a catalogue:

Blowin’ in the Wind
Mr. Tamborine Man
Like a Rolling Stone
The Times They Are a-Changin’
Tangled Up in Blue
Hurricane
Desolation Row
Simple Twist of Fate
Dont Think Twice, It’s All Right
Boots of Spanish Leather
Chimes of Freedom
Gates of Eden
Knockin’ on Heaven’s Door
All Along the Watchtower
It Ain’t Me, Babe
Shelter From the Storm
Visions of Johanna
If You See Her, Say Hello
A Hard Rain’s a-Gonna Fall
Rainy Day Woman #12 & 35
Masters of War
Positively 4th Street
Sad-Eyed Lady Of The Lowlands
Only a Pawn in Their Game
Girl From The North Country

Dylan becomes the first American to win the Nobel Prize for Literature since Tony Morrison in 1993, and the first musician ever. His lyrics and music are studied in universities around the world.

Here is Sara Danius, literary scholar and permanent secretary of the 18-member Swedish Academy, on why Dylan deserved the prize:

“He can be read and should be read, and is a great poet in the English tradition” https://t.co/g7CnFBlkNB

Do yourself a favour, and spend a little time with Bob today.