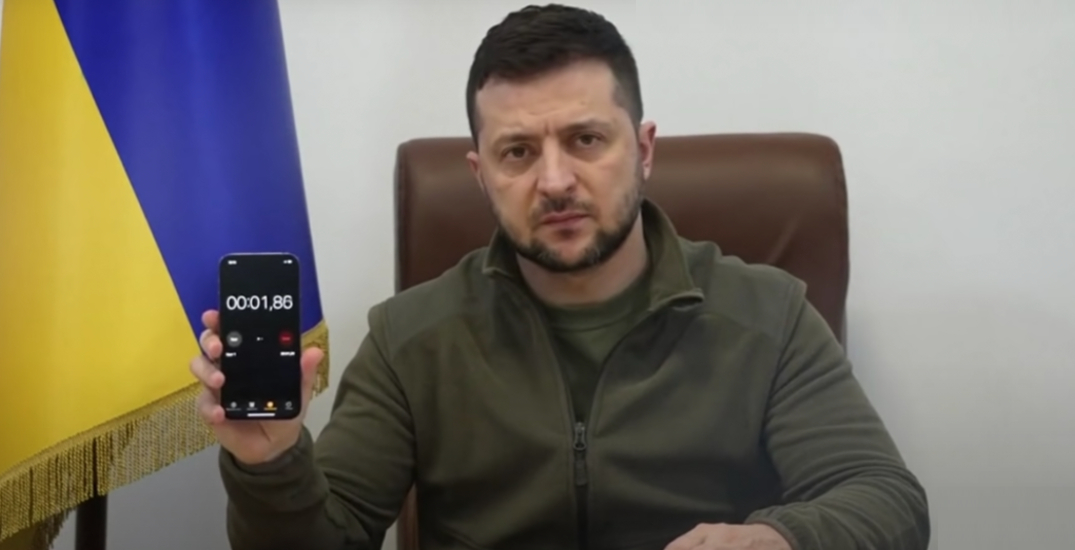 Office of the President of Ukraine

During a virtual address on Monday, Ukrainian President Volodymyr Zelenskyy invoked the public’s empathy for Ukrainians bearing the brunt of war by playing an audio clip on his phone.

“Don’t be scared,” he began. “You’ll listen to the sound we’ve been living with for the past 25 days. This sound has become normal in our city.”

A war siren blared on Zelenskyy’s phone for about 20 seconds as he held it up with a timer on screen for viewers to see.

“This was only 20 seconds — but we’ve been listening to it for hours…days…weeks.” he said after pausing the clip. “Our people hear it all the time, and they get their children and elderly and head to underground bomb shelters to stay safe from Russian rockets and bombs.”

He stressed how the Ukrainian people are trying to live their lives with this sound — going to work, treating the injured, trying to sleep, giving birth to children, and even dying.

“In three weeks, 115 children have been killed,” Zelenskyy noted. “This is the worst war in Europe since World War II.”

Zelenskyy has been making efforts to show people in other parts of the world what being in Ukraine during the Russian invasion is like.

Last week, he spoke to Canadian parliamentarians in a virtual address, where he set the scene of war that left people with chills.

“Imagine, each of you, that at 4 am, you start hearing explosions,” Zelenskyy asked in the March 15 address. Then he turned to Canadian Prime Minister Justin Trudeau.

“Justin, can you imagine you and your children hearing all these severe explosions — bombing of airports, bombing of Ottawa airport, tens of other cities of your wonderful country… Can you imagine that?”

The next day, he recreated the sentiment in front of the US Congress, contextualizing it for Americans by reminding them of events like 9/11 and Pearl Harbour, which changed the course of American history forever.