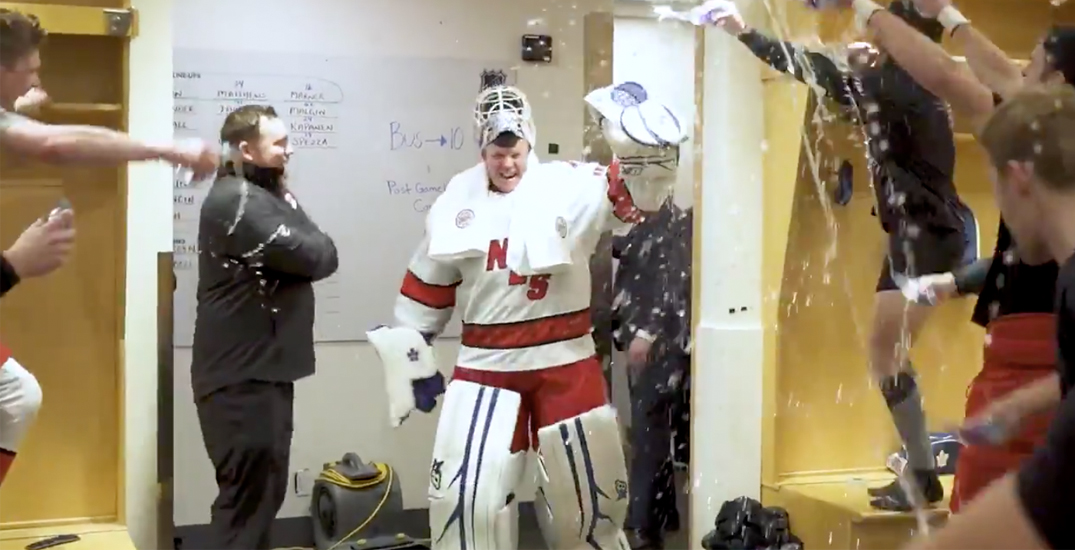 A Zamboni driver for the Toronto Marlies made his NHL debut Saturday night as the emergency backup goalie for the Carolina Hurricanes in their game against the Toronto Maple Leafs.

Dave Ayres was pulled onto the ice after both the Hurricanes’ goalies got injured, leaving them without a healthy goaltender to finish the game.

During NHL games, the home team must provide an emergency backup goalie for situations like these. Ayres had been on standby before, but never called into a game.

It was his first time on the ice as an NHL player, and he helped the Hurricanes beat the Leafs 6-3.

“It was wild. It was pretty fun,” Ayres said after the game.

This interview says it all.

Dave Ayres will have a memory for a life time. pic.twitter.com/upqccSjVVm

He received a lot of love for his efforts.

The Caroline Hurricanes shared a video of Ayres coming into the locker room after the game and receiving a victory shower. The team captured the moment “a memory we’ll have forever.”

The Canes have also updated their Twitter bio to say “DAVE AYRES THE GOAT.”

A memory we’ll all have forever pic.twitter.com/LUxqs8o3Wr

And fellow players appreciated his skill.

His wife, Sarah Ayres, also tweeted how proud she was.

I am the happiest, proudest woman on the planet because my human got to live out his ultimate dream.
…I’m also surprised I still have a voice. https://t.co/qTglhZypG5