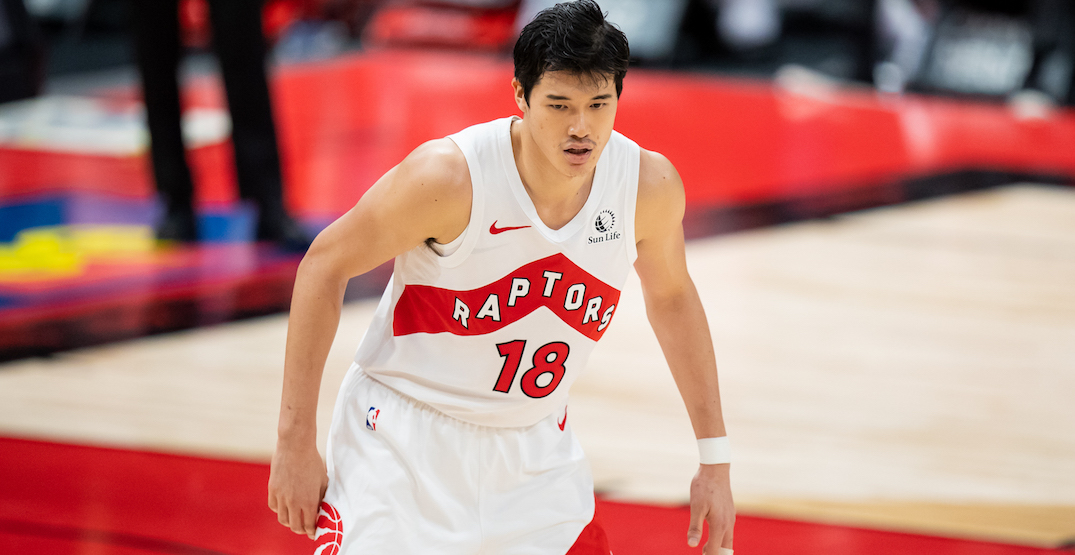 The set-up was perfect — it was a national holiday in Japan. All the NBA hoop heads in the Land of Rising Sun anticipated watching the league’s only two Japanese players, Yuta Watanabe and Rui Hachimura, go toe-to-toe.

But Watanabe’s left ankle sprain prevented him from suiting up with the Raptors against his countryman, as Toronto squashed the Washington Wizards 137-115.

The second half of the NBA schedule is TBD and there may be another opportunity for Japanese fans to witness last night’s highly-anticipated match-up.

What remains certain is Watanabe will continue to gain Raptors’ adoration from Japanese fans. According to Sports Illustrated, 46% of all jersey sales on Japan’s online NBA store have come from Watanabe and Hachimura, and Yuta’s hustle has helped Toronto sell the most merchandise.

The Raptors’ Long History with Japan

The Raptors have long been wooing Japanese fans since the #WeTheNorth campaign launched in 2014. Toronto embraced its outsider identity and initially attracted some Japanese NBA fans.

“The biggest draw for me was cheering for a team that others weren’t rooting for,” said the Twitter account holder of @RaptorsInfoJPN, who creates content of mostly localized Japanese translations of English tweets by Raptors’ journalists.

“There’s lots of Lakers and Warriors fans in Japan, and many fans want to support teams that revolve around a superstar (or superstars)… but initially, I was really drawn by Toronto’s uniqueness, their outsider identity, being the only Canadian NBA team.”

After subsequent playoff exits, the Raptors acquired Kawhi Leonard, and becoming champions proved to the world that the only NBA team outside the U.S. could win it all without a lottery pick.

After that majestic summer of 2019, the Raptors headed to Japan to play two preseason games against the Houston Rockets in front of 20,000 fans. The Japanese e-commerce company Rakuten hosted the event and launched the NBA Rakuten app days prior to the event.

This wasn’t the first time Rakuten made inroads into the NBA. In 2017, they sponsored the Golden State Warriors’ jerseys, capitalizing on Steph Curry’s popularity in Japan.

What Toronto can learn from ‘Rui Mania’

Watanabe’s rise provides a perfect opportunity to further consummate the Toronto-Japan relationship. Skill-wise, Watanabe is far from Hachimura, but the Wizards recognized the magnitude of Rui’s Japanese following early.

The Wizards sold its marketing rights to Japan’s NEC Corporation and hired a Japanese media team to localize content around him and his team.

According to Zac Ikuma, the Japanese Wizards Twitter account had one of the highest engagement rates in the NBA during the 2019-20 season.

“There is a lot of chatter and anticipation among fans and journalists about whether ‘Watanabe will finally receive a regular NBA contract,’ so there is a lot of interest among the more invested fans too,” said Ikuma, whose job also entails closely monitoring NBA social media content.

Hachimura’s impact has grown NBA interest in Japan and Watanabe’s increased minutes has added gas to the fire. According to SportsPro Media, NBA Rakuten’s subscribers have grown by 600% prior to this season. NBA Rakuten (an OTT platform) is the sole licensed broadcaster of all NBA games in Japan.

What this means for Toronto

Watanabe’s stark contrast to Hachimura is precisely his competitive advantage.

Currently fifth in the East, the Raptors continue to climb out of mediocrity. Watanabe will continue to play a bigger role, having already played in the same amount of games (18) as he did last season for the Memphis Grizzlies.

Even if Watanabe is currently sidelined, the impact of ‘Yuta Mania’ is here to stay — all the Raptors fans across the Pacific will continue to cheer on his teammates from the North.