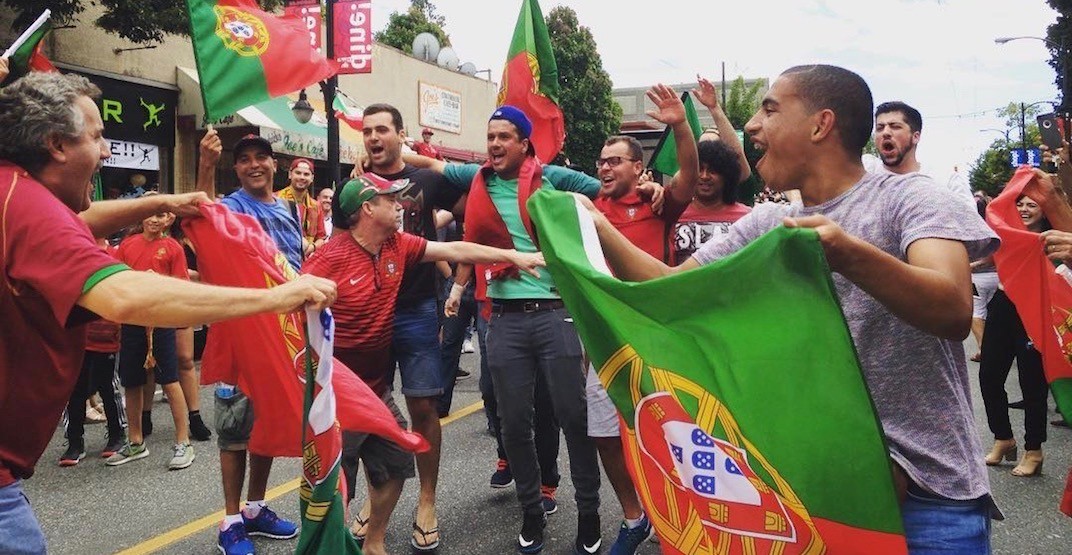 As the 2018 FIFA World Cup kicks off next week, we’re sure that you’ve all mastered face painting techniques and are prepared to cheer for your favourite teams, here’s where to watch based on which country you’re cheering for.

While we have already compiled a general list of great restaurants and bars to watch the games in Vancouver, we also understand that the tournament can be a stressful time ― because you never know which team the person sitting next to you at the bar is supporting.

And when one beats the other, that can always cause some tension between you and your next-seat neighbour.

To help solve that problem, we’ve put together a list of team-oriented places in Vancouver.

So, instead of fighting over what the best team on the planet is, you can follow this list and share your happiness (or sorrow) with your fellow supporters through many pints of beers.

Germans are crazy about soccer — we all know that. Deutsches Haus’ large beer hall will be used for public viewing and it can host more than 600 people. You can watch the defending champion play on a 17-foot display screen, and have we mentioned their large selection of authentic German beers? Deutsches Haus will screen every game of the tournament, while German food like Schnitzel and Spätzle will be served. Put on your German jersey (or lederhosen), grab some steins, and cheer for Die Mannschaft.

If you are a fan of Cristiano Ronaldo aka CR7 you should come here and watch what might be his last World Cup ever. As the 2016 European Champion, the Portugal men’s national team is hungry for another win. The Portuguese Club of Vancouver will screen the tournament on four big screens. They will have pastries and sandwiches for early games, and you can expect some bifanas (Portuguese pork sandwich) and beer specials for later games.

Kangaroo burger, Aussie Tucker, Oz Fries — you might not know what these are exactly, but that’s okay because this restaurant will help you enjoy everything Aussie style. Located in the heart of downtown Vancouver, Moose’s Down Under is always filled with Australian foodies and Socceroos supporters. They will screen their first Socceroos game at 5 am (this is how you define true fans) on Thursday, June 21, while featuring the ‘Aussie Fry Up,’ a popular dish back home. Get ready to hear some great Aussie accents, chug some authentic Aussie beers, and have fun cheering for ‘straya on their 14 TV screens.

While La Casita is not normally open during the day, the restaurant is championing the World Cup spirits and will screen games starting at 7 am and later. A special breakfast and lunch menu for the games will also be put out soon. Enjoy free chips with guac and salsa, drink super Margaritas that are the size of your head, and (hopefully) see some stunning goals from Javier Hernandez.

A post shared by The Mexican AntojitosyCantina (@themexicanvan) on May 4, 2018 at 7:41pm PDT

This traditional Mexican restaurant has one large wall projector, and they plan to show the first two Mexican games. They have amazing tacos and quesadillas, and they also carry a wild selection of beers and tequila. The national team will play their first game against the defending champion, Germany, on Sunday, June 17.

As a bar with an emphasis on Belgian styles and craftsmanship, Biercraft is home to many fans of the Belgian Red Devils. They have over 20 beers on tap, with more than 100 beers on their bottled beer list. And trust us, Hoegaarden + Belgian frites = the best combination ever.

Brazil will kick off the tournament with a game against Switzerland on Sunday, June 17, and Boteco Brasil is ready to welcome some passionate soccer fans. They offer $4.50 pints, $6 Caipirinhas (Brazil’s national cocktail), and food specials. Patrons here will also have a chance to win a free jersey. Scream “Vamos Brasil,” dance to some Samba, and wait for your boy Neymar’s hat-tricks at this spot.

Second Floor will show the World Cup games on all 82 of their screens (the largest one stands at over 190”), including those that start at 5 am. This location is home to many Brazil supporters. They will have beer specials throughout the tournament, and $10 breakfast will also be served for the early morning games. You also have a chance to win some goodies.

This East Broadway location is Vancouver’s first Peruvian inspired eatery, and it has become home to many true Peruvian soccer fans. This summer, they will be playing all games that start after 7 am. Come here if you want to down some $3 Tequila shots, support Peru, and enjoy some yummy Peruvian tapas.

Located on the ground floor of the Dominion Hotel in Gastown, the Lamplighter Public House is always down for some sports and live music. They are the home of the official Manchester United FC Supporters Club in Vancouver, and you can find loads of England supporters here this summer.

You don’t have to worry about flying to England to get the local bar vibe because when the London Pub finishes decorating for the World Cup, it will feel just like the old country. They have eight screens, a projector system, and will have special breakfast menus for the morning games and a variety of drink specials. Come have a pint (or a few), a full English breakfast, and cheer for the Three Lions with some true English spirit.

The pub shows rugby, Irish sports, and English Premier League all year round, and they will be screening tons of World Cup games this summer on their 11 TVs and one projector screen. They will kick off this World Cup season on Friday, June 15, screening a game between Portugal and Spain at 11 am.

Second Floor is also a popular place for France supporters. They will show the World Cup games on all 82 of their screens (the largest one stands at over 190”), including those that start at 5 am. The will have beer specials throughout the tournament, and $10 breakfast will also be served for the early morning games. You also have a chance to win some goodies.

Mahogany And Sons’ False Creek location is where all the supporters of ‘Les Bleus’ gather to cheer for their team during the 2018 FIFA World Cup. It is showing all of France’s games and without cover.

The Croatian Cultural Centre will have an open house day on Saturday, June 16, as the Croatia men’s national team kicks off at noon against Nigeria in the 2018 FIFA World Cup. Doors will open at 10 am, while fans get revved up for the game with live music. They have nine jumbo projection screen, and you can also enjoy some specialty beers imported from Croatia.

As one of the best Iranian restaurants in Vancouver, Cazba will screen all Iran games this summer. Their location in North Vancouver gives a very homey vibe, and you can find some dedicated fans in front of their two TVs. Join them for some yummy Persian breakfast, and support Iran at the 2018 FIFA World Cup.

As a Japanese fusion seafood restaurant, many Japanese fans have come here for World Cup. They have six large TVs and one projector screen, and the sound will be on for the games. Although they will not be screening the early morning games this year, they will play all games that run during their regular operating hours. They will have a sharing platter special with beer for the games, and during their regular happy hour, there will also be $4.50 Sapporo lager, $8.50 sake (Japanese rice wine), and $4.99 cocktails.

As Kamei Baru’s sister restaurant, Ebisu on Robson offers sashimi, sushi, and Japanese style home-cooked dishes with a western twist. They have 10 TVs and a projector screen, and the sound will be on for all FIFA World Cup games. Their spring seasonal special will also run through the entire World Cup, which includes a good selection of sushi and skewers, starting from $2.99.

This restaurant is home to many passionate South Korea supporters. You can expect some very exciting matches, as South Korea is drawn into a group with Sweden, Germany and Mexico this year. Their second-floor bar and lounge is usually the place for screening the FIFA World Cup.