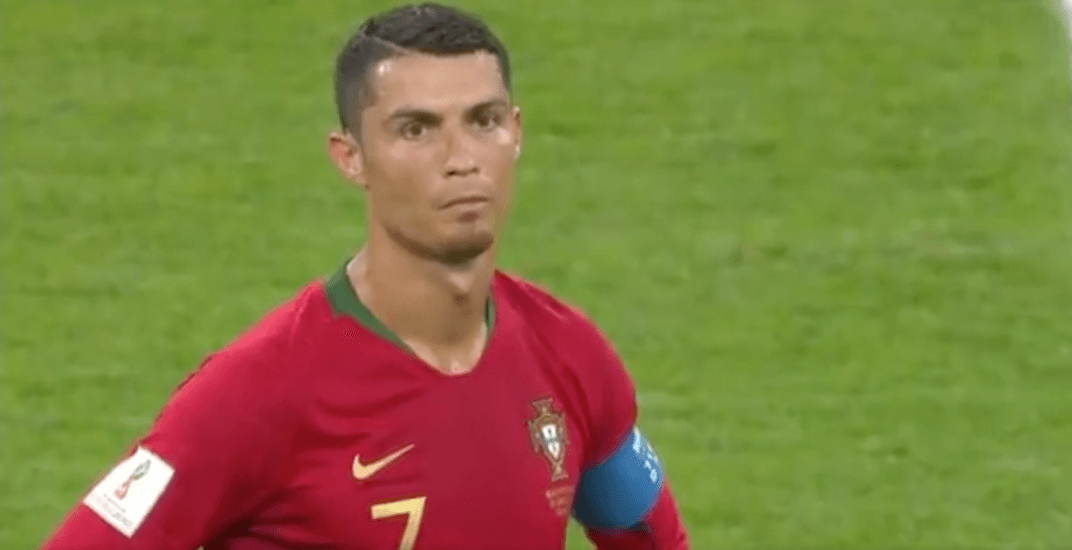 Ok, that was fun.

It doesn’t get much better than simultaneous drama involving world powers, dangerously close to being ousted from the World Cup by plucky underdogs.

That’s what happened on Monday at the World Cup.

Inches away for Iran

The task was simple for Iran on Monday.

Beat Portugal, and they would advance past the group stage at the World Cup for the first time ever.

The match ended in a 1-1 draw, but boy did Iran come close to winning it.

Ricardo Quaresma gave Portugal a 1-0 lead, after a gorgeous strike with the outside of his foot from outside the box.

Quaresma scores with outside of his foot, from outside the box to give #POR a 1-0 lead! #WorldCup pic.twitter.com/buB8nSIT1l

Cristiano Ronaldo had a chance to put the match out of reach early in the second half, when VAR awarded Portugal a penalty.

VAR, and Ronaldo, nearly reared its ugly head later on. A video review was required for a potential red card, after Ronaldo struck his opponent in the head with his arm. After some nervous moments, the decision was made to just give Ronaldo a yellow.

Should Ronaldo have received a red card here or did the ref make the right call? 🤔 #WorldCup pic.twitter.com/YSGDQvJJBB

Sick of VAR yet? Yet another controversial decision was made to give Iran a penalty in stoppage time, with Karim Ansarifard converting.

GOOOOOOOOAL!!!!!!!!#IRN scores to tie the game at 1-1 against #POR #WorldCup pic.twitter.com/yhCTuOuOdt

Time was running out for Iran’s miracle finish, but not before Mehdi Taremi had a glorious chance to send his country to the knockout round. He hit the side of the net.

#IRN was so, so, so close to completing a HISTORIC upset versus #POR #WorldCup pic.twitter.com/3amf8cu68A

Heartbreaking, to say the least.

Morocco was already eliminated from the knockout stage, but you wouldn’t know it by watching them play Spain. We were minutes away from witnessing a stunning upset, in an entertaining match the ended in a 2-2 draw.

A loss to Morocco could have eliminated Spain, so there were plenty of nervous moments when the Moroccans took not one, but two leads in this match.

Here are the goals that led to a 2-1 score late in the match:

A blunder leads to Khalid Boutaïb going in all alone and scoring to make it 1-0 #MAR.#WorldCup pic.twitter.com/9sBoEgRPUC

Iniesta sets up Isco BEAUTIFULLY and he makes no mistake to tie the game.#ESP #WorldCup pic.twitter.com/4dMz72ccDr

Youssef En-Nesyri heads it home off of the corner kick and Morocco is closing in on its first win of the #WorldCup. pic.twitter.com/rc6BGxOt3p

Spain needed a goal in stoppage time, with the help of VAR, to earn the draw. This gorgeous back heel by Iago Aspas was initially called offside. Video review overturned the call, giving Spain goal and levelling the match.

Up against the hosts from Russia, Uruguay delivered an emphatic 3-0 win to win Group A.

Luis Suarez opened the scoring in the 10th minute with a free kick goal, while a lucky bounce off a Russian defender made it 2-0 in the 23rd minute. From there, it was cruise control for the South Americans, who added a third goal in second half stoppage time.

Suarez opens the scoring with a BRILLIANT free-kick, giving Uruguay a 1-0 lead over #RUS #WorldCup pic.twitter.com/JSIdyaHqTy

Goal!!!#URU doubles their lead on a deflection! Up 2-0 on #RUS in 1st half #WorldCup pic.twitter.com/LuoIb7ukYo

Cavani puts the game away for Uruguay, giving them a 3-0 lead over #RUS #WorldCup pic.twitter.com/iLiLthQZgy

There was nothing left to play for, except pride, in the final match of the tournament for Saudi Arabia and Egypt.

His second goal of the #WorldCup is an EXCELLENT one and it gives #EGY a 1-0 lead. pic.twitter.com/m7Y2GoFflE

Everything seemed to be going right for Egypt after Essam El-Hadary, their 45-year-old goalkeeper, stopped a penalty in the 41st minute.

Essam El-Hadary has his #WorldCup moment!

The oldest player to ever play in a World Cup game makes a spectacular save on a #KSA penalty to keep #EGY up 1-0. pic.twitter.com/p13FA2ONKf

But Saudi Arabia didn’t give up. They earned another penalty before half time and this time Salman Al-Faraj made no mistake.

#KSA score its first goal of the #WorldCup!

Salman Al-Faraj steps up from the spot this time and evens the score!#WorldCup pic.twitter.com/Syah41mWpT

The match remained even until the fifth minute of injury time in the second half, when Salem Al-Dawsari finished off a gorgeous passing play to give his country a meaningful win.

#KSA WINS IT IN STOPPAGE TIME!

Saudi Arabia gets its first #WorldCup win since 1994 with a goal in stoppage time from Salem Al-Dawsari. pic.twitter.com/uuh7JpmOzk

We now know the first two matches of the knockout round, as Group A winner Uruguay will play Portugal. Spain, who won Group B, will face Russia.

There’s lots to play for on Tuesday, as Australia, Denmark, Nigeria, Iceland, and Argentina try to qualify for the knockout round, while France and Croatia look to secure top spot in their respective groups.