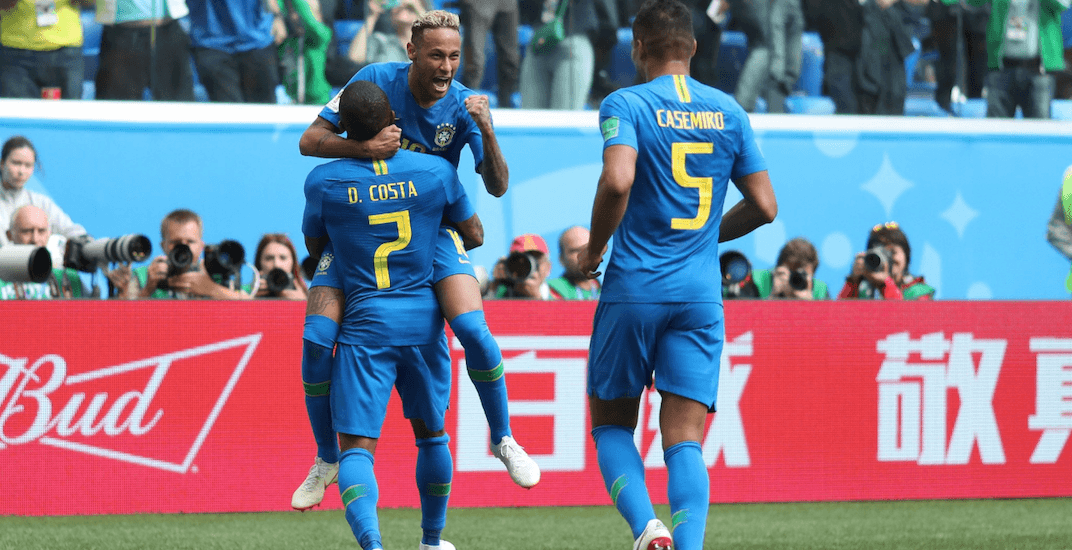 It took more than 90 minutes for Brazil to finally get the goal they needed at the World Cup on Friday, as they avoided going winless through two matches.

Here’s your daily recap of all the action in Russia:

Overmatched against mighty Brazil, Costa Rica needed to defend as well as they ever have to get a positive result. And they nearly pulled it off.

Holding 66% of possession with 23 shot attempts, compared to just four from Costa Rica, Brazil stared at a nil-nil draw heading into stoppage time.

Philippe Coutinho came to the rescue for the South Americans, scoring the winning goal in the 90th minute.

Neymar added another, to seal the deal.

probably my favorite part of brazil vs costa rica pic.twitter.com/0iCuVS3WrZ

Switzerland storms back against Serbia

Switzerland became the first team at this World Cup to win after surrendering the first goal, defeating Serbia 2-1.

Serbia got the start they were looking for, with Aleksandar Mitrovic heading home the opening goal five minutes into the match.

The Swiss answered back in the second half, courtesy of a left-footed thunderbolt from Granit Xhaka (great name, by the way).

Granit Xhaka sends a rocket into Serbia's net to tie the match at 1-1 #WorldCup pic.twitter.com/ZZoNFv9YVc

The match stayed level until Switzerland’s other X-Man, Xherdan Shaqiri (seriously, how great are these names?) got past the Serbian defenders to score the winning goal in the 90th minute.

Xherdan Shaqiri scores to give #SUI a 2-1 lead late in the game #WorldCup pic.twitter.com/2Du9AW6Rvd

And then he took his shirt off…

"Sir, this kind of behavior is not allowed at Planet Fitness and we're going to have to ask you to leave." #SUI #WorldCup pic.twitter.com/jgwsaEZvm7

Switzerland’s in great shape to move on, needing a win or maybe even just a draw against Costa Rica in their next match.

Ahmed Musa had both goals for Nigeria, scoring in the 49th and 75th minutes.

2ND SHOT, 1ST GOAL!#NGA opens the scoring to take 1-0 lead over #ISL early in the 2nd half! #WorldCup pic.twitter.com/fjMw1Ase9X

ROUND THE KEEPER, THROUGH THE HEART 💔

Musa keeps his cool & scores a beautiful goal to give #NGA a 2-0 lead over #ISL #WorldCup pic.twitter.com/TCSERCtMJC

After VAR awarded a penalty to Iceland, Gylfi Sigurdsson squandered a glorious chance to cut the lead in half, sailing the ball over the net.

Sigurdsson MISSES!❌#ISL fail to capitalize on chance to get back into game, miss penalty, #NGA still leads 2-0 #WorldCup pic.twitter.com/jcDmgO61wo

The Nigerian win was helpful for Argentina, as this man illustrates:

Argentina likely now just needs a victory in their final group stage match to advance, depending on how Iceland fares against Croatia.

Final round of fixtures:#NGA vs #ARG #ISL vs #CRO #WorldCup pic.twitter.com/vtf4k3h56S

There’s no shortage of intriguing storylines on Saturday, as we get our second look at the high-flying Belgians when they take on Tunisia. If Mexico can beat South Korea, it would set up a do-or-die scenario for Germany, who would need a positive result to stay alive.