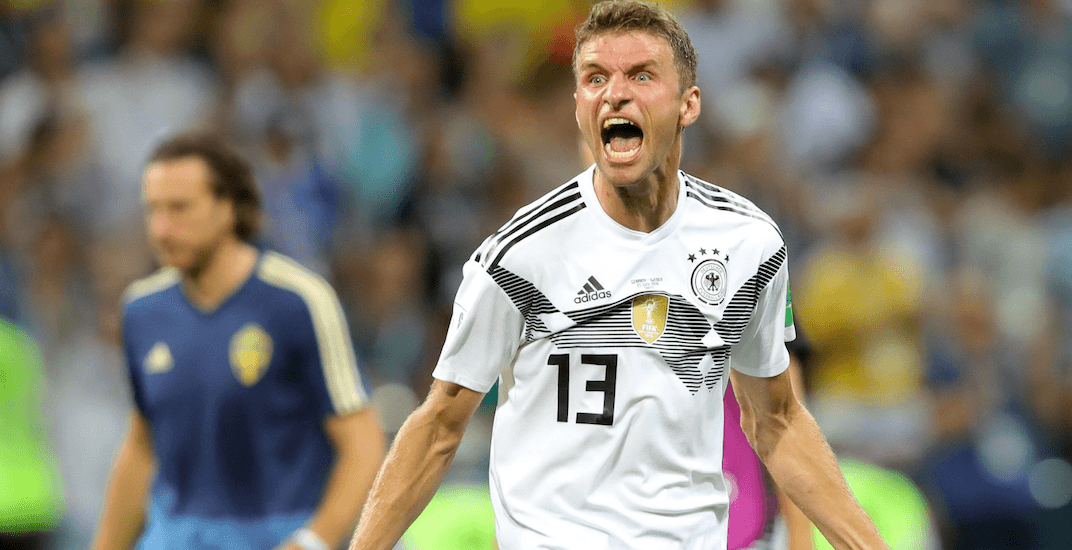 “On the brink of elimination.”

That’s not a sentence we expected to say about Germany in just their second match at the World Cup, but indeed there were nervous times for the defending world champions on Saturday.

Here’s what happened in today’s matches.

Germany needed a comeback victory, including a goal late in stoppage time, to beat Sweden in dramatic fashion, 2-1.

Ola Toivonen gave the Swedes a 1-0 lead heading into half time, with a goal in the 32nd minute.

#GER ARE ON THE BRINK OF ELIMINATION!😲😲😲#SWE scores to take 1-0 lead over the defending #WorldCup champions in the 1st half pic.twitter.com/sqGTqib07R

Germany answered back early in the second half, with a goal from Marco Reus in the 48th minute.

Reus helps #GER get right back into this match, scoring the game-tying goal. #WorldCup pic.twitter.com/AkRITnqrUm

A draw would have kept their World Cup hopes alive, but they needed a win to keep fate in their own hands. That job got harder after Jerome Boateng’s second yellow card put Germany down to 10 men.

Their prayers were answered at the last possible moment, with a gorgeous goal by Toni Kroos in the fifth minute of stoppage time.

They were on their death bed, but they’re alive now. Germany dominated scoring chances and possession, and should earn their second victory against South Korea in their final group stage match.

Carlo Vela scored on a penalty in the 26th minute and Javier “Chicharito” Hernandez made it 2-0 in the 66th minute, as Mexico stayed perfect with their second straight win.

South Korea scored in the third minute of stoppage time to cut the lead in half, as Mexico won 2-1.

Here are the Mexican goals:

Carlos Vela scores a penalty to give Mexico a 1-0 lead #WorldCup pic.twitter.com/nryx3hTEVx

CHICHARITO SCORES!!!#MEX takes a commanding 2-0 lead over #KOR after Hernandez coolly tucks it past the keeper #WorldCup pic.twitter.com/rHTcXVGiyT

Group F could get very interesting. If Sweden manages to beat Mexico in their final match of the group stage, and Germany beats South Korea as expected, we’ll have three countries tied with six points each.

Belgium is for real

Their star-studded squad scored early and often en route to a 5-2 victory over Tunisia. Romelu Lukaku and Eden Hazard had two goals each for Belgium.

Belgium now has eight goals in two games – both victories.

Here’s a selection of the best goals from the match:

Lukaku gets a chance & finishes it! Scores his 3rd goal of the #WorldCup pic.twitter.com/5QJ0HlqATY

3RD GOAL IN THE 1ST 20 MINUTES!!!#TUN scores to cut #BEL lead in half, now trailing 2-1 in 1st half #WorldCup pic.twitter.com/iOrqKUhhfW

England is back in action on Sunday, in what should be an easy match against Panama (it’s England though, so nothing is ever easy). Japan and Senegal meet, each fresh off upset victories, while Poland and Colombia search for their first wins of the tournament.