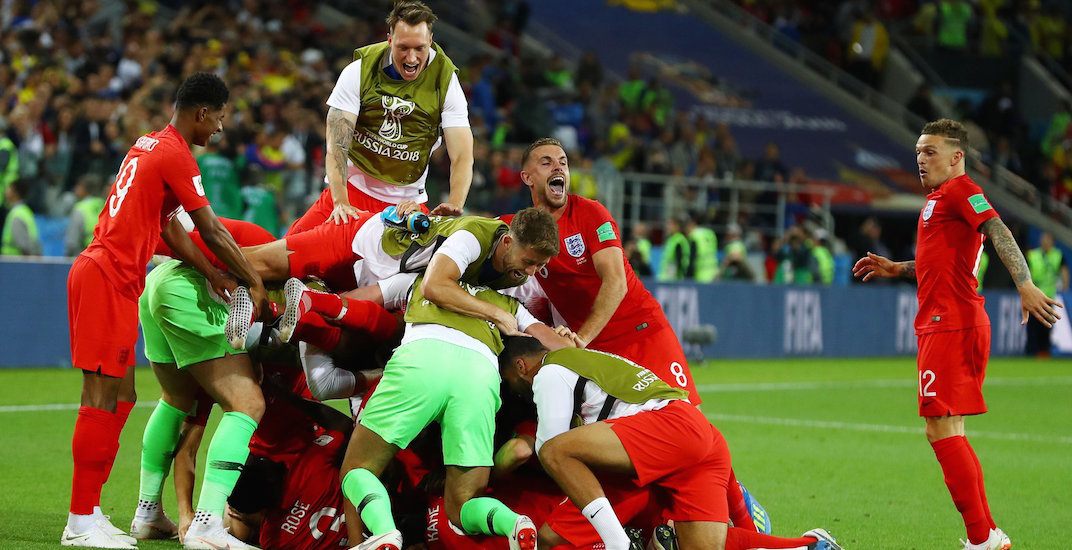 England is marching on to the quarter-final for the first time since 2006 after their first-ever penalty shootout win at the FIFA World Cup.

Truer words have never been uttered by an English soccer commentator, as Colombia presented the toughest matchup on England’s side of the draw. If they could get past the Colombians, England would be the favourite to make their first World Cup Final in 52 years.

Captain Harry Kane looked like he would put England there, after drawing a foul in the box and converting on the ensuing penalty.

The skipper puts home the penalty for his 6th goal of the #WorldCup (leader), giving England a 1-0 lead! pic.twitter.com/va4Kpxchq2

Without their injured star, James Rodriguez, would Colombia find a way to answer back? It took until the third minute of injury time to find out.

Yerry Mina was the hero, levelling the match at 1-1, forcing extra time, and eventually a penalty shootout.

With an 0-3 record all-time in penalty shootouts, English fans had to be expecting the worst. Jordan Henderson’s miss, which gave Colombia the early advantage, would have only cemented those fears.

But Mateus Uribe hit the crossbar for Colombia, giving England hope. Then a save by English keeper Jordon Pickford on Carlos Bacca gave Eric Dier the chance to be a hero.

The kick that sent #ENG through to the Quarterfinals of the #WorldCup pic.twitter.com/hLdLaMYzZT

This is how you celebrate an #ENG penalty shootout win!

After failing to qualify for the past two World Cups, Sweden is off to the quarter-finals for the first time since 1994.

The Swedes defeated Switzerland 1-0, thanks to a goal by Emil Forsberg in the 66th minute.

Switzerland controlled 63% of possession, and held a 18-12 advantage in attempts at goal. It was a missed opportunity for the 11th-ranked Swiss team, who haven’t been to the quarters since 1954.

Sweden will play England in the quarter-finals.

The quarter-finals begin on Friday, with Uruguay taking on France. The winner of that match will take on the winner of Brazil/Belgium. Sweden and England kick-off on Saturday, with the winner facing the prevailing team from Russia/Croatia.