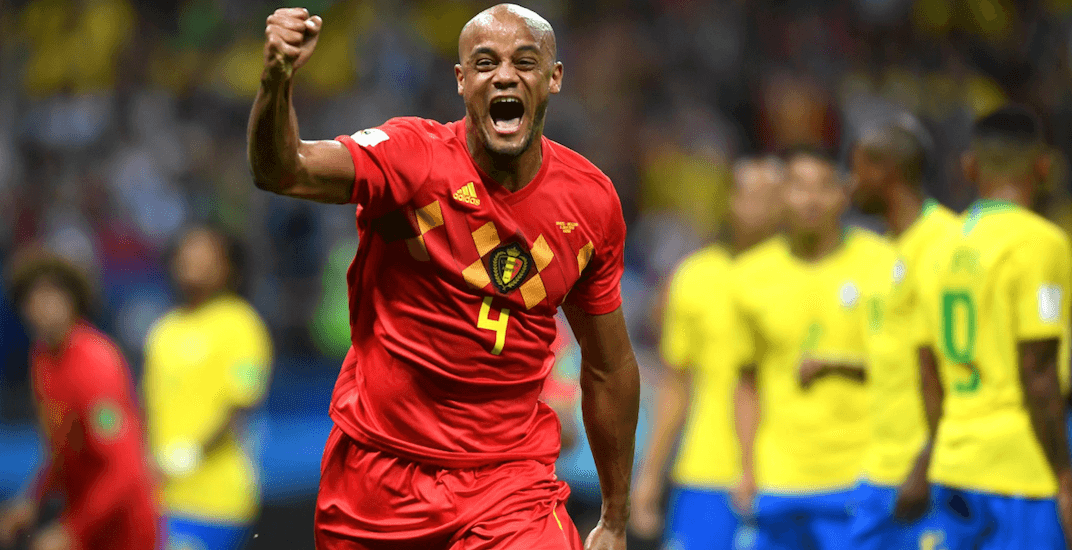 For the first time ever, the World Cup will feature a semi-final that does not include Germany, Argentina, or Brazil.

The latest powerhouse country to go home, Brazil has been eliminated in the quarter-final by Belgium.

In possibly the biggest win in Belgium’s history, they knocked off Brazil by a 2-1 score.

A Fernando Luiz Roza own goal in the 13th minute got things started for Belgium, who would extend the lead in the 31st minute.

#BEL TAKE THE LEAD!#BRA's Fernandinho has the ball ricochet off his head & into his own net! #WorldCup pic.twitter.com/BVtTU95iSr

Kevin De Bruyne scored Belgium’s second goal of the match with a thundering strike – putting Brazil into a deep hole.

DE BRUYNE WITH A LIGHTNING BOLT!⚡#BEL takes a 2-0 lead over #BRA in the 1st half #WorldCup pic.twitter.com/X8FBfmImE5

Brazil nearly dug themselves out of it. Renato Augusto’s brilliant header gave his team hope, cutting the lead in half with 14 minutes to go before stoppage time.

COUTINHO WITH THE PASS, AUGUSTO WITH THE FINISH!#BRA cut #BEL's lead in half, now trailing 2-1 late in the 2nd half #WorldCup pic.twitter.com/ly9TCnW95q

Furious pressure in Belgium’s end of the field ensued. Neymar had Brazil’s last glorious chance to level the match with time ticking down, curling a shot that Belgian goalkeeper Thibaut Courtois turned aside.

Despite controlling 57% of possession and having a 26-8 edge in attempts at goal, Brazil’s tournament ends in the quarter-finals for the third time in the last four World Cups.

France is moving on to the semi-finals for the first time since 2006, after a 2-0 win over Uruguay.

Playing without one of their star strikers in Edinson Cavani, who missed the match due to injury, Uruguay put up a good fight.

France’s Raphael Varane opened the scoring, heading home the first goal of the match off a free kick in the 40th minute.

Varane heads home the opening goal, giving #FRA a 1-0 lead over #URU in the first half #WorldCup pic.twitter.com/2OHPAYDcVT

Uruguay nearly answered back minutes later, but France kept a clean sheet thanks to this amazing diving save by keeper Hugo Lloris.

The deathblow for Uruguay came in the 61st minute, when an Antoine Griezmann free-kick appeared to fool keeper Fernando Muslera, who couldn’t handle the shot – gifting France their second goal.

Griezmann fires in a shot the bounces off Muslera's hands & into the back of the net! #FRA leads 2-0 #WorldCup pic.twitter.com/bqtGuEwt4x

France will play their European neighbours, Belgium, in the semi-final.

The final two spots in the semi-finals are on the line, with Sweden facing England and Croatia taking on host Russia.