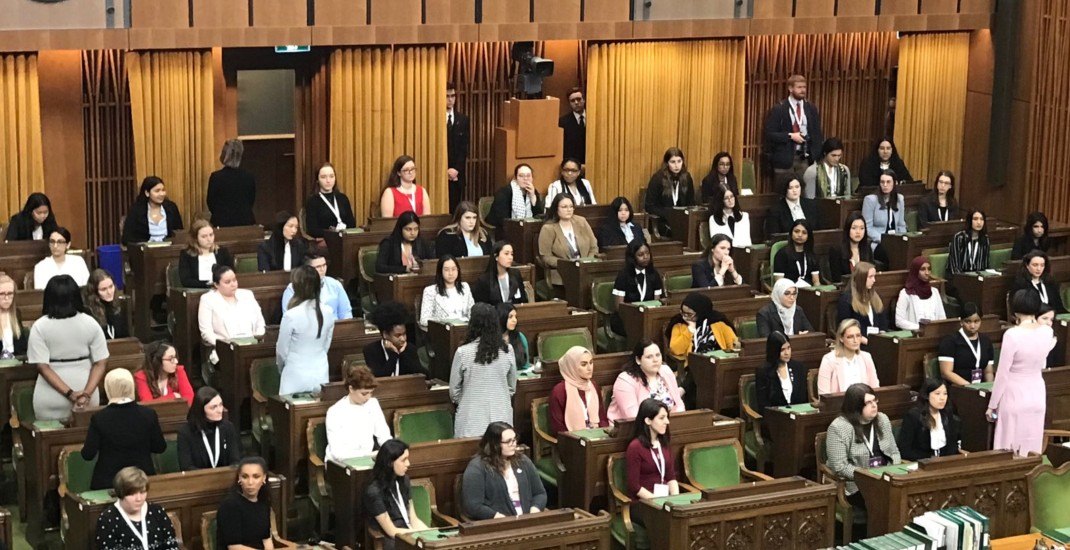 Dozens of young women turned their backs to Prime Minister Justin Trudeau in the House of Commons today, responding to the decision to expel Jody Wilson-Raybould and Jane Philpott form the Liberal caucus.

The women were delegates for Daughters of the Vote — an event that brings 338 emerging young Canadian women leaders to Ottawa to learn about federal politics.

When Trudeau addressed the group many of them turned their backs to him.

The young people of this country are the ones standing up to Trudeau, be they #DaughtersoftheVote2019, or be they young workers

We aren’t just the future; we’re the present.

A stunning demonstration of young women speaking truth to power as #DaughtersOfTheVote question @JustinTrudeau (the #Wetsuweten were raised) & demonstrated their displeasure with his decision to remove @Puglaas & @janephilpott from his Liberal caucus. Strong. #cdnpoli pic.twitter.com/hYH50Hx7Px

Dozens of young women here for Daughters of the Vote turn their backs as Trudeau speaks -in solidarity with Ms Wilson-Raybould and Ms Philpott pic.twitter.com/aAhdlDHrcS

#DaughtersoftheVote2019 PM Trudeau addresses DOTV Assembly as several young women turn their backs to him. He speaks about the need to listen to each other to understand POV. Nothing black and white in situations like JWR pic.twitter.com/XCoiDPN3Bu

Addressing caucus expulsions during his speech to #DaughtersoftheVote, PM Trudeau says there’ll always be different perspectives we must listen to but “diversity only works if there is trust & within in a team—when that trust gets broken—we have to figure out how to move forward” pic.twitter.com/usipLYFnDy

He went on to discuss the decision to oust Wilson-Raybould and Philpott from caucus, stating that trust had been broken.

“I know nobody in here wants to have to pick who to believe between Jody-Wilson Raybould and Chrystia Freeland. Nobody wants to know that one person has to be right between Jane Philpott or Maryam Monsef. There are always going to be a range of perspectives that we need to listen to. But ultimately diversity … only works if there is trust. And within a team, when that trust gets broken we have to figure out a way to move forward.”

Wilson-Raybould and Jane Philpott both announced they were resigning from Justin Trudeau’s cabinet in February and March, respectively.

Their resignations were regarding the SNC-Lavalin case and whether Wilson-Raybould –the former attorney general — was pressured to drop a criminal prosecution against the multi-billion dollar Quebec engineering firm.

An investigation into the matter was launched in February after Canada’s Conflict of Interest and Ethics Commissioner, Mario Dion, agreed to the investigation request from the federal NDP.

Last week, Wilson-Raybould released a secret recording of a conversation she had with Michael Wernick, the former Clerk of the Privy Council of Canada. She said the recording further backed her claims that she had faced pressure from top officials and Trudeau regarding the SNC-Lavalin case.

The now Independent MPs spoke to reporters today and responded to their expulsion.

“We’ve been through obviously some very difficult weeks in the past and speaking for myself I can say that the decisions that I have made, I have made on the basis of what I believe is the best for Canadians to stand up for the truth and to stand up for the independence of the justice system,” said Philpott.

Reflecting on her expulsion from Liberal caucus, Jane Philpott tells reporters “you have to be able to hold your head high and look at yourself in the mirror at the end of the day and say that the choices that you made were the best ones under the circumstances.” #cdnpoli pic.twitter.com/X6PSeRv2Eu

“First of all trust is a two-way street… I think it is… it’s unconscionable to tread over the independence of the prosecutor. It is unconscionable not to uphold the rule of law and I have always maintained that stance. I think it is very alarming that people are focusing on the actual recording of a tape as opposed to the contents of the tape,” said Wilson-Raybould.

“The contents of the tape in my view and in the view of many people who have reached out speak for itself…I recorded that tape. There is nothing illegal about it and I said that in any other circumstance it would be inappropriate. I was protecting myself and I knew that something very dangerous and wrong was going to happen and that my job was at risk.”