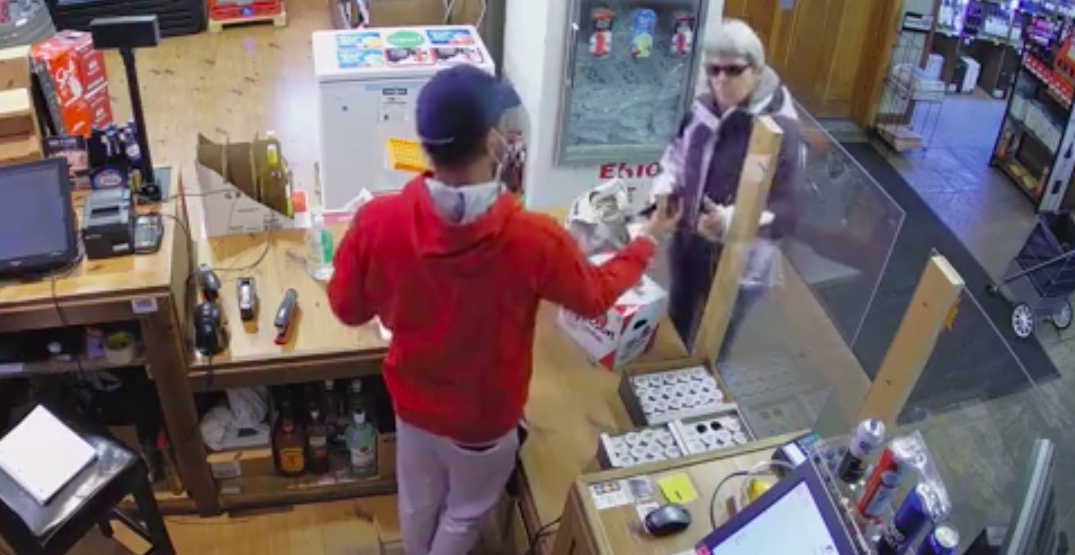 Staff at a liquor store in BC’s Okanagan are reaching out to the public to help identify a woman who allegedly refused to wear a mask and spit on one of their staff members when confronted about it.

In a social media post, the Penticton-located Skaha Lake Liquor Store said the woman allegedly became irate with the employee after she was refused service because she did not have a mask.

However, the incident didn’t stop there, as the woman reportedly also hurled racial insults at the employee and spit “several times on him.”

After using the employee’s phone to make her call, the woman can be seen in the video dropping it on the floor, reportedly causing damage to the phone.

A time stamp on the security footage shows that the incident happened at 1:41 pm on November 21.

The new measures came into effect on November 20 at midnight and continue until at least December 7.

“It’s extremely troubling an employee who was only following the Provincial health orders, was subject to an assault of this nature,”  said Penticton RCMP Sgt. Jason Bayda in a statement. “Spitting at someone is a concern anytime, let alone in the midst of a pandemic.”

Bayda said the woman who was wearing a black and pink coloured jacket is described as an  approximately 60-years-old Caucasian with grey hair.

He added that “although police are in receipt of CCTV images of the woman, they would like to first provide her an opportunity to come forward and speak to investigators about the matter.”

As such, Penticton RCMP are asking the woman or anyone else who may have information into this matter to call them at 250-492-4300.