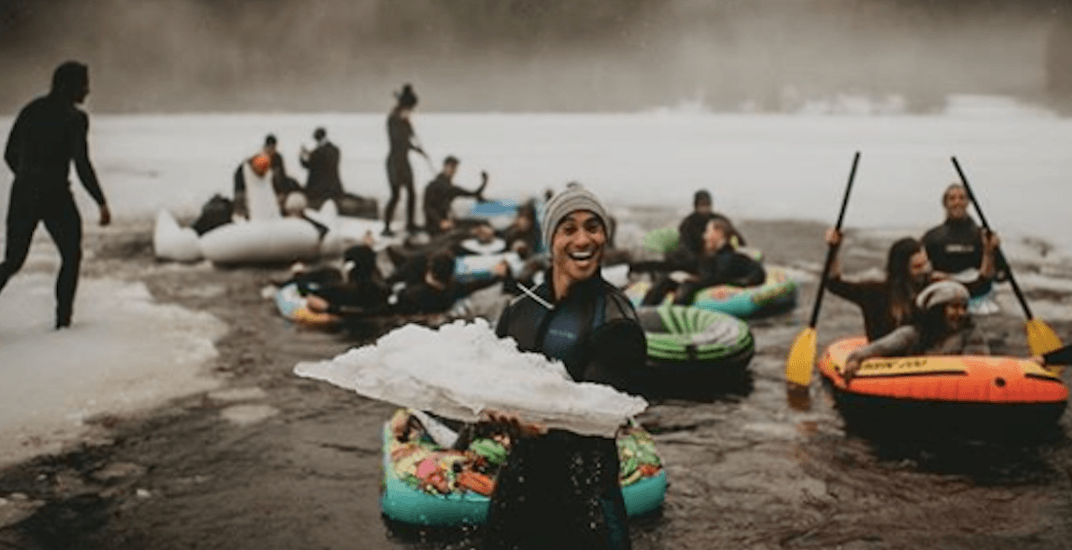 Winters in Canada are known to be grey, dark, and dreary.

But that didn’t stop a group of people from getting into summer mode at a BC lake this past weekend.

The group, which calls itself Chasing Sunrise, decided it was the perfect time for summer to start – if only in their minds.

“Winters here can be long, dark, and rainy. They wear on you and it can be so easy to just succumb to them and stay inside. But that’s not what we are about,” said Chasing Sunrise’s co-founder Julian DeSchutter. “These are the kind of Sundays we live for.”

DeSchutter told Daily Hive that they decided to make the most of it, grabbed a bunch of (really thick) wetsuits, and found a semi-frozen lake north of Squamish.

And that was all the convincing people needed; flotation devices in hand, the group made their way to Brohm Lake on the Sea-to-Sky highway.

“In an instant, it felt like we were transported out of the city and into a whole different world, right in our own back yard,” said DeSchutter.

Over 40 Vancouverites joined Chasing Sunrise to bring back those summer vibes.
⠀⠀⠀
“To us, this is what it’s all about,” he said. “We could have stayed home saying it was too cold and no one would have batted an eye. But we didn’t because getting out there matters to us.”

Chasing Sunrise is a group known for its adventures, and with it, comes a lot of planning for safety. Much like all their excursions, they researched weather conditions, ice safety, and were fully equipped with emergency gear for a safe day trip — which was had by all.

Those who took part in the event shared their shots on social media… and it really does bring back those floatie vibes.