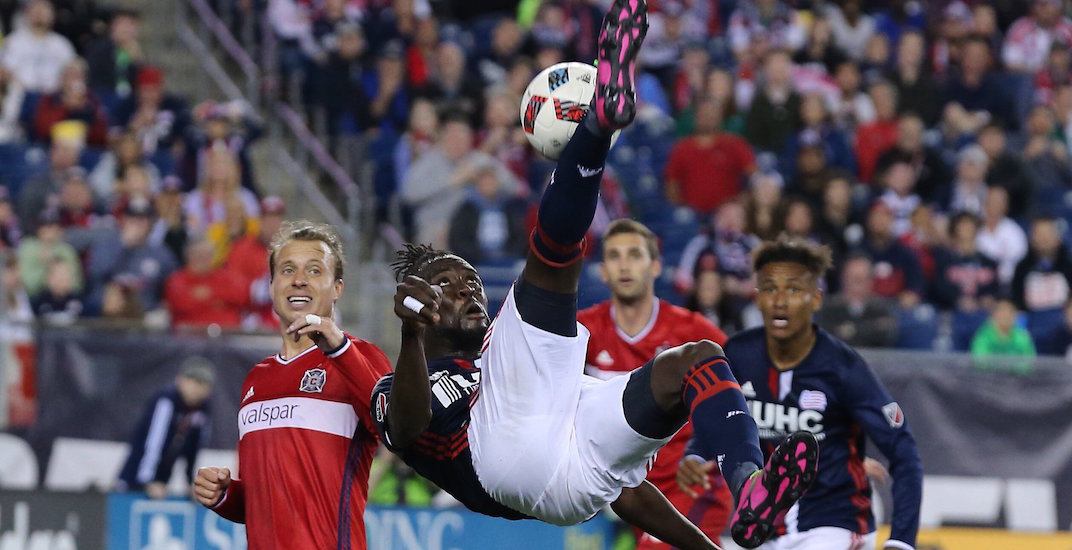 Kei Kamara, come on down.

The Vancouver Whitecaps have a new striker in the fold, acquiring the veteran MLS player in a trade with the New England Revolution. New England will receive Vancouver’s 2019 natural first round SuperDraft pick and a conditional 2020 second round selection as part of the deal.

Whitecaps FC always seem to be in search of goals.

While they finished mid-pack in the league in goals in 2017, they were shut down in both legs in their playoff matchup against Seattle. They’re hoping Kamara, a 6-foot-3 forward, can add another dimension to their attack.

The 33-year-old is a proven MLS goal scorer, ranking 10th all-time with 98 career regular season goals with Columbus, San Jose, Houston, Kansas City, and New England. A native of Sierra Leone, he has American citizenship and counts as a domestic player.

Kamara, who was heavily rumoured to be coming to Vancouver last year, will occupy a Designated Player roster spot and is under contract through 2018.

“Kei is a player that brings goals and experience to the table,” said head coach Carl Robinson. “He’s a big body and he thrives off crosses. Most importantly, he’s a good character and he’s driven to win. We firmly believe that Kei can help lead this team into exciting times next year.”

A two-time MLS All-Star, Kamara was a finalist for the 2015 MVP award. He led the league in goals, including playoffs, helping his team to an MLS Cup Finals appearance.

“I’m really excited to come to Vancouver,” said Kamara. “I’ve been following the club, and I know that they have a very competitive team that suits the way I play. I want to put pressure on myself to continue to score goals. Most importantly, I want to bring success to the Southsiders, Curva Collective, Rain City Brigade, and all the supporters and fans of this club.”

We would like to welcome @keikamara to the @WhitecapsFC. Members of our supporters group chatted with him back in 2016 and had a feeling he wanted to be in Vancouver. Welcome Kei!! #VWFC #WhitecapsFC pic.twitter.com/TbY6HgZWnr

Kamara is the second striker the Whitecaps have acquired in the last 10 days, joining 23-year-old Anthony Blondell, who is making the move from Venezuela.