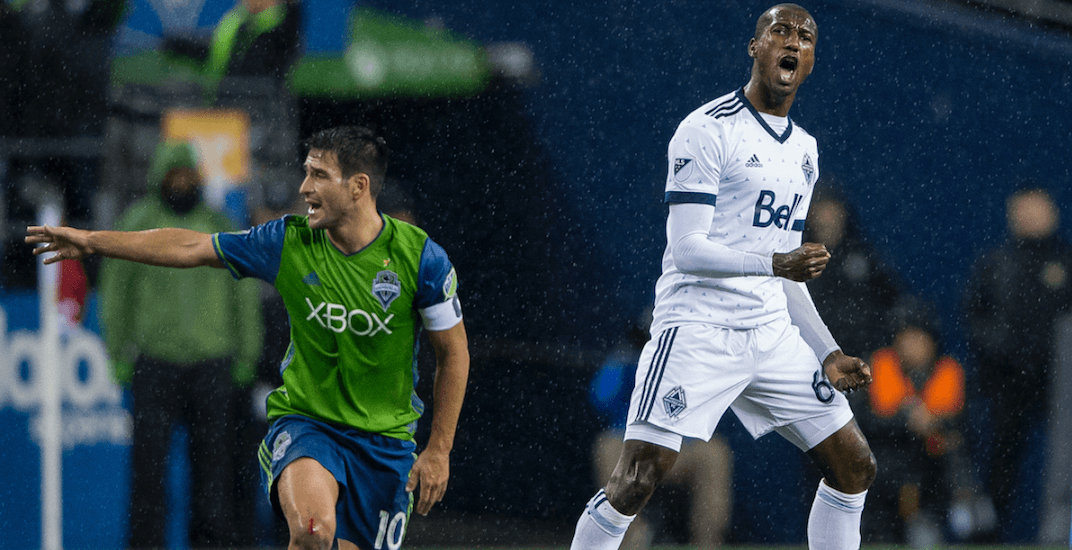 The Vancouver Whitecaps fell by a score of 2-0 in Seattle (2-0 also in aggregate) and therefore have officially been eliminated from the MLS Playoffs, ending their 2017 season in the process.

It had to be that guy

To make matters worse, both goals were scored by one of the Whitecaps archnemesis and MLS super villain, Clint Dempsey. Yes, the man nicknamed “The Deuce,” the same guy who refers to his scoring prowess as “banging Gs” (yeah, that level of douchebaggery) was the one who sealed the ‘Caps’ fate.

But, you see, even in all his faults, it is hard not to admit that Dempsey is a big time player. Dempsey has competed and performed on some of the biggest stages in the world of soccer, including World Cups and the Premier League.

So, yes, Dempsey is a big time player and when his team needed him the most, he stepped up into the spotlight and banged two Gs that earned his team a ticket to the Western Conference Final.

It took a combination of a mistake, a bit of luck and strike of brilliance to finally break down the Whitecaps armor.

Clutch Clint has your Sounders leading 1-0 over the ‘Caps with 5 minutes + stoppage time. pic.twitter.com/y1C3sVKJ8T

The second one was a clincher with minutes left in the clock. It was the dagger that ensure the Blue and White’s death.

A delicious cross from Rodríguez finds Dempsey waiting at the back post to smash it home.

So, while Seattle’s big man delivered when it mattered, the same cannot be said about the ‘big-time’ Whitecaps players.

The ghost of Reyna’s past.

A big reason why the Whitecaps were able to lead the Western Conference in the latter part of the regular season was the tremendous run of form that Yordy Reyna was enjoying.

However, after returning from playing with his national team in the last round of World Cup Qualification matches, Reyna disappeared from the field. It was as if he left his magic somewhere in South America.

Vancouver’s best player in the second half of the season was nowhere to be found when his team needed him the most.

Reyna looked the part during the season, but certainly not tonight. Those types of players cost big money. Will Whitecaps spend in 2018?

Blaming Reyna for the Whitecaps’ demise would be an exercise in laziness. The reality is that the team as a whole did not do enough to deserve a spot in the next round of the playoffs. Registering one shot on goal in over 180 minutes of football is just not good enough.

The Whitecaps displayed the same defensive solidity with the same brief lapses in concentration that were a staple in 2017. The difference is that at this stage of the season, playing against the MLS Cup defending champions with high caliber players, even the most minuscule of mistakes are punished.

In a couple of years, when one looks back at the 2017 season, I think it would be fair to conclude that it was a positive year for Carl Robinson and his team. Who would have believed that Vancouver would lead the Western Conference late in the season?

This team surpassed the expectations that most of us had in mind back in March.

This means that the strong foundation is there. Changes are needed to improve and take this team to the next level, yes. However, blowing this thing up and starting from scratch would be a fool’s errand.

Before the Whitecaps try to find new players, they need to find their wallet first. Fans spend their💲, time for the ownership to do it too.

Trying to fix this team tonight would be a waste of time. Let’s calm down, let the dust settle, and start thinking about next year in a couple of weeks once emotions are not running so high.

By the way, there are 119 days until next March, so we have a lot of time to have these conversations.