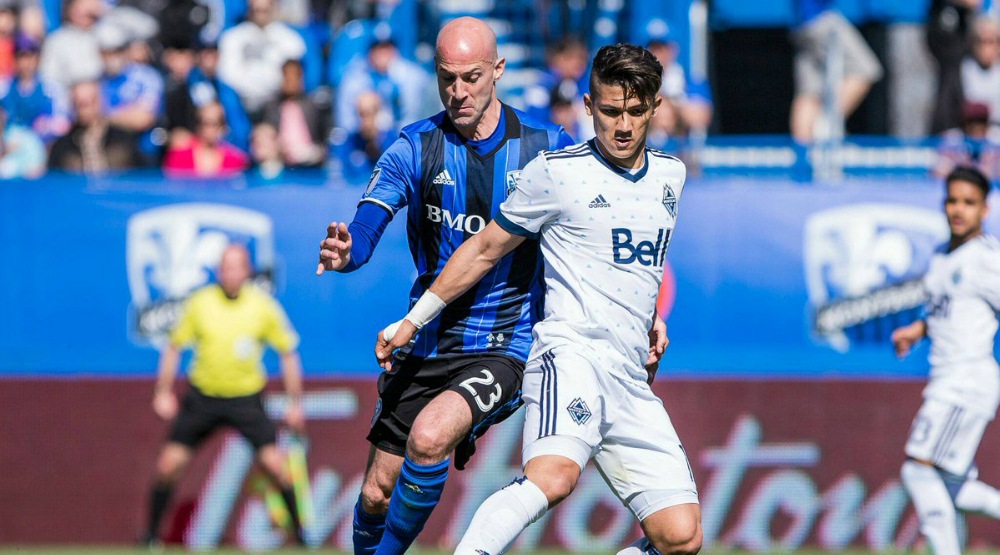 The Vancouver Whitecaps continued their four-match road trip with a rare Saturday afternoon match facing Canadian rivals Montreal Impact. The Blue and White made an impact in Montreal, coming from behind in a 2-1 win from goals by Andrew Jacobson and Cristian Techera.

Bouncing back from a slow start

The Whitecaps conceded the first goal of the match early and quickly found themselves behind on the scoreboard at the ninth minute due to a long strike from Donadel that perforated David Ousted’s goal.

After conceding, the Blue and White started to play better.

They were able to keep possession of the ball, their distribution improved, and they started to exploit the wide areas of the pitch. They began to create chances by cutting inside and bombing service into the box via Christian Bolanos and Cristian Techera.

The Whitecaps’ improved play earned its reward at the 28th minute when Andrew Jacobson brought his team level after slotting a beautiful volley into the top corner of the Montreal goal. It was a top drawer finish from a player who has knack for scoring infrequently, but at key moments for his team.

As the first half progressed, the play levelled and a battle in midfield ensued. Both teams started to cancel each other out and clear-cut goal scoring chances started to come more far and in between for both sides.

It was not until 79th minute when back-in-form Cristian Techera broke the deadlock and delivered the Whitecaps their first three points on the road this season when he calmly finished a counterattack after brushing off a sprawling Laurent Ciman and slotting the ball home.

Carl Robinson deployed a starting formation that deviated from his preferred, almost dogmatic 4-2-3-1. The Welsh Tactician sent out a midfield comprised of a Matias Laba, Andrew Jacobson, and Tony Tchani in the middle with Christian Bolanos and Cristian Techera on the wings.

This group of players allowed the Whitecaps to have a tactical system that was flexible and fluid as the match progressed – morphing according to the needs of the play. The theoretical 4-1-4-1 became a 4-5-1 when defending or a 4-3-3 when in offensive transition.

Gotta give credit to Robbo for sticking to his guns. Played very well last week in the 4-1-4-1 and today was no different. #VWFC #MTLvVAN

This sophisticated tactical fluidity only spoke to the maturation of Robinson as a head coach. His ability to prepare each match and adjust his game plan accordingly is something to look forward in years to come. Sure, the implementation on the pitch may come with some growing pains but this has to be seen as a positive for the club.

The Whitecaps finally have a true goal scorer in their ranks. Coming into the match, Colombian Designated Player Fredy Montero had scored four goals in his last four games.

If this team wants to have a chance to make the MLS playoffs they need a go-to player that can be relied upon when goals needs to be scored.

Techera with the shifty goal. We love “The Bug”!! #VWFC #WhitecapsFC pic.twitter.com/4lzBzJNWa7

It is also true, however that in order to ensure success, this team needs a solid support system around the main goalscorer to pick up the goal scoring slack.

That strength was in full display on against Montreal. While Montero didn’t even have a sniff at goal, Vancouver was able put together a road win with goals from midfielders Andrew Jacobson and Cristian Techera.

The road win is a crucial result for the Whitecaps for a few reasons.

First of all, they collected their first road win. The victory over Montreal came in the middle of a difficult stretch in the schedule as the Blue and White will be away from BC Place for four straight matches.

Secondly, the win also propels the Whitecaps from the depths of the Western Conference to a position above the red playoff line for the first time in 2017. Albeit, some teams may still jump them by time the weekend is over but the ‘Caps are right back in the thick of it.

Finally, the win also came after the Whitecaps conceded first. This is the second come-from-behind win by Carl Robinson’s squad out of three total wins in the season. This team has mental fortitude and resilience in the face of adversity.

The Blue and White will resume their road trip next Satuday in Commerce City, Colorado as they pay a visit to the lowly Colorado Rapids. Can the ‘Caps thread two road wins in a row? It seems that this is a perfect opportunity.