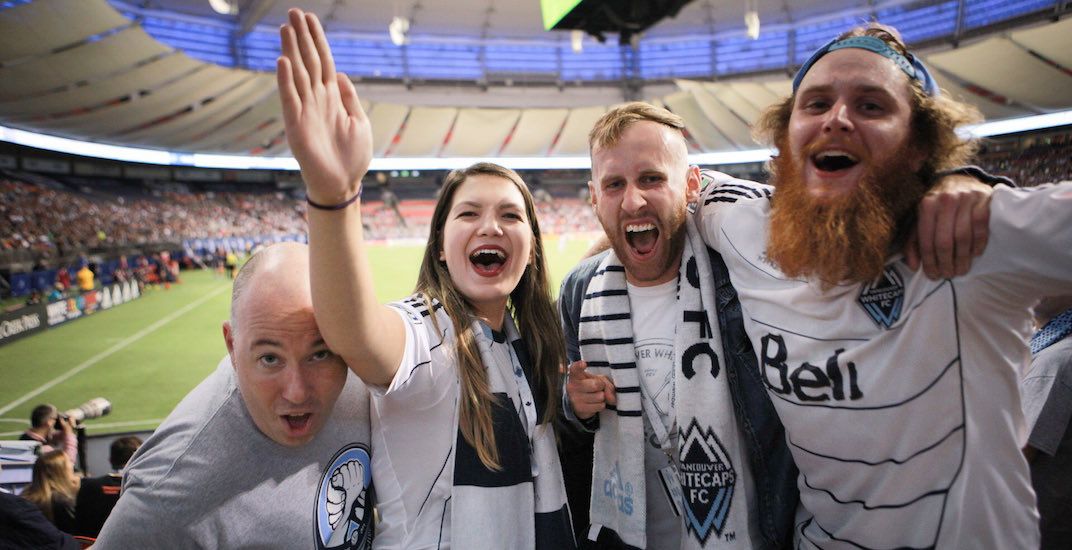 There will be a day when Vancouver Whitecaps fans become bored with their playmakers, secondary wingers and depth strikers showing up to boss around sad-sack teams.

There will also be a day when being first in the Western Conference will be the dull norm, not a celebratory achievement.

In both cases, it was not this day.

The Whitecaps reeled off another win on Wednesday during their impressive homestand, blanking the visiting Minnesota United to the tune of 3-0 to stake their claim to top spot in the brutal dogfight that is Major League Soccer’s wild west.

Technically, the Whitecaps are level with the Portland Timbers on points. Wins are the first tiebreaker, though, and the ‘Caps do have one more (13 to 12) thanks to tonight’s result. The goal that officially gave the Whitecaps the pole position came from – who else? – probably-not-a-secret-any-longer midfield spark plug Yordy Reyna:

It’s very enticing to get lost in a haze of “what if?” when you think back to all that time Reyna spent injured to start the year. Could we have seen more solid work like this? Would first place have been reached months earlier?

Tough to say. What is for sure is that, as of right now, the Vancouver Whitecaps are in first place in the Western Conference – and as I said earlier, this is not the day where we calmly nod our heads in confirmation. This is a day where we freak the [expletive] out.

Marcel de Jong has made his case

At the risk of incurring a sizable amount of wrath from the Jordan Harvey supporters out there, it might be time to amend that hashtag to #HarveyNotAllTheTime.

Yes, the fullback has proven he is an able and solid part of any MLS roster with a plethora of solid performances since he first arrived in a mid-season trade way back during the inaugural 2011 season.

When was the last time you saw him do this, though?

That is a cross from just past the midfield stripe to the edge of the penalty area, smack in the middle of the pitch, right onto the boot of Reyna – who, it must be said, makes a silky smooth first touch to bring that ball under control.

If your jaw is still on the floor, I’ll pause while you collect it.

Is he perfect? No – even my raging bias towards CanMNT players can’t obscure the faults in De Jong’s game, such as his propensity to be a little too attack-minded at times.

We also can’t overlook the part where Minnesota are bad. Like, really, really bad. Maybe not Colorado Rapids bad, but the Loons aren’t exactly scaring anyone these days. It’s not difficult to look good against cellar-dwellers.

That said, De Jong plays the game with a style and confidence unlike the vast majority of his teammates. How many current Whitecaps can claim a decade of credible European experience?

Plus, he can play defensive midfield in a pinch, so there you go – a man after head coach Carl Robinson’s own heart.

My point is, De Jong has to be considered a starter as the playoffs approach. During this stretch of games, absolutely, rotate him with Harvey to keep everyone fresh.

E-Money in the bank

So how about that goal-scoring dynamo on everyone’s lips, er… uh, Erik Hurtado?

E-Money lives! It must be the hair. Reyna’s getting it done as Sideshow Bob, so I guess that makes Hurtado, what, Cecil? Sure, let’s go with that, why not.

For all the hate he receives – much of it unjustified – Hurtado has rarely shown anything less than a workmanlike performance when called upon. Certainly, his finishing may not be as clinical as the team needs – nine goals in his 87-game MLS career is a solid point in that argument’s favour.

What Hurtado has consistently done, though, is the dirty work. He crashes, he bangs, he challenges defenders, he forces them to take him seriously and makes them expend valuable energy chasing him down.

It’s a skill that is criminally unrated by some corners of the fandom, to their detriment. To these people, it’s goals, goals, and more goals or get out. I fully admit Hurtado is likely never going to satisfy on that point and it unquestionably limits his value.

However, Hurtado does have value as a target forward – someone whose job is not so much to score but to enable others around him to find the back of the net. Occasionally, those players are rewarded with their due.

Tonight, E-Money cashed in. Good for him.

But will it last?

Ah yes, the eternal question: are the Vancouver Whitecaps for real?

At this stage of the season, you are what your record says you are. Right now, that record says the ‘Caps are 13W-9L-5D, which seems pretty darn real to me.

“But, but, but possession,” shouts the cranky fan who’s still stuck in 1960s England where possession stats meant anything.

(Seriously, stop using possession as shorthand for “good/bad team”. Possession is a false metric in the modern game and is practically worthless as a benchmark. But I digress.)

So what? Despite having the absolute worst possession average in the league and losing the possession battle tonight (40.8%), the ‘Caps still won like they’ve won twelve times before. They have a style and it clearly works.

“But, but, but we don’t have big money superstars to carry us,” whines the envious fan who can never be happy with his team so long as other teams are doing shinier, prettier things off in the distance.

Ah, so Fredy “11 Goals in 27 Games” Montero just fell out of the sky and into our starting eleven, then? Right.

Look, money does help, no question. It still has to be smart money, though. Go look at all the pre-Michael Bradley Toronto FC teams and how much money they flushed down the drain year after year trying to buy a winning squad.

Heck, go count all the trophies the New York Red Bulls won while they had the likes of Thierry Henry, Tim Cahill and Juan Pablo Angel on the books. Note how you don’t need more than one hand. Or finger.

Then go look at how much the Portland Timbers paid for Diego Valeri and try and tell me that you have to drop a metric whack-ton of cash just to be competitive in this league.

I know hating the home team is something of a civic tradition for the Vancouver sports market. Well, it’s still a stupid tradition.

The Whitecaps are for real. Regardless of whether or not this means a trip to MLS Cup, enjoy it while it lasts.

Hey, is that Kekuta Manneh…?

Columbus have arrived early for Saturday's game. Great to see Scooter at match supporting his old team & cheering on his friend Erik's goal

For those that have asked. This isn't #FakeNews. I was chatting with him for most of half time! 😂 Erik told him he'd score for him. https://t.co/snCnKm0oba

Hopefully Manneh won’t be cheering too hard on Saturday when the Crew and ‘Caps mark the end of Vancouver’s homestand.