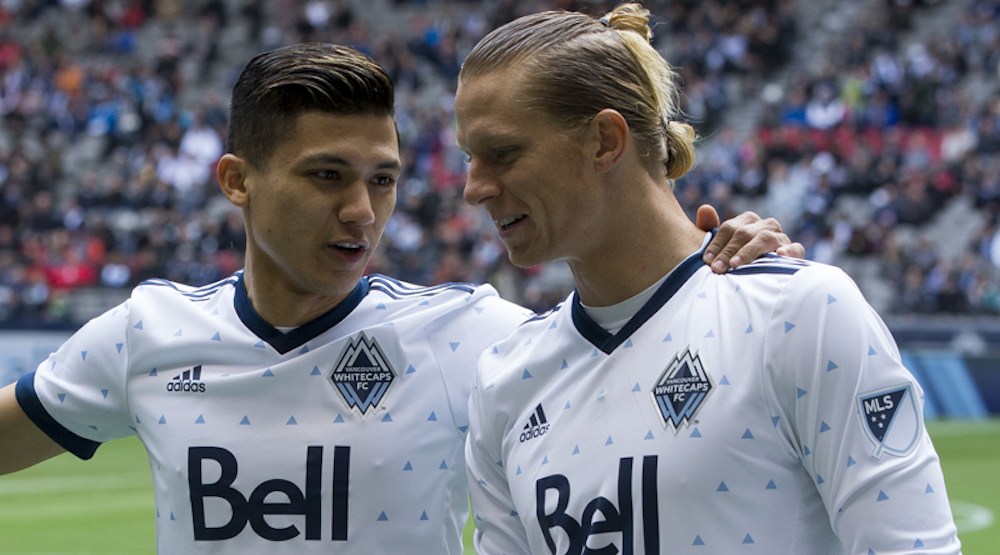 It was all square on Father’s Day Eve as the Vancouver Whitecaps treated a crowd of 22,120 at BC Place to a 1-1 draw with visiting FC Dallas on Saturday.

After Dallas striker Maximiliano Urruti opened the scoring with a surging run off a Matias Laba turnover and a seeing-eye shot through Andrew Jacobson’s legs, Cristian Techera salvaged a draw for the home side with a scintillating free kick that is becoming something of a calling card for El Bicho.

Y’know, I think this Cristian Techera guy might be good at soccer.

The draw leaves Vancouver in fifth place, four points back of 3rd-place Dallas in the MLS Western Conference.

The dad who has it all

Right off the top, a big round of applause for Whitecaps winger/forward Brek Shea, who managed to both be with his wife for the birth of their son and make it back to Vancouver in time to be a part of the starting lineup.

“He literally texted me an hour before my meeting and said ‘I’m a new dad, I’ll be there in half-an-hour. Make sure my name’s on the team sheet.’ So that shows character. He wants to play for this club. We want him to play for this club, and I think if he plays like that, we’ve got a super player.”

Shea put in an excellent shift, too, eventually being subbed out for recent Whitecaps signing and injury recoveree Bernie Ibini, but not before leaving his mark on the game with this:

Two-touch volleyed cross after an exhausting day? No problem. You can be pretty sure the crowd would’ve gone bonkers had the ball floated over goalkeeper Jesse Gonzalez or fallen to the waiting feet of Fredy Montero for a tap-in.

I want to see Russell Teibert do more of this

The point is, Teibert’s conversion from offensive to defensive mystified me from the get-go. Versatility is all well and good, sure. At some point, though, a player needs to be put in a position of strength and allowed to flourish, not shoehorned into a role that kinda sorta fits the skill set on display.

I want to see more of Teibert running at opposition defences, taking down long balls with a single, silky touch and getting into dangerous areas. Central, on the wing, doesn’t matter – this is where Teibert was always meant to be and it’s where he should be now.

Teibert wasn’t afforded many chances to roam into the attack tonight, with most of the opportunities going to Tchani.

Check the scoreline and see how well that went.

Strength. Speed. Composure. Some fancy footwork. Probably a bit of turf burn after that tumble. Truly, the kid is a defender after head coach Robinson’s heart.

The Tony Tchani honeymoon is over

All right, so, here’s the part where I make an uncomfortable acknowledgement considering my past stance on the topic.

Tony Tchani might not be a great pickup for the ‘Caps after all.

Been trying to give benefit of doubt all half but Tchani's lack of vision, instinct & touch has been rather frustrating & disapointing #VWFC

The key word there is “might”. I’m not outright declaring Tchani a dud, just that today’s game was part of an ongoing body of evidence that raises more than a few questions.

Questions like, “Why is the offence continually being channeled through Tchani when his passing is inaccurate and slow?”

Questions like, “Couldn’t Tchani be the one holding back and sweeping the midfield with Matias Laba instead of Russell Teibert?”

Questions like, “It couldn’t hurt to have Tchani play a match with Whitecaps FC 2 and recall midfielder Ben McKendry in his place just to send a message, could it?”

In short, I don’t want to see Tchani as a de facto playmaker. Please note how the Whitecaps’ attack changed dramatically when Tchani passed off his duties to Alphonso Davies later in the game to see what I’m talking about.

Davies takes on three defenders, beats them all, only stops moving when the third defender throws the body block. Later, he’ll probably go home and finish his math homework. No big deal.