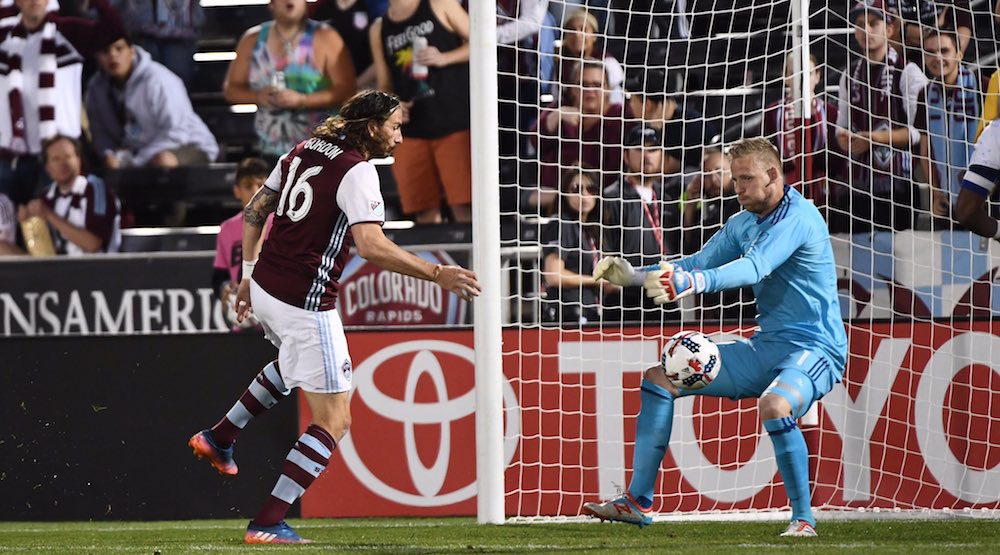 It wasn’t pretty, but the Whitecaps took care of business on Friday, defeating the Colorado Rapids on the road thanks to late goal from Brek Shea.

The victory is the Whitecaps’ second in a row, and the first time they’ve won back-to-back games in almost a year.

If it ain’t broke don’t fix it?

For the third week in a row Whitecaps manager Carl Robinson went with the same starting XI, and with two wins in three matches it appears the Welsh tactician is onto something.

There hasn’t been much continuity in the Whitecaps’ starting lineup over the years. In fact, Robinson’s decision to stick with the same group of players three weeks running has happened only one other time since 2011.

The Whitecaps have been in #MLS since 2011. Tonight is only the 2nd time a manager has started the same XI three games in a row. Incredible.

With goalkeeper David Ousted at the back and striker Fredy Montero up top, Robinson has a has a solid group of veteran players at his fingertips.

While Montero was held scoreless for the second straight game, Ousted was up to his usual heroics making a massive play to prevent a Jordan Harvey scoring an own goal in the second half.

The match also saw the return of forward Brek Shea, who has been out of the lineup since injuring his knee in a CONCACAF Champions League match several weeks ago.

Shea, who replaced Cristian Techera late in the match, was set up by fellow substitute Nicolás Mezquida to score the only goal of the game.

With a shrinking injury list and goals coming from all over the pitch, the Whitecaps are starting to fire on all cylinders and win matches. It’s nice to see.

Victories, much like goals, don’t need to be pretty because points are more important than aesthetics.

That being said, there wasn’t much action to keep the people interested, and fans and pundits alike found plenty of reasons to complain at the fare being offered up on the pitch.

It's repulsive, yet I cannot look away. #COLvVAN

While the play Whitecaps and Rapids was not the most stimulating affair, the game did feature the rare occurrence of a referee substitution.

Actually, after pulling a hamstring referee Jorge Gonzalez was forced to leave the game, and was replaced by the fourth official Younes Marrakchi.

A long road trip at any time of the year is a difficult challenge for any team in Major League Soccer.

It’s inevitable that every team across the league faces a trip like this at some point, but the timing couldn’t have been any worse for the Whitecaps, who until recently were still playing in the CONCACAF Champions League.

Additionally, the Whitecaps were faced with the prospect of having to play in difficult places like Portland, Montreal, and Denver where the results have not always gone their way over the years.

Quite an opening for #WhitecapsFC to grab 3 points. Colorado look dreadful

With two wins out of three away matches, the Whitecaps will be pleased with their haul of points on the road so far. They have tough game in front of them though, when they close out their road trip against the Houston Dynamo next weekend.

An army of one

People go to great lengths to support their club, and Whitecaps fans are every inch as passionate as soccer fans that you will find any where else in the world.

The Whitecaps usually enjoy a contingent of supporters at every away match, but this time the following was a little smaller that usual with only long-time fan, Kristjan Aug, making the trip down to Denver.

One #VWFC fan (@krisaug5) in the away section in Colorado. Respect to him for making the long trip for a Friday match #MLSAway #CapsOnTour pic.twitter.com/9knJRWJqt4