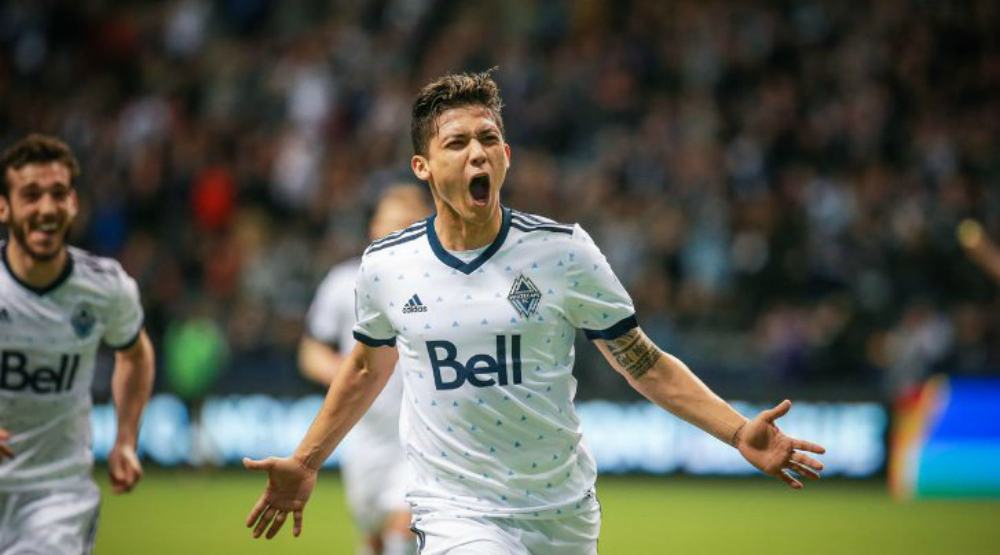 Almost two months into the new MLS season the Vancouver Whitecaps are starting to show signs that they are finally breaking out of the funk that plagued the team for most of last season.

Goals were in very short supply for the Whitecaps in 2016. Pedro Morales finished as the team’s top scorer with only nine goals, as the club struggled to score on a consistent basis all season long.

The Whitecaps have been searching for a pure goal-scoring striker ever since Camilo Sanvezzo spurned the Whitecaps after winning the MLS Golden Boot Award with a 22-goal campaign in 2013.

It's a shame Camilo screwed the Whitecaps over. I felt they were on the verge of something in the next couple years having him.

“Camilo was excellent in his third year [with the Whitecaps], but if you look at his record before that he wasn’t consistent in scoring 20 goals every year,” Whitecaps FC head coach Carl Robinson told Daily Hive, unconvinced that the Brazilian striker would have been able to duplicate his performance.

Robinson tried repeatedly to find a replacement after Camilo’s abrupt defection, but it never quite worked out quite as planned.

Octavio Rivero, Kenny Miller, and to a lesser extent, Darren Mattocks have all been given the chance to lead Vancouver offensively, with less than desirable results.

“In MLS these days you get what you pay for,” explained Robinson. “Giovinco guarantees you 20 goals because he’s earning seven million dollars a year, but when you’re looking at players who are in the one-to-two million dollar range, some work out and some don’t.”

One of the players who falls in this more affordable price range is newcomer Fredy Montero, who recently joined the Whitecaps on a year-long loan deal from Chinese Super League club Tianjin Teda.

Montero is no stranger to MLS having established the reputation as an explosive goal scorer after four impressive seasons with the Seattle Sounders. When he left MLS at the end of 2012 he had scored nearly 50 goals and put his name into the Sounders’ record books as their all-time leading goal scorer.

When Robinson heard through the grapevine that the Colombian striker was eager to return to MLS, bringing him to the Whitecaps became a top priority.

Playing with my friend @mdr7 MAURO ROSALES once again !! 💪🏻👏🏻 pic.twitter.com/EDjjFZC5p6

“When Mauro Rosales, who was an ex-teammate of his in Seattle, asked me if Fredy would interest me I said definitely,” Robinson recalled. “I then spoke to Fredy about what he wanted to do, and then I went all out to try and make that happen.”

The deal to bring Montero to Vancouver was finalized in the middle of February, and Fantastic Fredy helped his new team reach the CONCACAF Champions League semifinal by scoring a spectacular goal in his very first game.

Since that night Montero has continued to score goals on a regular basis. His biggest game so far came two weeks ago when he scored a pair of goals to lead the Whitecaps to a 2-1 win over the Seattle Sounders.

With four goals in eight MLS matches, Montero isn’t leading the league, but Robinson has been pleased with what he’s seen so far.

“We’re dealing with a lot of injuries, so when we get a full complement of our attacking players then hopefully there’ll be more chances,” said Robinson. “The more chances we create for him, the more goals he’ll score because he’s already proven it in the short period of time with us.”

Robinson raises an excellent point that despite an injury riddled attacking corps Montero continues to score goals, and if the trend continues then it could help get the Whitecaps back the playoffs this season.

“I firmly believe that we now have a natural goal scorer,” explained Robinson. “Our job is to create chances for him to allow him to become that 20-goal-a-season striker because if we have that then we’ve got a very good chance of getting into the playoffs.”