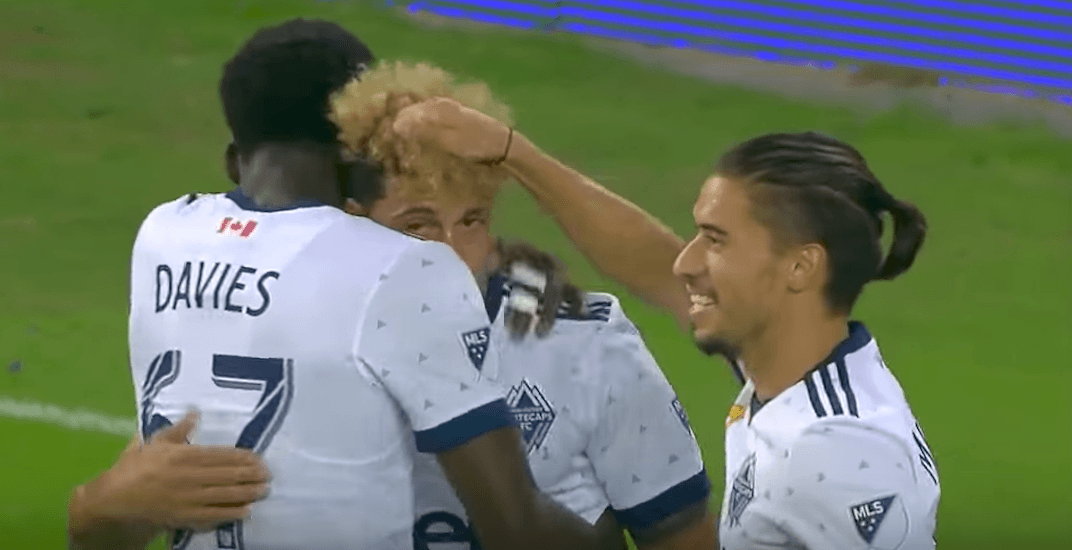 The character and determination of the 2017 Vancouver Whitecaps can no longer be questioned.

Days after suffering a humiliating loss to the Seattle Sounders, the odds looked to be stacked against the Whitecaps as they played in-form Sporting Kansas City at Children’s Mercy Park on Saturday night.

To Vancouver’s credit, they quickly put the Seattle loss behind them to earn their first-ever victory in Kansas City, winning 1-0. The win not only keeps the Whitecaps in first in the West, but also punches their ticket to the playoffs.

Winning, they say, cures everything.

You can forget about ‘winning ugly’, forget missing the playoffs last year, and you can definitely forget the start of the season when the Whitecaps struggled while they played games in both the MLS and CONCACAF Champions League.

The Caps bounced back from the Seattle loss, and hung on by the slimmest of margins to beat a SKC team that plenty of quality scoring chances.

Do the stats really matter?

Although Vancouver won the match, they were outclassed in virtually every offensive statistical category. SKC had more shots, corners, and an impressive 74% possession of the ball.

If you're as obsessed by #VWFC possession stats as I am, they finished with 26.3% v KC. Four intervals of game saw them with less than 13%!

The Caps, on the other hand, fared better on the defensive side of the game. Kansas City pressed Vancouver hard for the majority of the game, but could not find a way to beat goalkeeper Stefan Marinović .

At the end of the day the Whitecaps’ defence bent, but did not break, allowing Erik Hurtado to come up big on a night when there were very few goal scoring chances. Hurtado scored the only goal of the match in the 53rd minute with a clever play.

The mid-season signing of New Zealand international goalkeeper Marinović  took many fans and pundits in Vancouver by surprise.

However, Marinović had made a name for himself earlier this summer when he represented New Zealand at the Confederations Cup, and played very well during the tournament.

David Ousted has been an outstanding goalkeeper since joining the Whitecaps in 2013, but with the Dane recently declining a contract for next year there are questions whether he’ll be playing here next season.

Welcome to Onfield Management @david_ousted_official_ 🙌🏽 thanks for trusting us! We look forward to what comes next!

Marinović made several huge stops against Sporting Kansas City during the game. His biggest stop came early in the opening 15 minutes of the match when he made this world class stop on Diego Rubio:

If Ousted isn’t back next season, Whitecaps fans can take solace in the fact the Carl Robinson seems to have found a very capable goalkeeper to replace him.