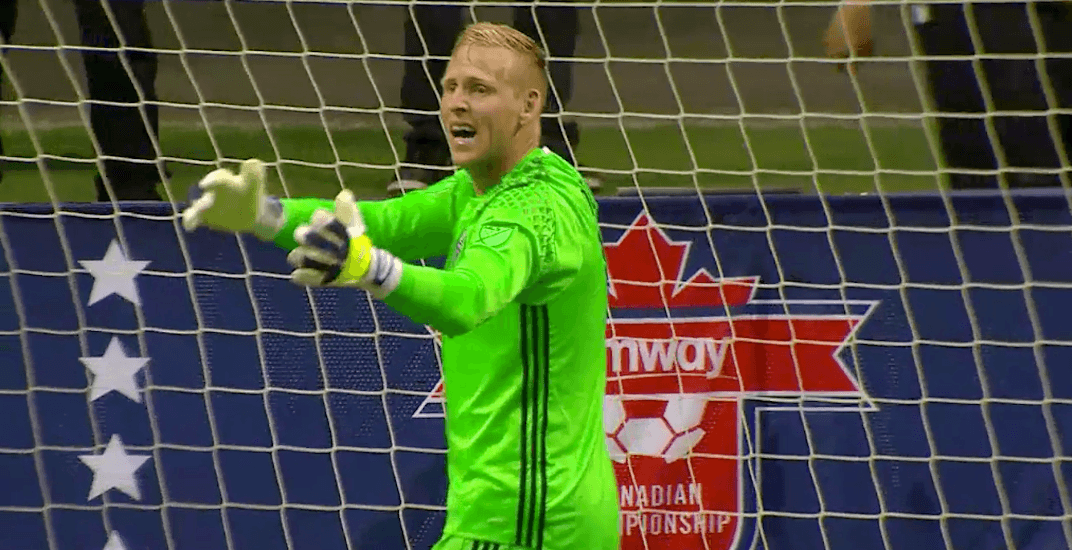 Heartbreak seems to be synonymous with the Vancouver Whitecaps when it comes to the Canadian Championship.

Wednesday night was no different as the Whitecaps scored an own goal on the last play of the game, squandering a chance to take a crucial 2-1 lead back to Toronto for the second leg of the final.

It’s the latest cruel twist of fate that has haunted the Whitecaps in what has become a Voyageurs Cup curse.

Montreal blows it for Vancouver (2009)

The Whitecaps’ first Canadian Championship heartbreak occurred even before they entered MLS.

Heading into the final game of the 2009 Canadian Championship, the Whitecaps would clinch the Voyageurs Cup as long as Montreal didn’t lose by five or more goals.

All looked good to start as the Impact jumped to an early 1-0 lead on a successful penalty.

Unfortunately, from then on, the floodgates opened with TFC striking six goals in 62 minutes for a 6-1 win that gave them the goal differential necessary to capture the Cup.

After a 1-1 draw in the first leg between the Whitecaps and TFC at Empire Field, the series shifted to Toronto where the Whitecaps took a 1-0 lead in sloppy and wet conditions created by a lightning storm.

It proved to be all for naught though as the match was abandoned in the 60th minute with the playing conditions deemed unfit. The match was rescheduled and Vancouver’s lead taken away.

The rematch featured a similar start, as the Whitecaps took a 1-0 lead into the second half. It appeared they even dodged a bullet early in the second half when goalkeeper Joe Cannon fought off a penalty kick to keep the visiting team out in front.

The referees ruled that Cannon left his line prior to the kick and thus gave a second opportunity to Toronto – one that Joao Plata didn’t miss out on.

TFC would add one more goal to win it all.

Carrying a 2-1 aggregate lead into the final 10 minutes of the second leg, the Whitecaps needed to cling onto their slim advantage against Montreal to win their first trophy.

But it was not to be. Vancouver succumbed to a late-game goal as Impact defender Hassoun Camara put away an open header in the 84th minute. Montreal won by virtue of having more away goals.

The Whitecaps were on the right side of the heroics for once in 2014, as Pedro Morales converted on an 84th-minute penalty to tie the aggregate score in the second leg of the semi-final against Toronto FC at BC Place.

All it did was add to the eventual heartbreak though, as TFC won 5-3 on penalties to advance to the finals.

Up 2-1 on aggregate in the dying seconds, Vancouver looked poised to claim their second consecutive Voyageurs Cup win in front of their fans at BC Place.

Deafening excitement transformed into silencing cruelty though, as Will Johnson delivered a gut-wrenching blow with the critical second away goal in the 94th minute. Kendall Waston collided with goalkeeper David Ousted moments before the goal went in.

With the aggregate score level, TFC used their away-goals advantage to pry the Voyageurs Cup from a stunned Whitecaps squad.

A chance to move on

Save for the lone 2015 victory, the Canadian Championship has presented nothing short of a nightmare for the Whitecaps and their fans, with Wednesday’s draw serving as yet another chapter in a long book of heartbreaks.

Making matters worse, Alphonso Davies picked up a (hopefully not serious) injury during the match and Doneil Henry fractured his wrist punching a wall after his own-goal.

#WhitecapsFC’s Doneil Henry has a right wrist fracture, after a post-match punch to a wall. He is sporting a cast. He is still in contention for Portland tomorrow. #MLS #VWFC pic.twitter.com/CYnFmPaapy

Fortunately, the Whitecaps have an opportunity to remedy Wednesday’s debacle, with the decisive second-leg scheduled at BMO Field on Wednesday.

Let’s hope the Voyageurs Cup curse doesn’t conspire against the Whitecaps yet again.