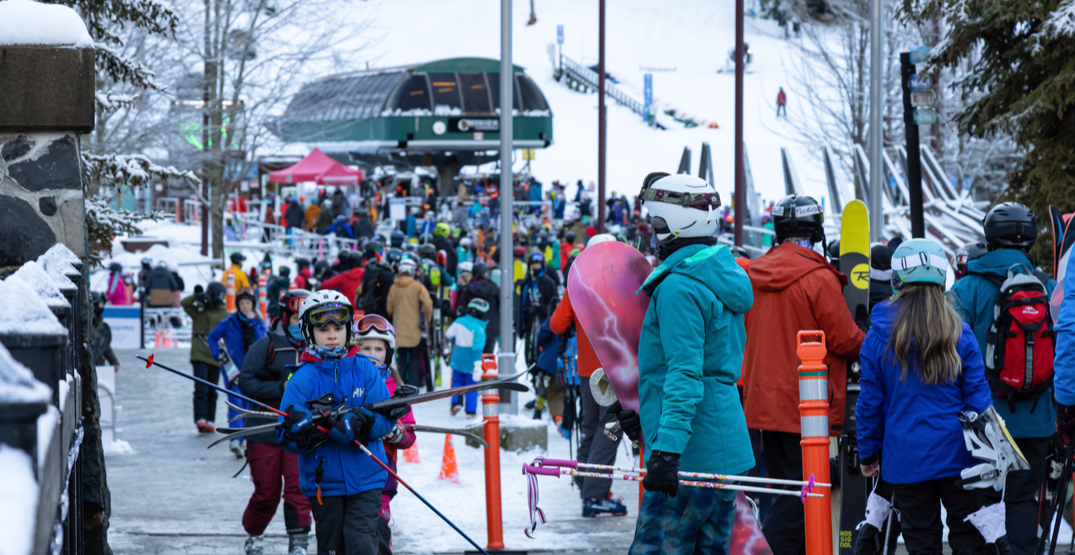 The gondola lineup at Whistler on December 28, 2020 (EB Adventure Photography/Shutterstock)

Written for Daily Hive by Shannon Youngs, a newly versed writer living in the beautiful mountains of Whistler. A longer version of this post was first published on slyblogwriting.wordpress.com, where you can find more life, leisure and lgbtq+ articles

DISCLAIMER- The opinions in this post are regarding situations that occur within the duration of COVID public health orders in British Columbia.

Near the end January, the residents of the Vancouver Coastal Health Region learned that the Resort Municipality of Whistler had reached 288 positive COVID cases. This number beat out 2020s total number of identified cases, which was 271.

Not only did this bring fear into Whistler but it also brought a new set of regulations set by the Minister of Health, Dr. Bonnie Henry. The advisories included “no non-essential travel” and specifically stated that those living in the Vancouver area are to keep to their three local mountains (Cypress, Grouse and Seymour) and that they should not ski in Whistler until the order has been lifted.

It was around Christmas when local employees began noticing that the majority of customers they were serving weren’t only from out of town but weren’t even from the province of BC. This is where the confusion and resentment began.

Currently, there still seems to be a divide between those who follow the rules and those who leave the rules up for interpretation. Regardless of how you view the advisories, it’s clear to see that we’re not “all in this together“.

Let’s go through the 5 reasons why people in Whistler are torn about tourism right now.

This caused confusion with people looking to visit by saying “don’t come unless absolutely essential, but if you really want to…why not extend your stay and get a 2 for 1 at the spa.”

Public Health Officials- “No non-essential travel”…”but if you do go, day trips are best.”

You can’t tell people “ESSENTIAL TRAVEL ONLY” then say “but if you want to go skiing, just make a day trip of it.” It invalidates the urgency and importance of the original message.

Doctors vs BC Hotel Association- In January, an emergency room doctor in Whistler called upon the BC Government to restrict interprovincial travel after seeing an “alarming” number of patients from Ontario and Quebec during the holidays. At the same time the BC Hotel Association was pleading with the Government to NOT restrict travel because they are hanging on by a thread.

Escape From Lockdown- Some residents of Ontario have discovered that they can avoid their government-ordered lockdown and escape to Whistler.

A friend of mine served four men who were visiting Whistler from Ontario and Quebec. While paying their bill they openly stated that they had reunited for a ski trip and that it was refreshing to be free from all of the rules in Ontario.

Some media outlets have stated “most of the people visiting are here for work” and unfortunately that just isn’t what the local employees are seeing and hearing. How are we supposed to take our own province’s rules seriously if visitors from out of province can visit seemingly carefree?

Ontario’s Travel Rules- When you enter/re-enter Ontario it is requested that you self-isolate for 14 days. It seems to be a topic of discussion of why BC cannot put the same rules in place for anyone entering BC from another province.

Travelling To A Hotspot- Simply put: are people just not worried about travelling into a spot that has already surpassed its previous years total number of COVID cases in just one month?

Visitor From The Moon- Most visitors are abiding by the rules (masks, sanitize, social distance and capacity) however, there will always be those who act as though they’ve never heard of COVID. Asking things like “Wow, why is it so dead here?” and “what’s your night life like?”

Employees also have run-ins with those who challenge the validity of COVID store policies. We are all just trying to do our job and protect our little community. When you visit someone’s house, you respect their house rules. We expect the same when you visit our community and our businesses.

Thankful For Business- There are many small businesses who are privately or publicly struggling during these challenging times and we keep hearing visitors say “without us, Whistler wouldn’t survive.”

For those of us who still have jobs, we are thankful. However, it’s frustrating to see people ignoring public health orders which, in the long run, prolongs restrictions and prevents our community from actually thriving.

Catch 22- Some visitors are trying to be thoughtful by bringing their own groceries to reduce any contact with our employees/residents. These people are also being criticized for not supporting local business. That is a hard one to navigate.

Whistler residents are stating “you’re not supposed to be here” while Vancouver residents fire back “Whistler people are in Vancouver too, you can’t have it both ways.” Both arguments are valid but there’s more to it than that

Population Comparison-. When people from Whistler travel to Vancouver, we leave a small community of approximately 11,854 people and go into a city made up of 2,581,000 people. Is it worse going from a small community into a big one or vice versa? Who is more vulnerable? This has caused a lot of debate and resentment.

Uneven Resources- Those residing in Whistler just don’t have the same amount of services that one living in a city does but we try to make the best of what we have. That being said, there are people who must go to the city for physical/mental health reasons. Some people from Vancouver say that they have doctors appointments in Whistler. I’m sure that’s also true although it is confusing why someone would drive two hours there and two hours back for an appointment when there are more resources in the city.

Shopping- Buying simple things like underwear and bras can be a challenge in Whistler, even trying to buy deodorant for less than $6-$8 is tricky.

People from Whistler get more value for their dollar when it comes to buying groceries, clothes and medical supplies in the city. Many visitors from outside of the Whistler community complain about the high prices when they visit for a weekend, let alone what it’s like for those of us who live with those prices 365 days a year.

It’s been said that the majority of COVID carriers in Whistler are people from ages 20-30 who “live, work and socialize” together. Several media reports have alluded to “partying” being the culprit for the rise in cases.

Everyone knows Whistler’s reputation for being a party town. But with our clubs shut down and bars restricted from serving alcohol past 10pm, how is this virus getting around so quickly? The answer to that is our housing.

The majority of us live in households of 5-18 people. COVID moves like wildfire through these houses because let’s say two people test positive for COVID who don’t live together but have both been in contact with their roommates, that is now potentially 26 people who’ve been in contact with someone who has COVID.

If partying is the cause for the spike in cases, why aren’t we hearing about rising cases elsewhere? It was recently reported in Vancouver that a penthouse party was busted with over 70 people in attendance.

Whistler’s housing is not ideal or very safe during a pandemic. With the everlasting housing crisis it’s also not ideal for landlords to ask young adults to pay over $1200/month just to have your own bedroom. Without these workers who are willing to live in these housing situations, Whistler would not exist. These are the people who run our businesses and help to create memorable, positive experiences for those who visit.

Everyone’s tired of having their actions regulated. Whether that be limiting access to family and friends to not feeling as though you can escape your own community for a day without having to explain yourself.

It’s clear to see that we all need to respect these regulations for the time being. If you’ve already been doing so then I commend you, that it is not an easy feat. A short term sacrifice can lead to long term freedom. By ignoring the rules and getting that temporary freedom, we set ourselves up for prolonged restriction. We all need to do our part if we want to have any hope of coming together later.