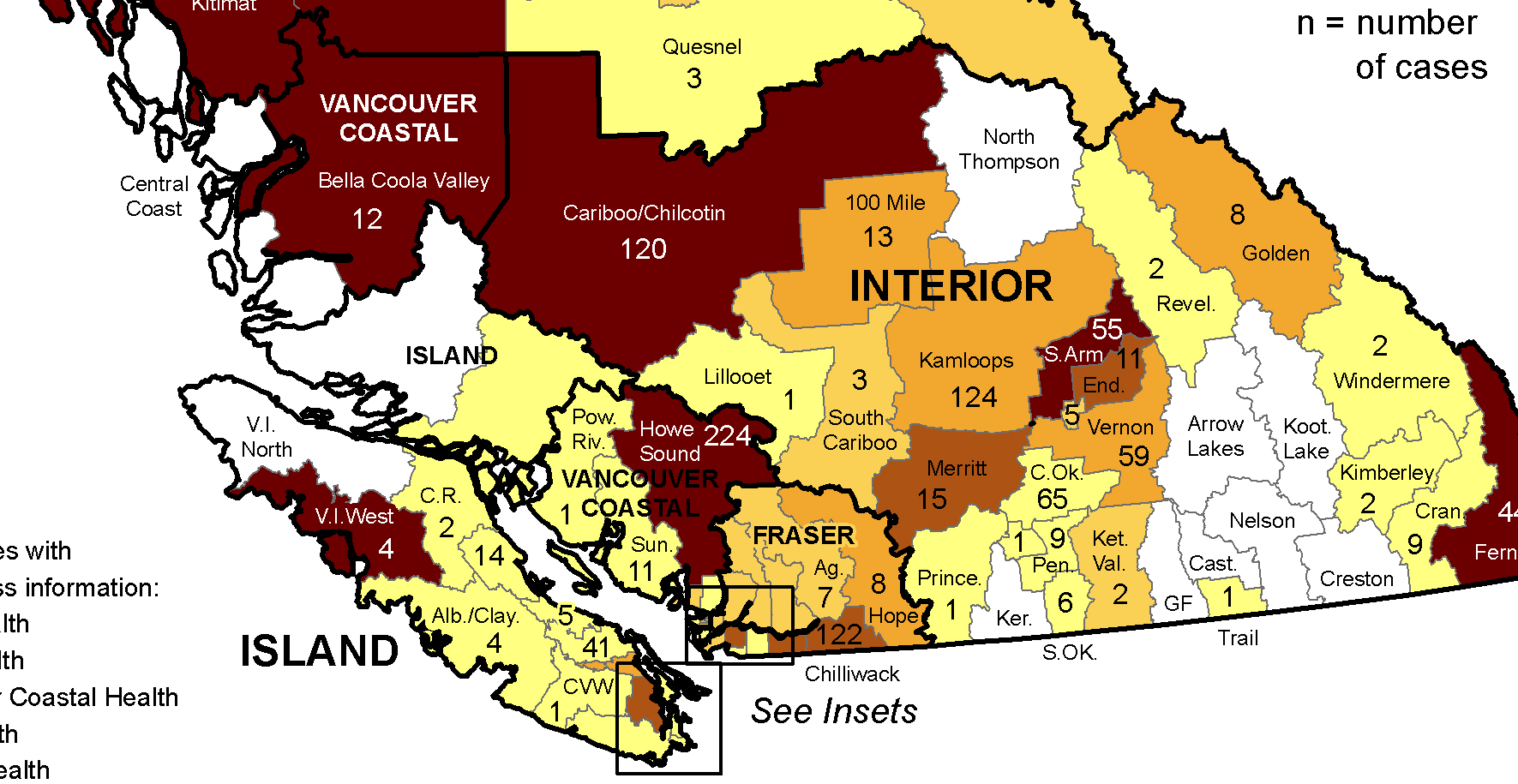 New data from the BC Centre for Disease Control shows how Whistler became the province’s latest COVID-19 hotspot with a massive jump in new infections.

In a heat map plotting new infections per capita between January 17 and 23, the Howe Sound region reports 224 new cases per 100,000 people. The area around the popular ski resort is coloured a deep burgundy.

“The majority of these cases involve young people in their 20s and 30s who live, work, and socialize together,” it said in a news release Thursday afternoon.

So far none of the young people have needed hospital care or died.

Whistler Mayor Jack Compton spoke to Daily Hive about the situation Wednesday, sharing his concern about the “sharp increase” in cases.

“I’ve asked our community members to reduce their personal contacts, stay home, and stay local, as the most effective things we can all do to slow the spread of COVID-19 in Whistler,” he said in an emailed statement.

Vancouver Coastal Health has also flagged several restaurants and bars for potential COVID-19 exposure, with dates spanning most of January. So far this week, six eateries have been the subject of alerts.

Whistler Blackcomb spokesperson Marc Riddell told Daily Hive that the mountain has some staff in self-isolation, as is the case with many other local businesses throughout the health region.

“We were made aware by Vancouver Coastal Health, that some staff may have been exposed to COVID-19,” he said in an emailed statement. “Following the recommendation of VCH and Vail Resorts own internal policies around exposure, those staff members are self-isolating. There is no impact to staffing or operations, and the Whistler Blackcomb team is supporting those employees impacted.”

Premier John Horgan doesn’t believe the activity of skiing or snowboarding is particularly risky but added sometimes people are careless once they finish on the slopes.

“If you’re on the black diamond run and you’ve got a mask on, a helmet on, you’re not a prospect for transmission of COVID-19,” he said. “It’s when people leave the hill and look for the party is where transmission happens.”

Health officials have told British Columbians that now is not the time to travel and say skiers from the Lower Mainland should stick to Cypress, Grouse, and Seymour. The province sought legal advice on a potential travel ban forbidding out-of-province visitors from coming for a vacation at Whistler but ultimately decided it wouldn’t have the authority to block travel, and the logistical challenge would be immense.