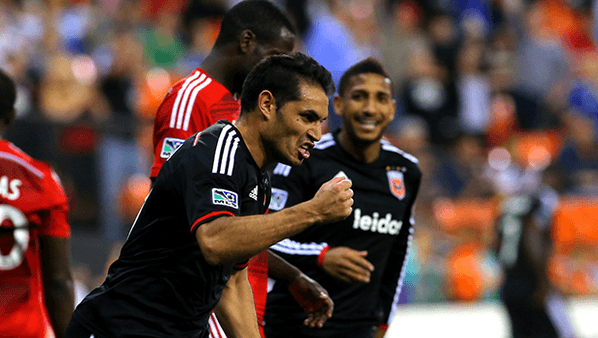 The ink was still drying on the trade agreement that sent Fabián Espíndola from DC United to the Vancouver Whitecaps when rumours began swirling that the 31-year-old may not actually join Vancouver for the remainder of his contract.

Sticking w/ the "Where is Fabian?" theme, you may notice Espindola not on bench for #VWFC . I'm told he could be sold to a Liga MX club #MLS

Speculation points to the fact that the Espíndolas welcomed a new baby to their family a couple of months ago, and the striker only has four months left in his contract and may not want to commit to more time in MLS or uproot his family for such a short period of time.

During the Whitecaps’ game on Saturday, Espíndola had still not joined the team as he was sorting out his personal affairs. That tune has changed since then.

Marc Weber reported that Whitecaps president Bobby Lenarduzzi declared that Espíndola had requested some time “to collect his thoughts.”

Lenarduzzi on Espindola: "He’s asked for a bit of time. He’s got a 3-month-old and just wanted some time to collect his thoughts." #vwfc

The situation has sparked several conversations among supporters. Some see the refusal to report as unprofessional while others place the blame on the Whitecaps Front Office for completing a deal for a player who didn’t want to be dealt.

Re: Espindola – He has a newborn baby, & #WhitecapsFC have offered him 6 months in a different country. Would you uproot your family? #VWFC

Club changes are an intrinsic risk in the life of a footballer. Sacrificing time with family, for better or worse, comes with the territory and players should be used to it. We must remember that there are a multitude of industries that require professionals to be away from their families and be relocated at a moment’s notice.

My point is that there are worse jobs that pay significantly less that push people into the exact same situation. To quote Hyman Roth (google it): “This is the business we have chosen.”

The reality is that if the player fails to report in Vancouver, he will be breaching his contract. A contract that is held by MLS so the league would probably step in and aid in remedying the situation. At the end of the day, it seems unlikely that Espíndola will ever wear a Whitecaps kit.

This brings us back to Enrique Esqueda, the Mexican striker who, judging by the trade for Espíndola, had not become an instant signing for the ‘Caps. With Espíndola out of the picture, perhaps a window has opened for the Mexican forward to crawl into this roster.

He seems, at least, keen to show himself (and his teammates) to the Vancouver faithful. Maybe wait until you are out of the shower before you snap the selfie next time, Enrique.