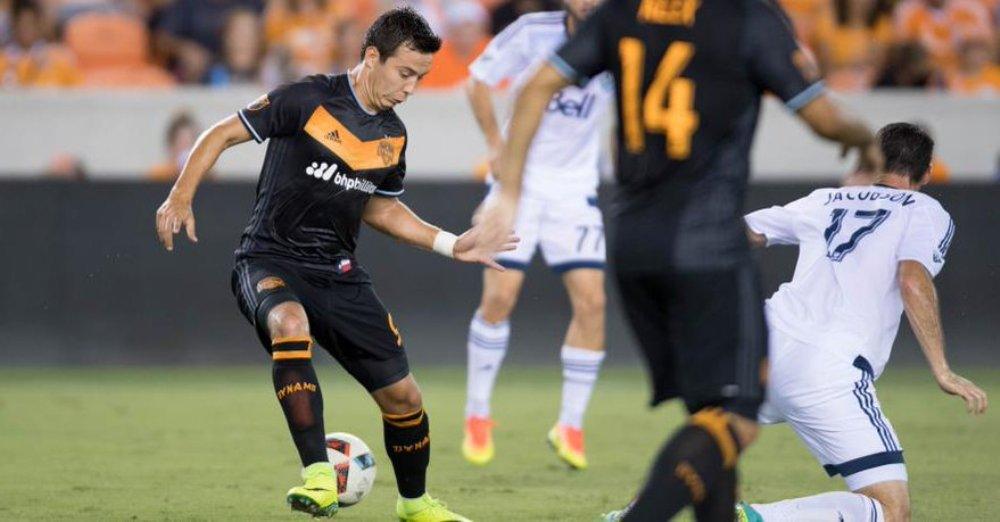 Six years after joining Major League Soccer the Vancouver Whitecaps finally have a brought home a point from a match in Texas.

Despite a shaky start to the match the Whitecaps (W8-L6-D8, 30 pts – 5th Western Conference) battled hard in the Texas heat to earn a 0-0 draw against the Houston Dynamo.

1. By the skin of their teeth

The Whitecaps have had a very bad habit of giving up late goals recently. These late goals have cost the ‘Caps the Voyageur’s Cup and plenty of valuable MLS points as well.

Tonight the Whitecaps battled hard through 90-minutes of the brutal Texas heat, and brought home a point for their efforts.

Houston came at the ‘Caps right from the very first kick of the ball. The Dynamo had several early chances, the best of which came in the 8th minute when an unmarked Andrew Wenger put his shot over the Vancouver goal.

Proud of this team. Hard work got us a point in a though place to play #VWFC #HotAsH…

The match ended in very much the same manner in which it began. The Dynamo pressed hard in the four minutes of second half injury time, and David Horst came very close to scoring a winning goal for the Dynamo.

With literally seconds left in the match, Horst connected with a cross that was whipped into the box from the left flank by Abdoulie Mansally. David Ousted, who had already made several big stops during the match for Vancouver, rose to the occasion once again, this time by punching the ball out of play to preserve the nil-all score.

The Lone Star State has been a tough, tough place for the Whitecaps to play over the years. While it may not have been a pretty match to watch, the ‘Caps stuck to their game plan and deserved the point they took home.

While Ousted’s heroics between the sticks drew most of the attention, defender Kendall Waston did his fair share of defensive work with 13 clearances.

At the other end of the pitch Vancouver rarely threatened Joe Willis in the Houston goal. Vancouver substitute Erik Hurtado came closest to scoring for the ‘Caps with less than ten minutes to play. Hurtado’s goal, however, was disallowed when the officials ruled that he controlled the ball with his upper arm prior to taking his shot.

84' Goal waved off! Whitecaps put the ball in the back of the net but it's brought back for offside. https://t.co/OpO5YU9wQC #HOUvVAN

It may have taken 5-and-1/2 years, 192 matches and 10 losses to the Texas MLS teams, but finally the Whitecaps brought home a point.

The Whitecaps’ right back position has been under intense scrutiny all year after veteran Steven Beitashour left for Toronto FC last winter. Whitecaps head coach Carl Robinson is not afraid to give his young players their chance at playing in MLS, and tonight it was rookie defender Cole Seiler’s turn as Robinson continues to search for a solution to the right back conundrum.

Cole Seiler all smiles ahead of his MLS debut tonight 😄#VWFC #HOUvVAN pic.twitter.com/OZgAJ237nP

Robinson’s solution, or so it seemed, was to replace Beitashour with the young and unproven duo of Fraser Aird and Jordan Smith. While both players have played well at times, the position has been exploited by savvy MLS attackers all season long.

Seiler, 22, attended Georgetown University, and was picked 16th overall by the Whitecaps in 2016 MLS SuperDraft. While Seiler did play for the Whitecaps earlier in the week in the friendly match against Crystal Palace FC, he has spent the entire season playing for the Whitecaps USL team, WFC2.

Did Seiler do enough to impress Robinson and make a claim on the right back position? That’s hard to say, but the rookie certainly had a solid debut and did not look out of place in his first MLS match.

Early on Seiler was caught out by Houston’s attackers on a couple of occasions, but his confidence grew during the game. Whether or not Seiler has done enough to bump Aird or Smith down the depth chart remains to be seen, but at the very least he’s given Robinson something to think about.

4. Bonus Kick: Is Espíndola on the move?

Earlier this week the Whitecaps announced they had acquired striker Fabián Espíndola from D.C. United in exchange for allocation money. The Argentine has 4 months remaining on his contract, and is widely considered to be a ‘rental player’ for the Whitecaps.

The ink may still be drying on the trade paperwork, but that hasn’t stopped some pundits from speculating that Espíndola will not be coming to play in Vancouver after all.

Sticking w/ the "Where is Fabian?" theme, you may notice Espindola not on bench for #VWFC . I'm told he could be sold to a Liga MX club #MLS

It would be highly unusual for the Whitecaps to trade a player they only just acquired. It is also possible that the ‘Caps have something else in the works and Espíndola is just a piece in a puzzle. It is also conceivable that Espíndola may be considering other options, and does not want to play in Vancouver for the remainder of his MLS contract. During the television broadcast of the match, TSN reported that Espíndola was left in Vancouver to ‘acclimatize’ and to spend time with his family.

Earlier this season Galarcep also reported that former Whitecap Darren Mattocks was on the verge of joining a Chinese club, and that the Whitecaps and Crew SC had arranged a deal to swap forwards Kei Kamara and Octavio Rivero.

Ultimately, Mattocks moved to the Portland Timbers, Kamara was traded to the New England Revolution, and Rivero was transferred to Colo Colo in Chile.