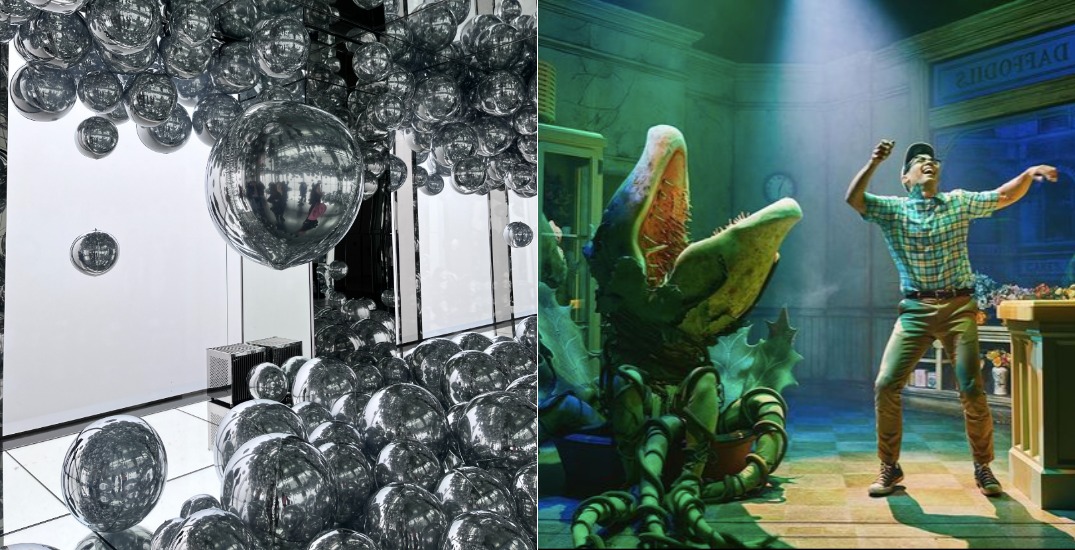 There’s a lot to do, and learn, while in New York, but it’s more than just a big city with big attractions: it’s people, too.

Whether you’re looking for the traditional attractions, some off-the-beaten-path spots, or just some place new to see, we’ve got you covered. If you’re planning your trip and are looking for ideas to explore here, check out NYCGo for all the latest must-see spots.

First, let’s go over the COVID-19 safety. In New York, most indoor settings don’t require a mask. The ones that do will be clearly labeled. If you’re making your way around the city using public transit, ride share or taxis, you’ll need to have your mask handy. Some places will also check your vaccine passport, the Canadian QR code on my phone worked just fine everywhere that asked for it, so make sure you’ve got it handy!

Flying Porter via Billy Bishop airport makes this trip a breeze. The airport is easy to access and far less busy than Toronto Pearson, so getting through security is quick!

Not to mention that the flight is over before you know it. There’s barely time to eat the complimentary snack (I’m still thinking about those shortbread cookies) before it’s time for the descent.

While Porter doesn’t offer a direct flight to New York City, we landed in Newark, New Jersey and were whisked to our first destination using a Blacklane chauffeur. If a private car is out of your budget, there’s easy transit to Manhattan from Newark, too. Just hop on the AirTrain and you’ll be on your way.

Whether you want to take in a newly gentrified area of the city or want some gorgeous park views, you’ve got plenty of options.

The famous Equinox Hotel in Hudson Yards is a very new and modern hotel. It has all the amenities and is steps away from shops, the High Line, the Hudson River, and, well, so much more! 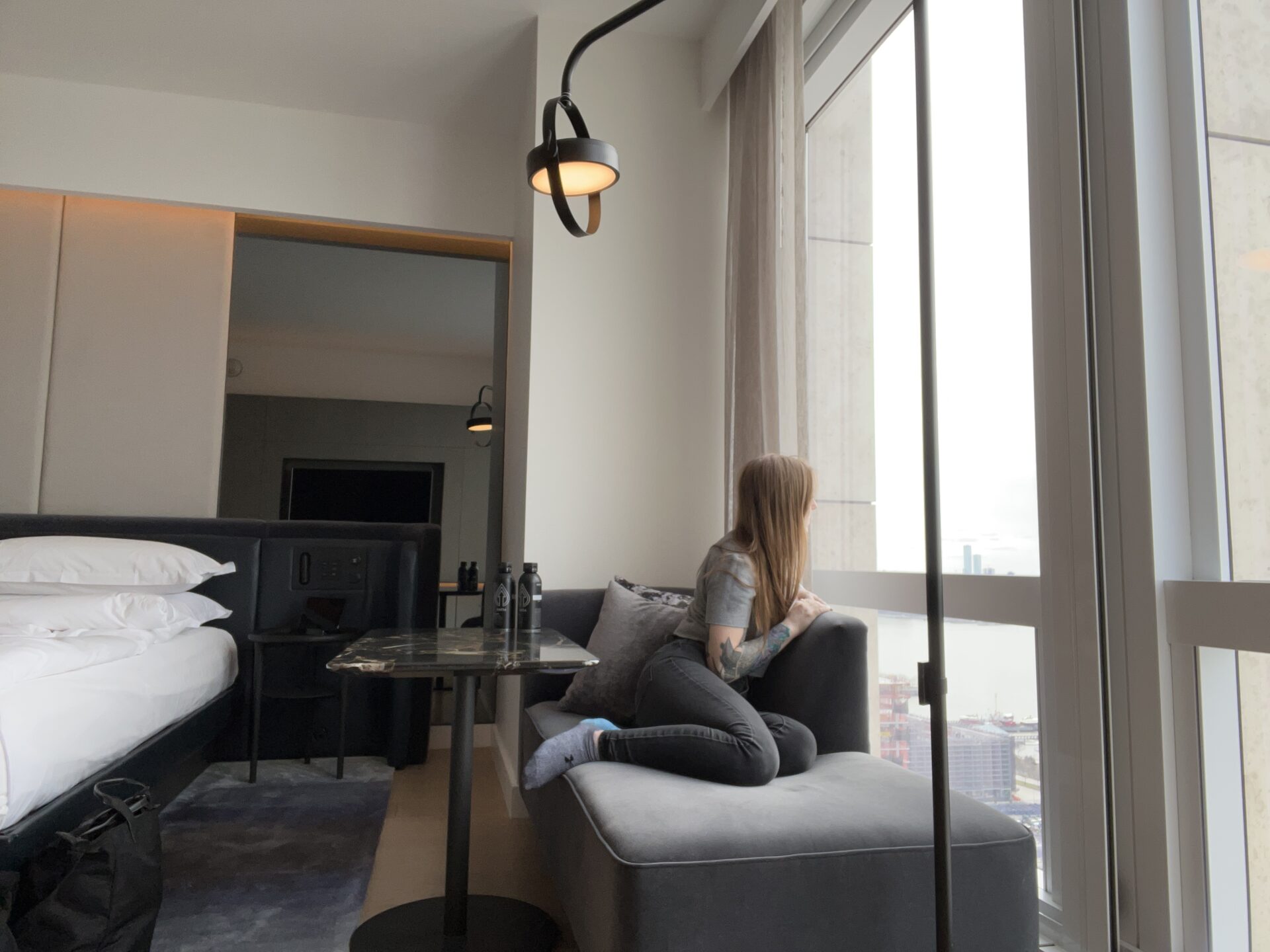 The monochrome decor offers a sleek modern vibe to the hotel. The rooms come equipped with a Nespresso machine complete with collagen creamers, an incredibly comfy robe, and reusable water bottles for your stay.

The view isn’t so bad either. We got a bird’s eye view of the rail yard, Hudson River, and across to New Jersey. 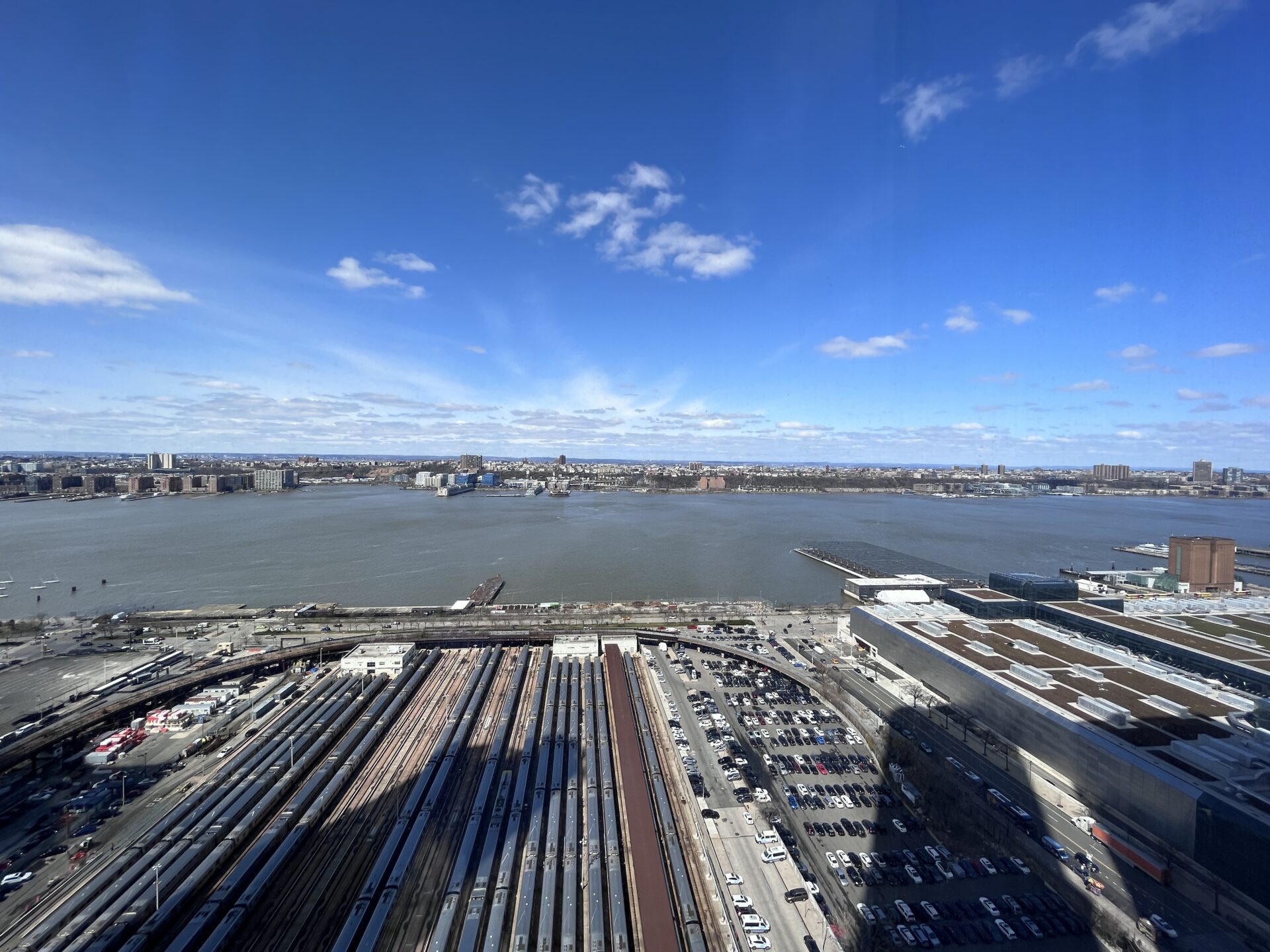 View of the rail yard from Equinox Hotels

The hotel even has its own shampoo, conditioner, soap, and lotion. Spoiler alert: they smell incredible! They’ve got scents for the morning to perk you up and the evening to calm you down. We’ve never taken so many showers while on a trip.

Equinox has a heavy emphasis on sleep, they offer a booklet of rituals, or meditations, to do before bed. The rooms are shockingly quiet, I don’t think I heard a single siren or car horn honk. You can even set the room to be quiet and cool so you have a disturbance and sweat-free slumber.

After two nights at Equinox, we packed up and headed for Park Lane New York. A very different vibe and an entirely different view!

Park Lane offers both park and city views. We were lucky enough to snag a view of Central Park, so we could take in the gorgeous scene without getting wet in the rain!

The recently renovated hotel has been designed to emphasize the connection to the park. When I entered my room, an animation was playing on the TV screen, with birds chirping in the background, really selling the vibe of having walked into the park. 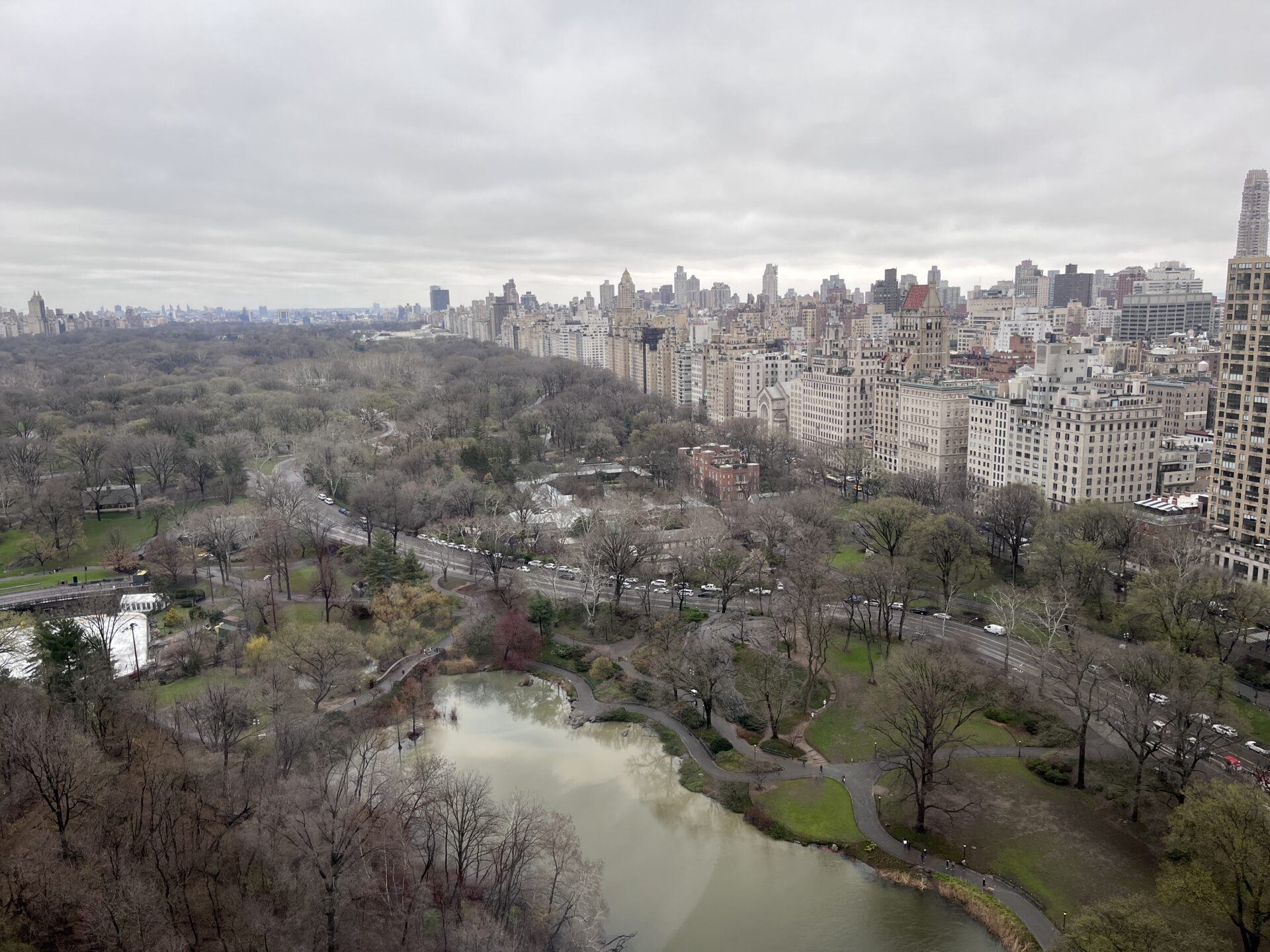 I’ve never dropped my bags and run so quickly to a window as I did at Park Lane, the views are absolutely stunning. I could not get enough! 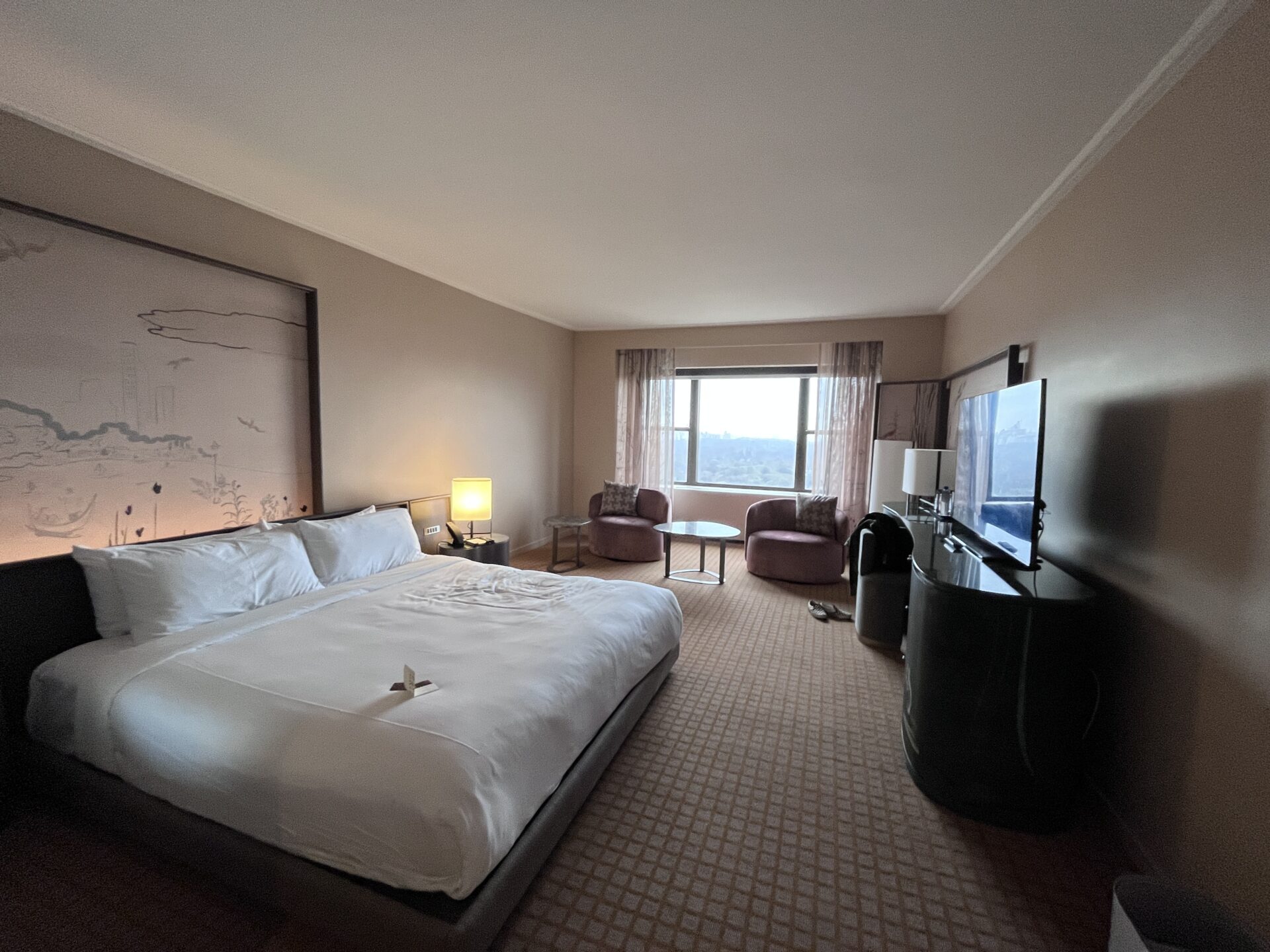 Take a stroll along the High Line! It’s an old train track that’s been repurposed for pedestrian use. It’s nice for a stroll away from the cars and transit below.

Why not stop at the Whitney Museum of American Art while on your walk? Take the High Line to the museum and take in the contemporary art. You won’t want to miss the biennial show.

A post shared by Whitney Museum of American Art (@whitneymuseum)

While you’re in the area, you can visit Little Island, too! Little Island is a human-made island park, providing much-needed green public space on the piers south of Chelsea.

Grab a CityPASS so you can hit up some of the city’s many attractions! A CityPASS will grant access to a number of spots like the Guggenheim, the Empire State Building, Top of the Rock, The 9/11 Tribute museum, and more. If you want to hit up as many attractions as possible, it’s the best way to do it! 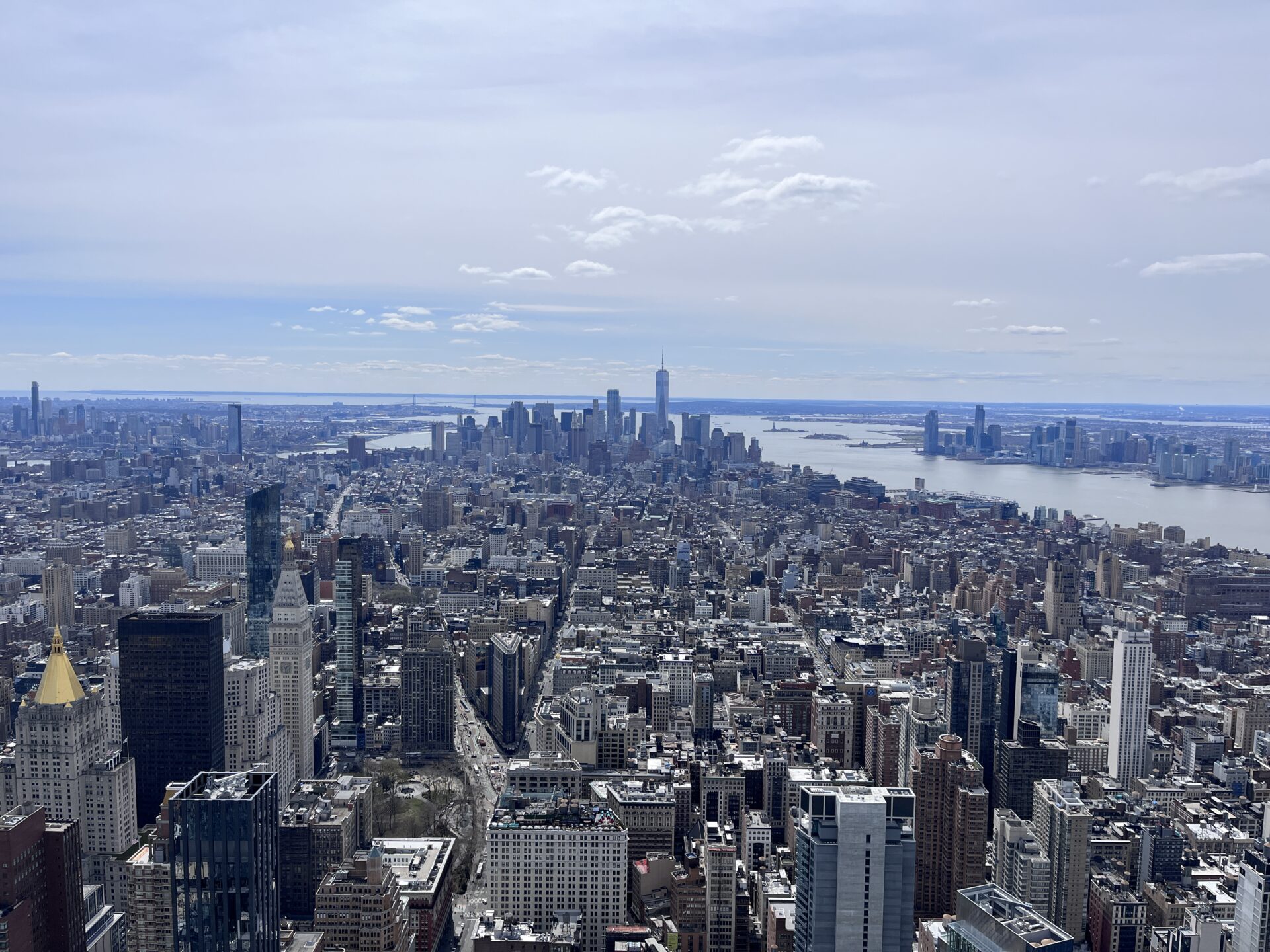 View from the Empire State Building

If dizzying heights are your thing, you’ll want to head to SUMMIT One Vanderbilt. It’s way more than an observation deck, it is a whole experience, which starts on the ground floor with a short film. Once you head up dozens of floors in a matter of seconds on its ultra-fast elevator, you’ll be in a mirrored room touring over the city.

It’s a trippy room, and the whole experience is really well thought out. Between each observation room, there’s a sort of “cooling off” room, where there are fewer mirrors and reflective surfaces. A chance to ground yourself, some 90 floors above street level. 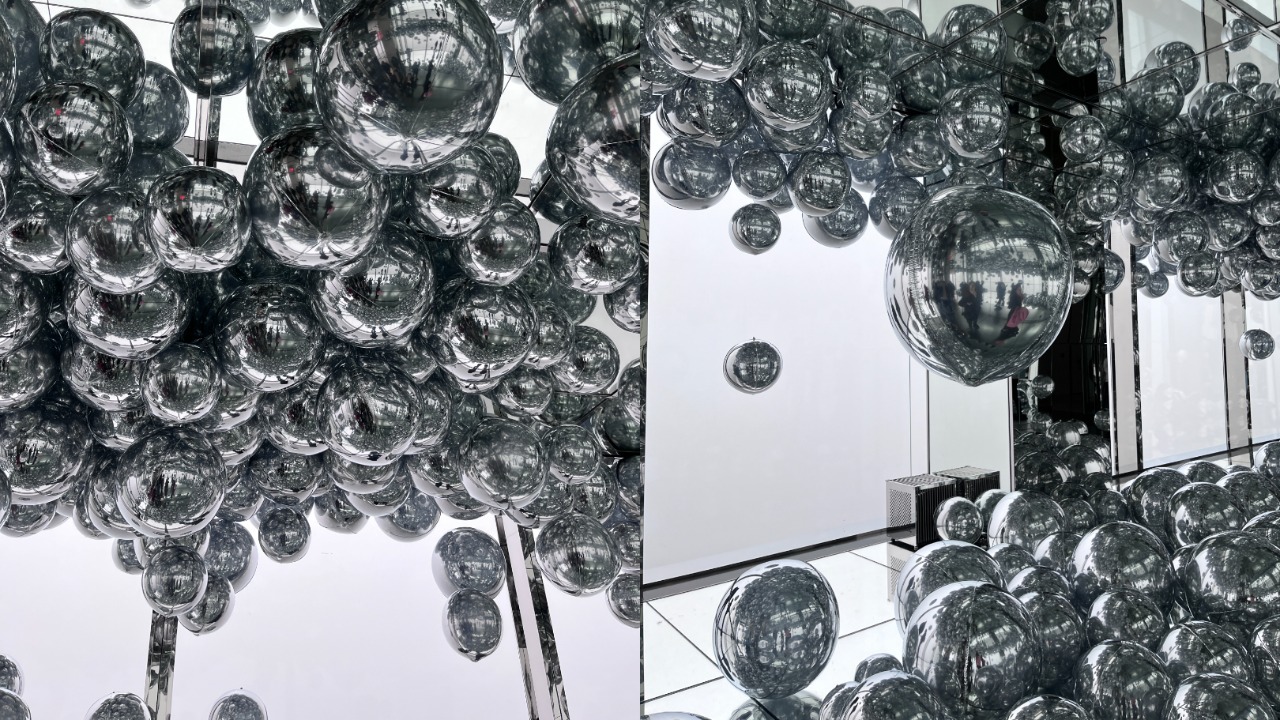 Mirrored balls at SUMMIT One Vanderbilt

Unluckily, we visited on a day with low visibility, the grey outside the window is a cloud we were in. That said, it was still a really fun experience. The room with the mirrored balloons was really incredible.

For a different and more sombre walking tour, head on a slavery and underground railroad tour with Inside Out Tours.

The tour takes you on a historical journey through the city, showing a side that’s often hidden away. You’ll learn about the city’s slave market, a former underground railroad stop, and see the African Burial Ground Memorial. It’s a way to get to take in the city, while also learning more about colonial history and its impact.

Get out of Manhattan

Had enough of Manhattan? Queens is a short trip from the core and there’s so much to see and explore while you’re there!

Manhattan is just across the river from Queens, and you can hop on a little ferry to get to your destination or take the 7 train even deeper into Queens. 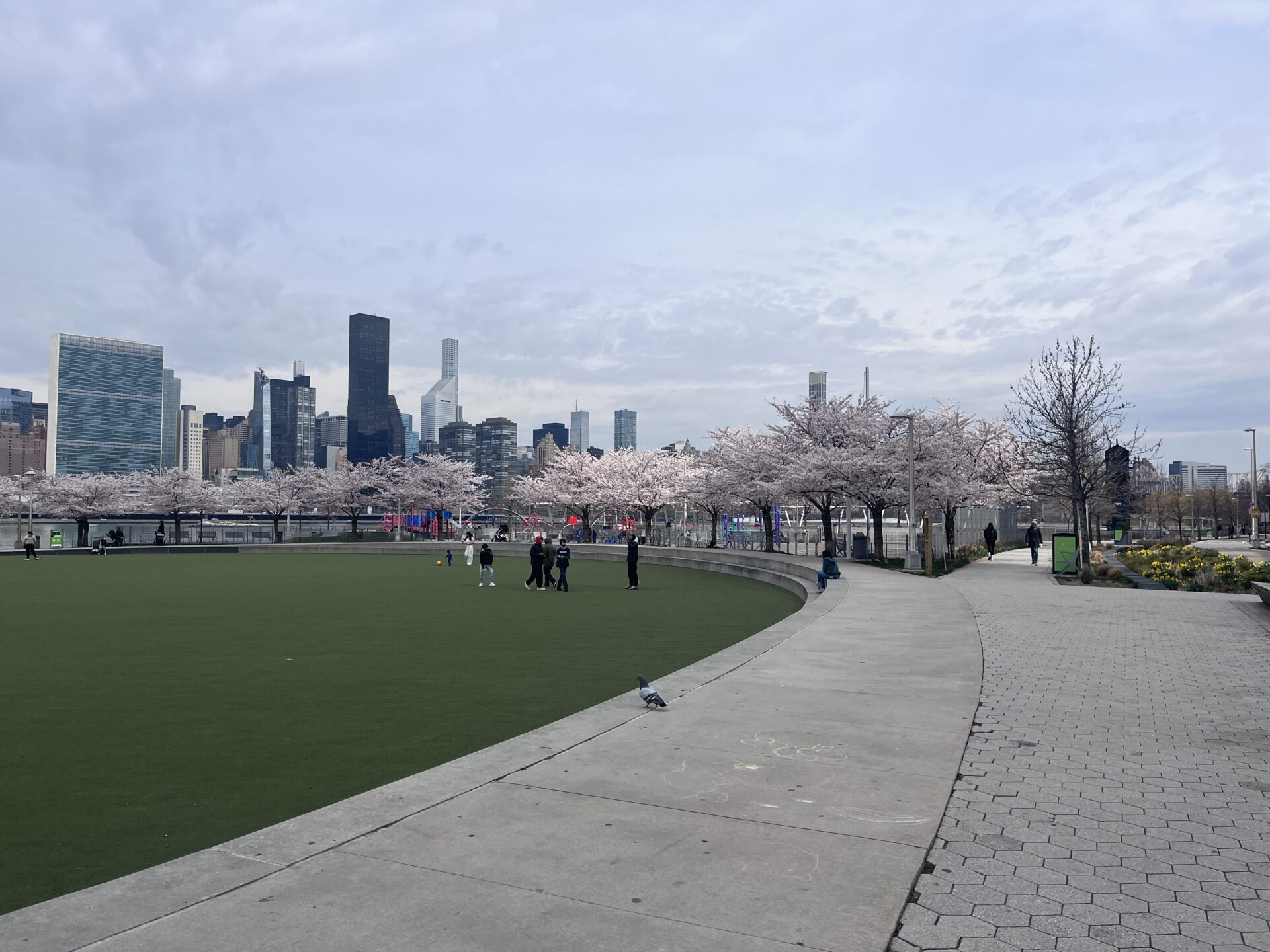 Queens is an exciting spot to explore, and there’s a lot of new stuff to see, and old haunts to visit. Whether you’re there to take a look at where rapper Nas grew up, for a food tour, or to kill time, there’s a ton of history to explore.

Along the river, you can stop by the Pepsi-Cola neon sign that has been given landmark status. Pretty neat if you’re into big signs! 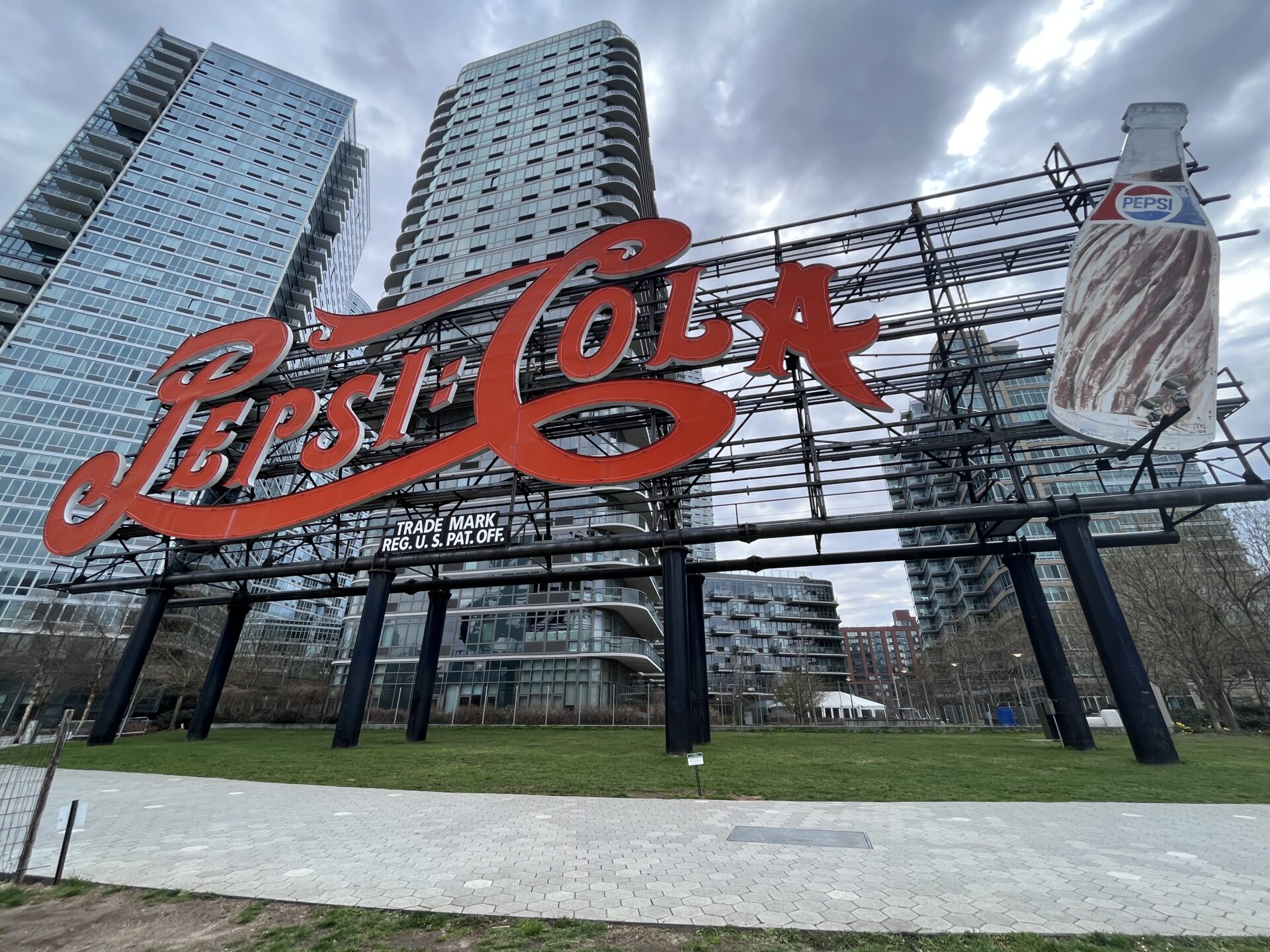 Jazz musician Louis Armstrong grew up in Queens, and you can actually go see the house he lived in. It still looks as he left it, and it’s definitely a must-see. 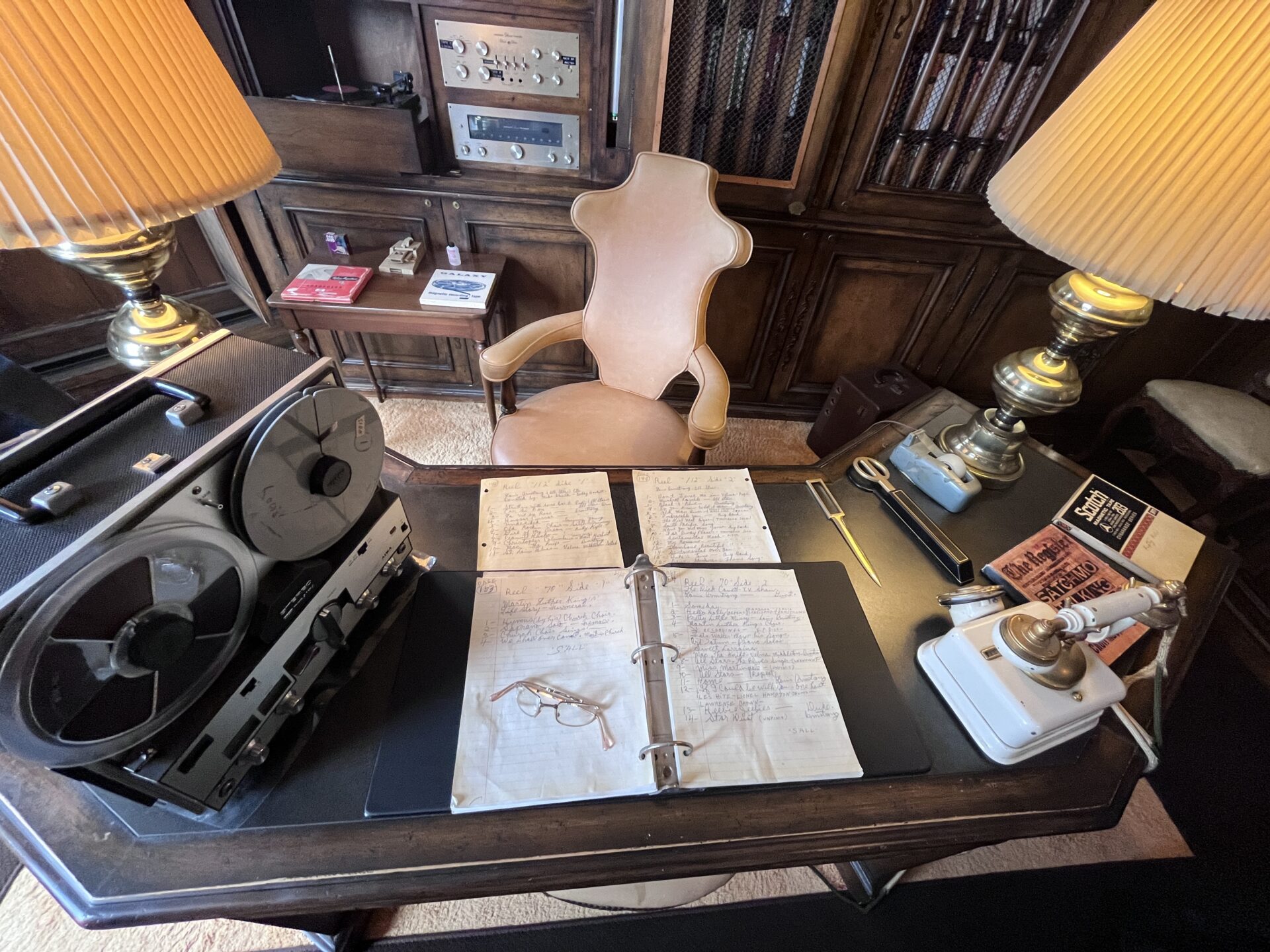 There’s something incredibly cool about getting a glimpse into the life and mind of one of the most influential jazz musicians of all time.

The Louis Armstrong House Museum feels frozen in time, with everything seemingly just where they left it. The bathroom is spectacular, too. 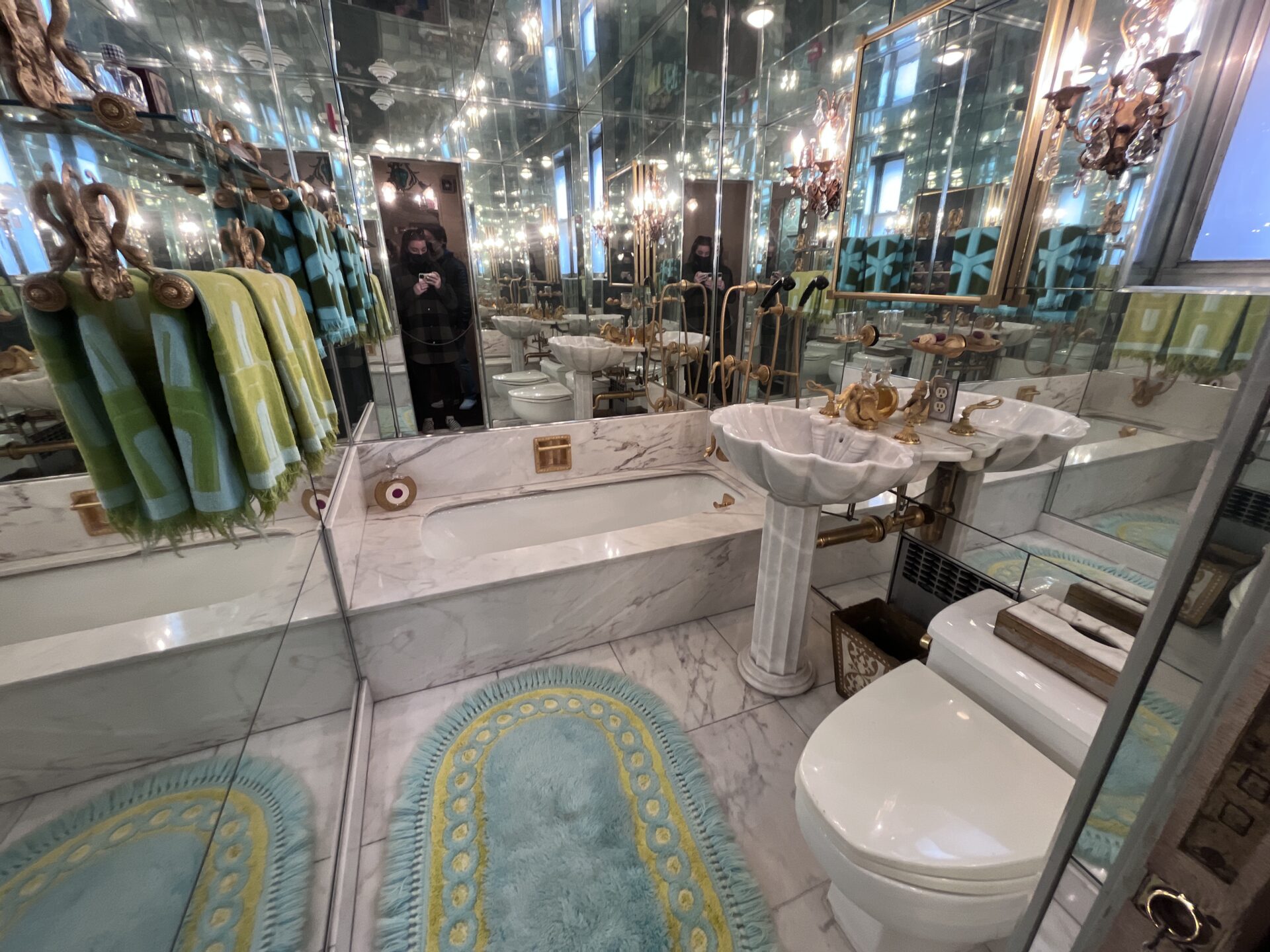 Okay, okay. Technically I went to an off-Broadway show, but I loved every second of it! I was lucky enough to see the cast of Little Shop of Horrors and literally from the first second of the play I was hooked. How could I not be as the narrator begins the play by announcing it all began on the same day as my birthday!

A post shared by Little Shop of Horrors (@littleshopnyc)

The show, at Westside Theatre, was so much fun. The music was great, the jokes were funny, and the actors were phenomenal. All around, a wonderful experience! Masks were worn during the performance and vaccine certificates were checked at the door, it felt safe despite being a packed theatre!

There’s so much to see and do in the city, you’ll just have to keep going back to tick things off your bucket list. Happy travels!

The author of this article was partially hosted by NYC & Company, Equinox Hotels, Park Lane New York, Inside Out Tours.