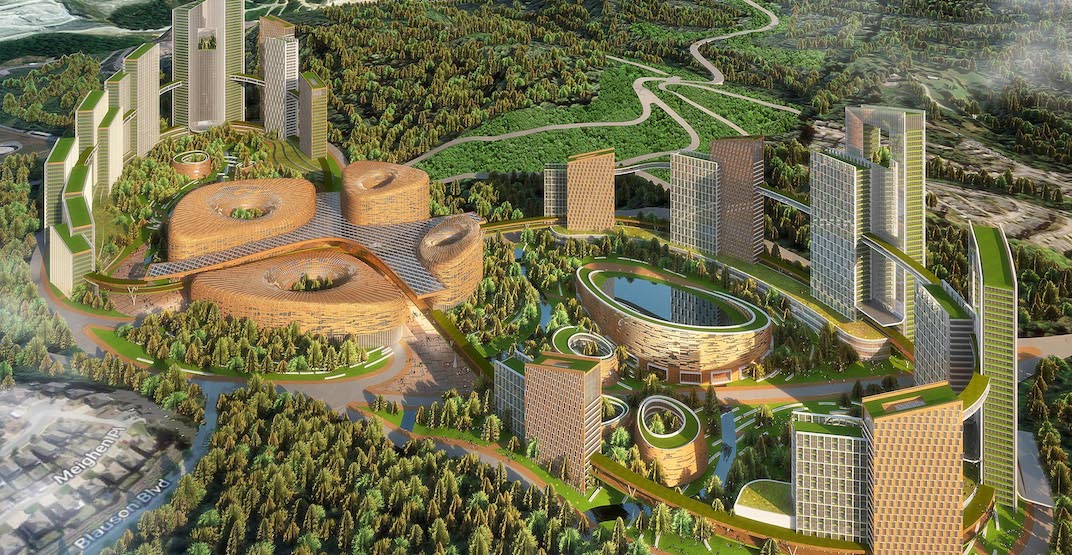 “What I see here is very visionary. When I first saw it, I said, ‘Oh, is that in Dubai?’ But no, it’s in Abbotsford,” said Abbotsford city councillor Ross Siemens, describing WeTown — a colossal-sized, high-tech city within a city proposed for the Fraser Valley municipality.

Daily Hive first reported on the existence of the proposal in March of this year, and since then the project has gone through its first review through the City of Abbotsford, with city council this week voting 6-3 in favour of allowing city staff to further consider and explore the mixed-use development’s viability.

Hilltop city of the future

According to the submitted proposal, Abbotsford-based Auguston Town Development (ATD) is keen on developing its 91.5-acre hillside parcel just south of McKee Road near Blauson Boulevard, and a five-minute drive from the Trans Canada Highway.

Constructed in four phases over 20 years, the ultimate build-out of WeTown could host up to approximately 18,000 jobs and 29,000 residents within about 12,500 homes. 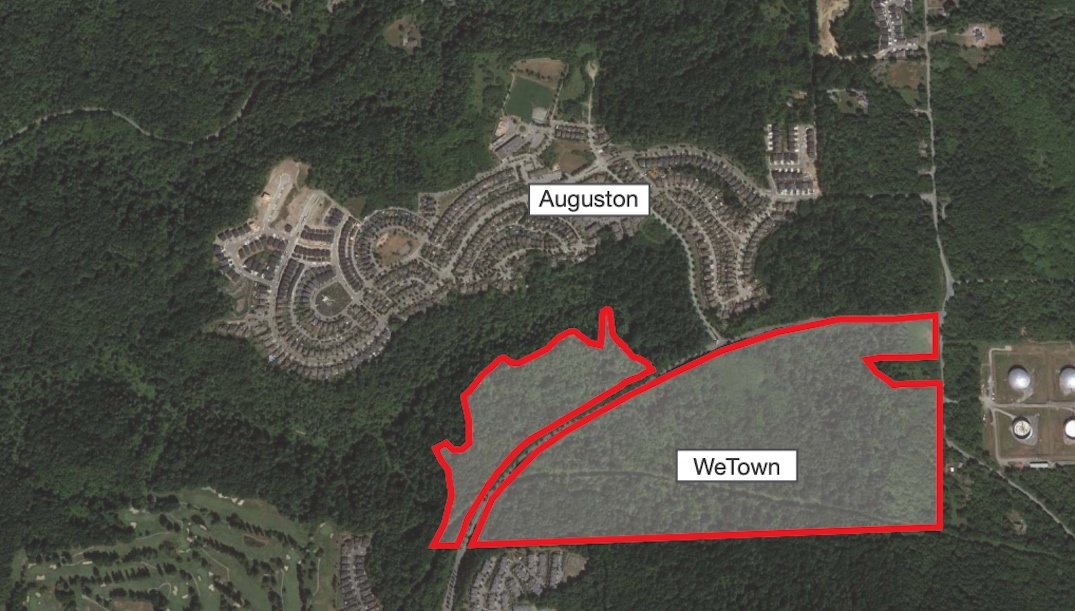 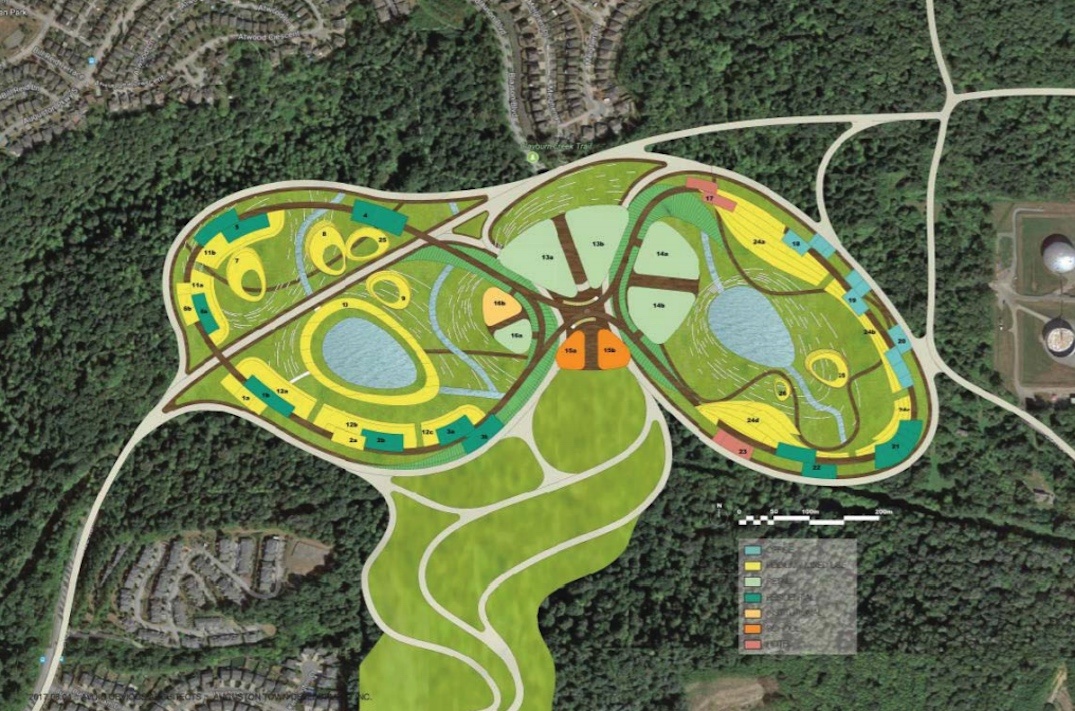 ATD envisions WeTown’s location and scale will attract a cluster of major high-tech companies, as well as a tech-focused post-secondary institution, such as an expansion of University of the Fraser Valley or perhaps even a satellite campus of a leading international university.

A university the size of the California Institute of Technology is specifically suggested, not including a business and incubation complex that could be operated as an off-shoot of the institution. 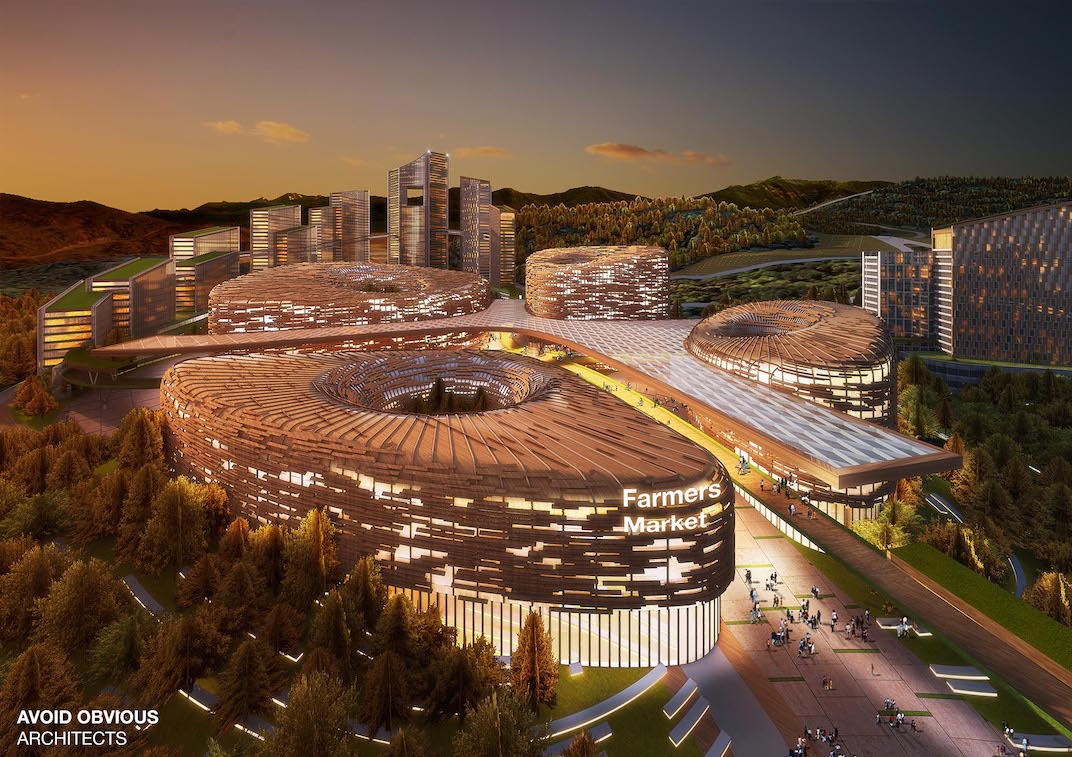 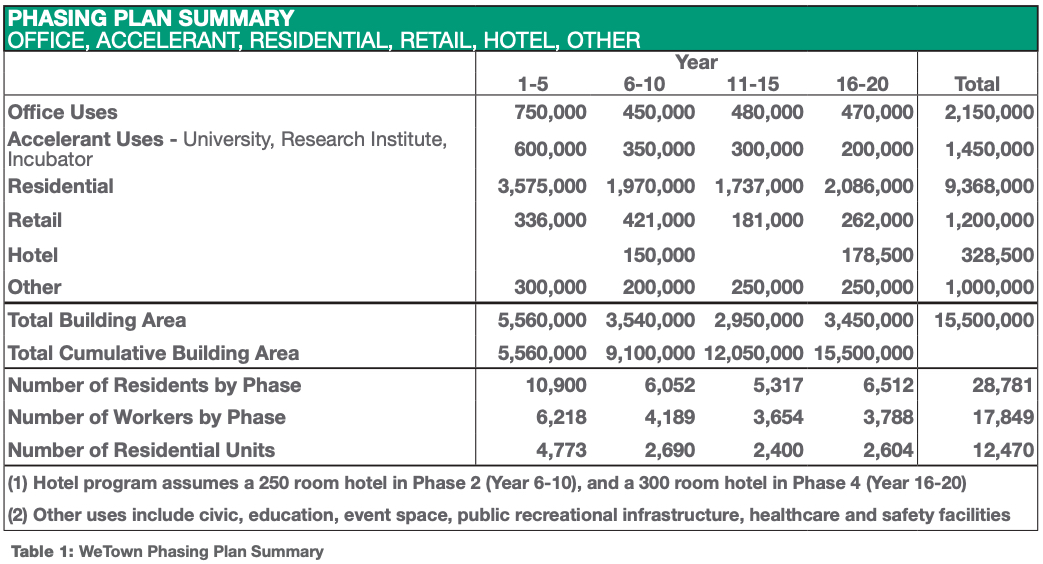 “The programming of WeTown is designed to build on the current strengths of BC’s high-tech sector, while facilitating an investment in innovation capacity. Employment space purpose-built for large tech employers will form the overwhelming majority of office space at WeTown,” reads the application.

“It is anticipated that the opportunity to locate to purpose-built space situated in a picturesque community with abundant housing – while still within a large metro area– will prove attractive to large multinational tech firms, and will therefore result in BC attracting large tech operations at a higher rate than in the absence of WeTown. In turn, being home to a higher proportion of large firms will result in more competitive rates of innovation. Similarly, WeTown provides an opportunity for the creation of institutions that will vastly enhance BC’s innovation capacity.” 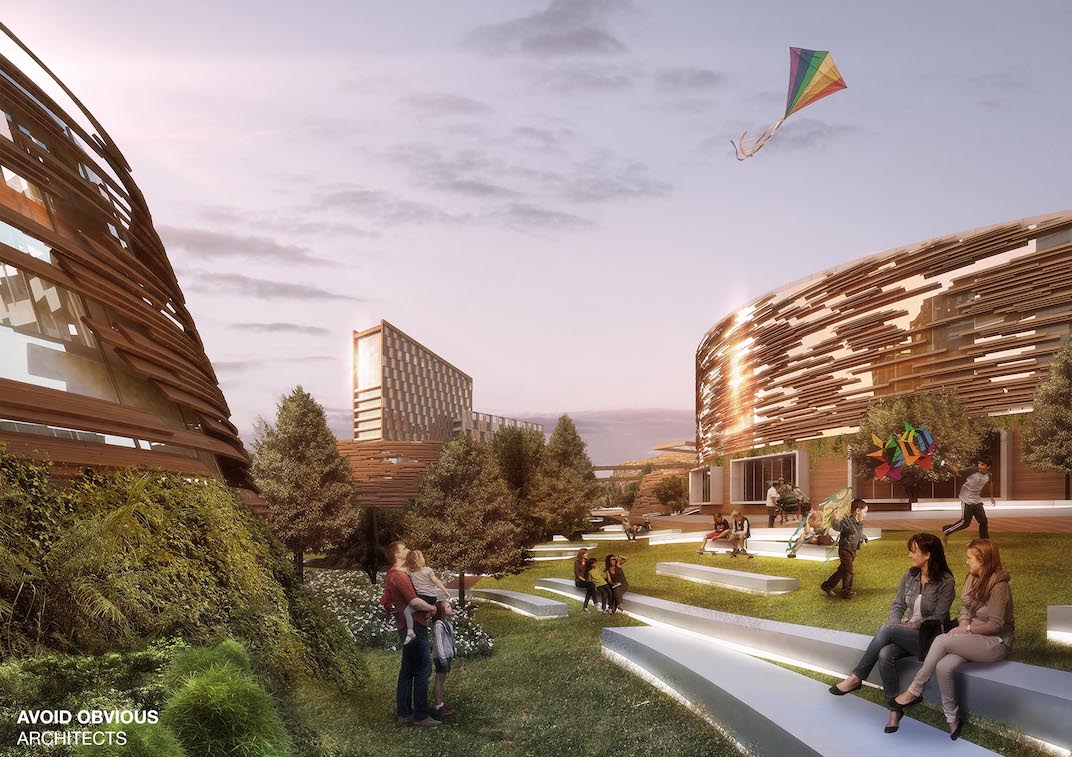 They envision a fully-integrated, pedestrian-oriented community, with buildings connected by looping sky bridges and bike lanes, and a public realm enhanced by ample parks, open spaces, and landscaped paths. The compact design, coupled with infrastructure designed for walking and cycling, will allow for eight-minute trips between the residential area and employment precinct.

High-quality architecture coupled with the latest green building designs are proposed throughout the entire development.

‘The economic viability is highly speculative’

Given the enormity and complexity of the project, city staff hired consulting firm Eric Vance & Associates (EVA) to perform a preliminary land use planning and economic analysis of WeTown.

In its report, EVA shared concerns that the development would amount to a significant departure from Abbotsford’s official community plan (OCP), resulting in not just a second city centre located 11 kms away from the existing designated downtown area but a competing city centre located on the edge of the urban development boundary.

“WeTown would be projected to absorb almost half (48%) of all population growth in the City, and this would predominantly be at the expense of growth in the Urban Core,” read the report. 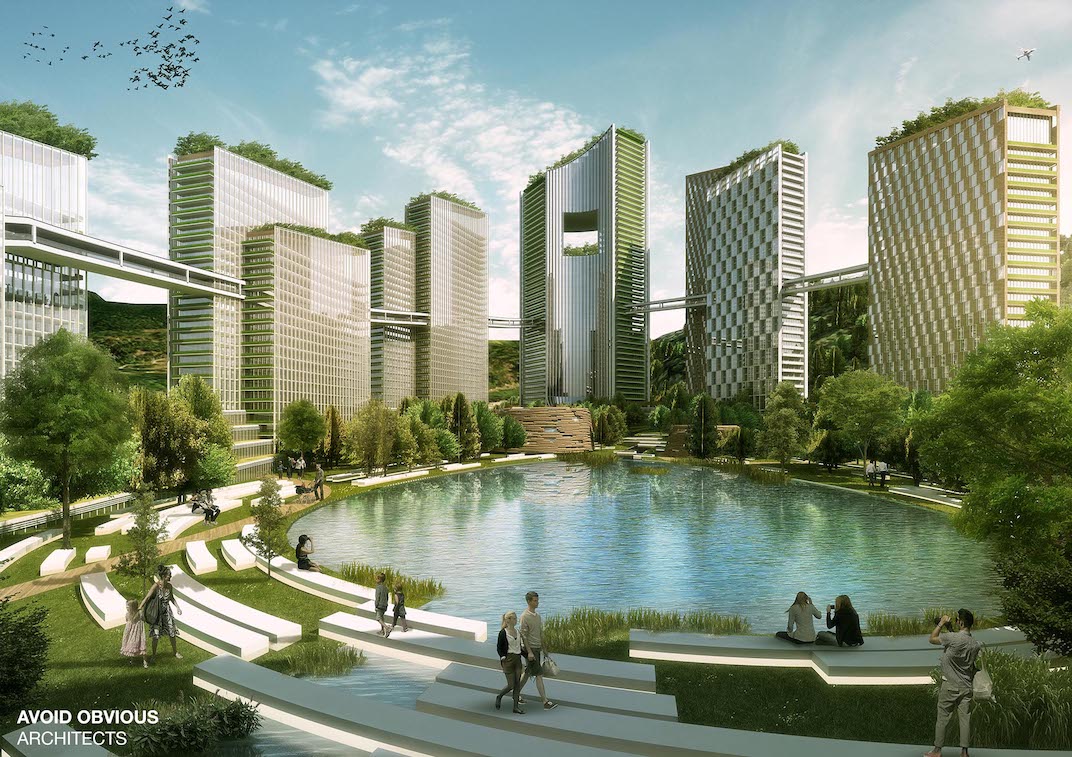 While the proponents believe the transit-oriented development type of density and scale of WeTown will create future demand for public transit investments in Abbotsford, the consultant says it does not foresee rapid transit serving the Auguston Neighbourhood, which they describe would be a very compact community in “relative isolation.”

Even with the proposed supply of 18,500 vehicle parking stalls for all uses, the projected traffic impacts and parking needs are deemed to be typically associated with developments that are directly served by rapid transit.

“If the assumptions made in WeTown around live/work and transportation demand management measures don’t play out as proposed, there could be considerably more external traffic and the need for more extensive road upgrades,” notes the report. 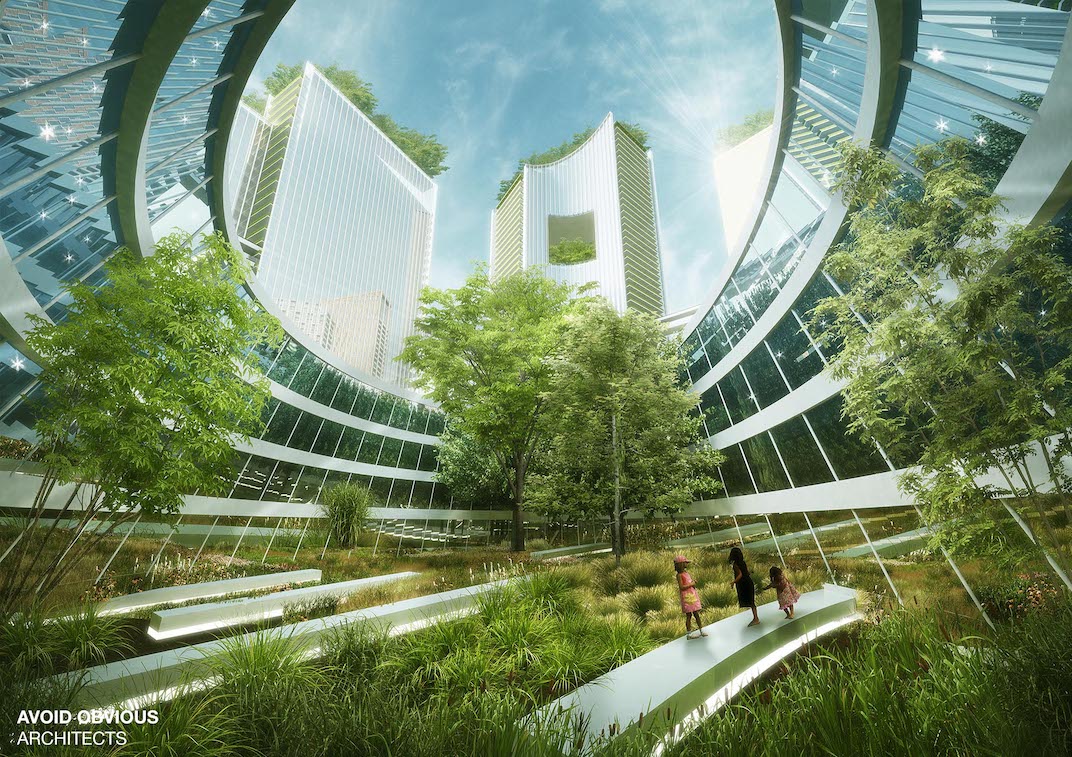 EVA also questions WeTown’s assumption that 82% of the housing units will be occupied by people working and studying on the site, given that even the highest proportion in the Lower Mainland is currently the City of Vancouver at 68%.

Furthermore, the consultant is critical of the limited range of housing choices, as nearly all of the planned housing will be within apartment towers. 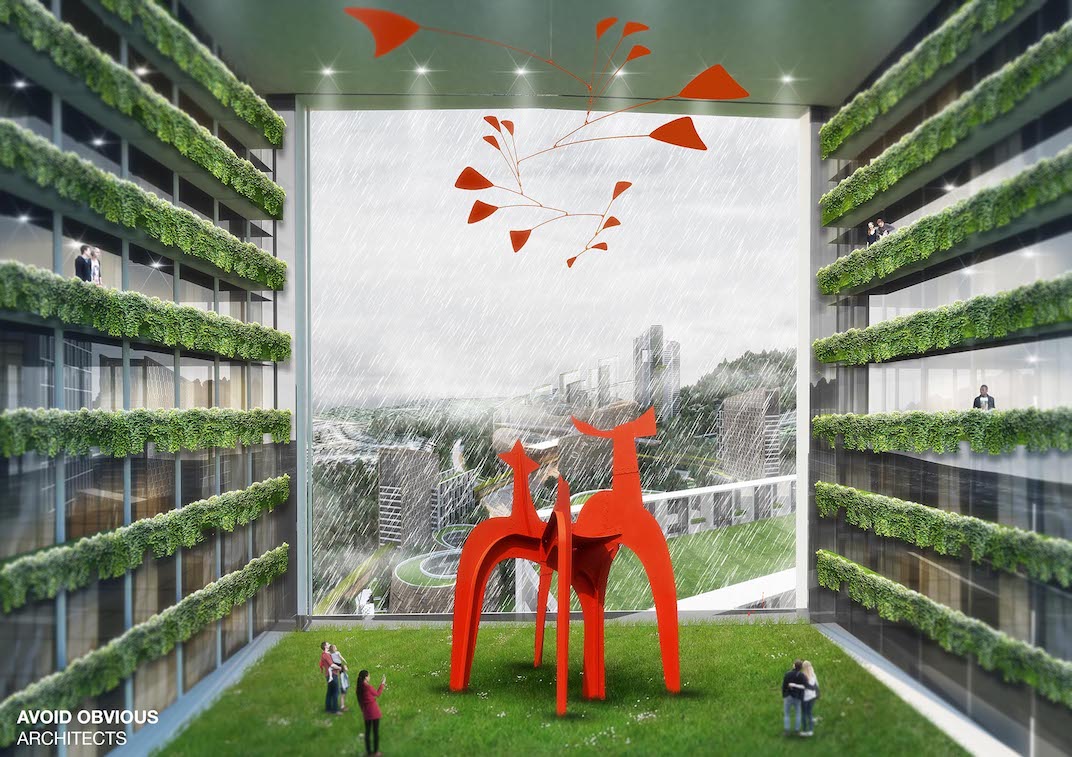 With the project’s overall feasibility, EVA states “that if the project is to proceed on the scale as envisioned, a critical mass of employment activity is a precondition,” which is also acknowledged by the proponent as the key mechanism to propel the development forward.

At the same time, the consultant notes that “it is too early in the process to be expecting firm commitments from employers or institutions to locate at WeTown, but without at least some indication of actual interest from the market, the economic viability is highly speculative.”

One other unique physical challenge that needs to be addressed, says the consultant, is the Trans Mountain Pipeline crossing through the site.

‘We are looking for true visionaries down the road’

City council’s discussions largely centred on the suitably of the location for such a high-density development and the possible financial risk the city could face for both the capital and operational costs of the infrastructure and amenities required.

“This has a lot of potential and a lot of excitement, but I need to know what are the unintended consequences of proceeding for our taxpayers. Are we putting our taxpayers at risk? Is there another way for us to look at this?” said Siemens, one of the councillors who voted against the project. 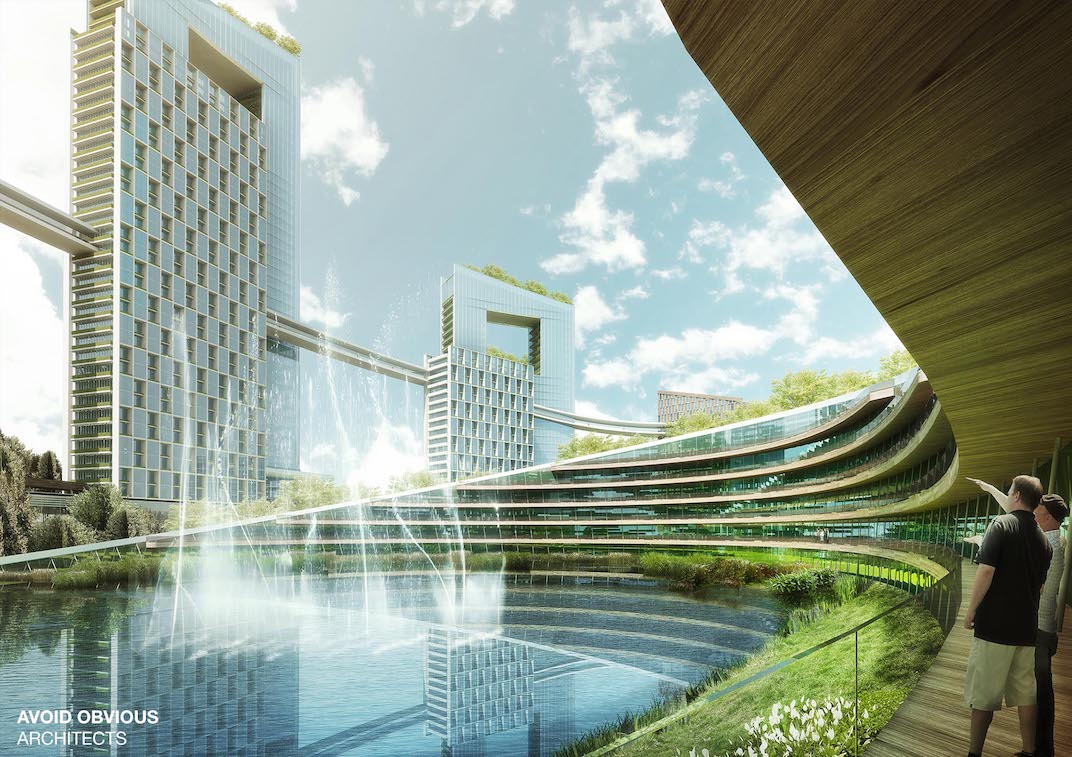 But a majority of councillors believe the proposal, with its potential for immense positive economic impacts for the city, is worth further study and should not be outright rejected.

“The proponent has already admitted that there is homework to be done on their part. And that’s buy-in from senior levels of government, buy-in from universities, [and] buy-in from tech companies,” said councillor Dave Loewen. 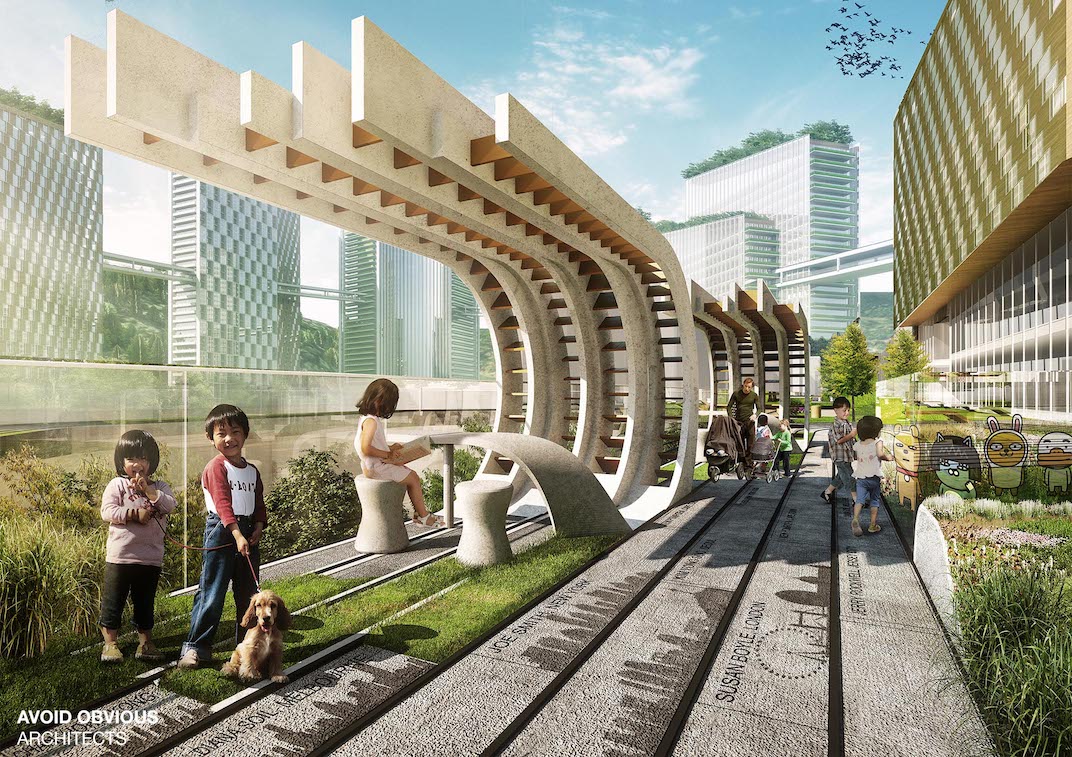 Councillor Patricia Ross also believed other municipalities “would jump at the chance, if not beg” ATD to bring their WeTown concept to their city, if it were to be rejected by Abbotsford.

“I think we’re kidding ourselves if we think that they aren’t going to take this concept and move it to a different community if they don’t get at least support today for us to investigate it and move it forward,” she said.

“This is an incredible development project, very innovative, a live-work balance concept that is very unique.” 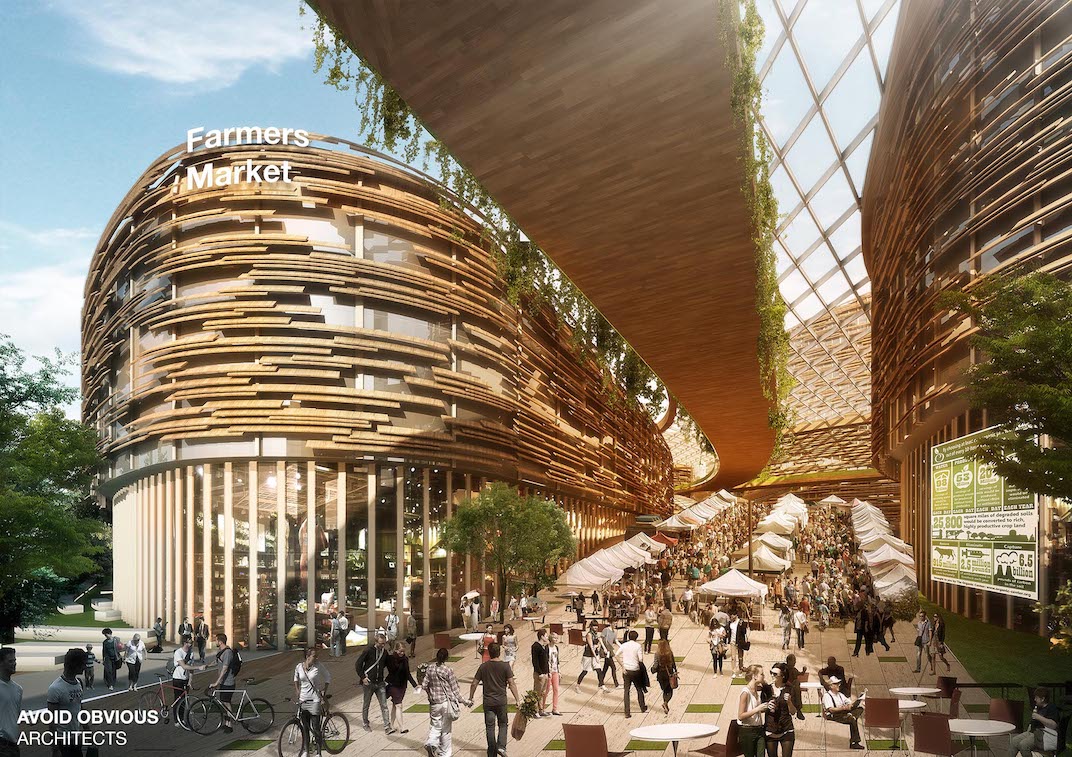 “Right now we are looking for true visionaries down the road… This has been one of the most exciting things that has happened not just here in Abbotsford but in the Pacific Northwest in decades.”

Banman says the high-tech employment could create much-needed high-income jobs for the region, while also generating a significant infusion in new housing supply to help address the housing affordability crisis. 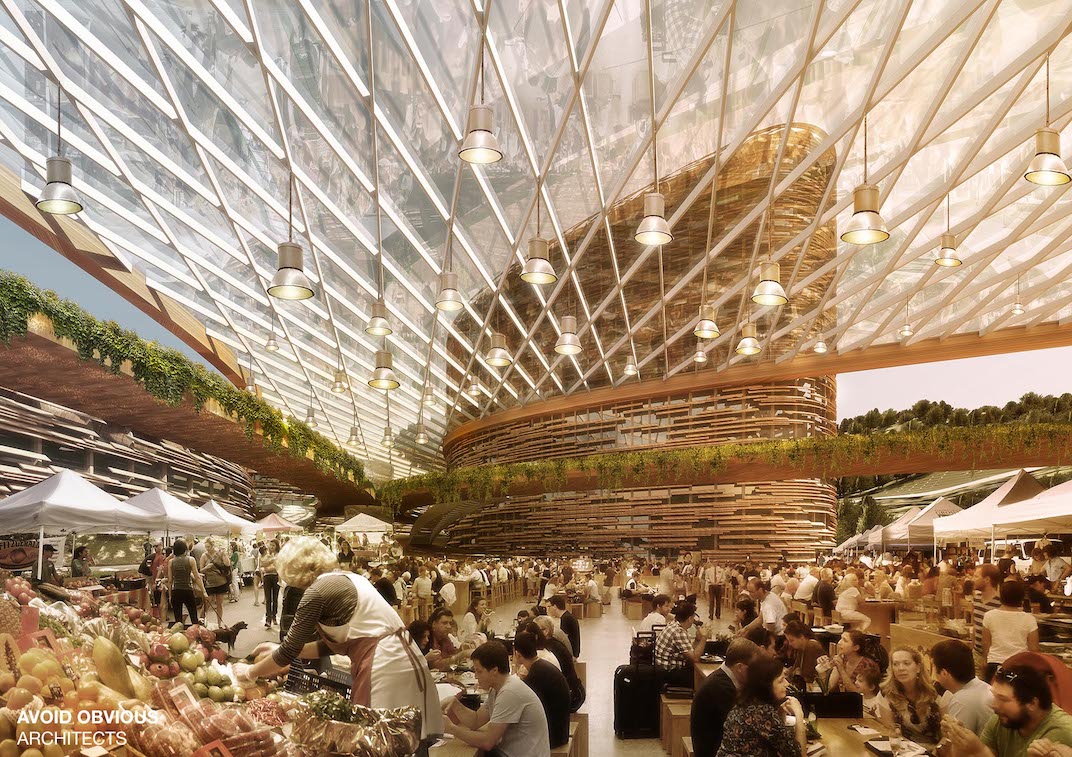 “My fear, if we do not continue the exploration truly with open minds and open hearts, we’re sending a message not only locally but to the world that we’re not open for business, and that we’re not really serious when it comes to a project of this scale,” he said.

He also asserted the scope and impact of WeTown requires a very long-term lens, and that although it might not fit within the constraints of the city’s current master plan, cities are known to be ever-changing places that adapt and evolve.

“I look back at my family lineage… back to the first homestead that was put in Vancouver. And look at what Vancouver has become over the past 150 years. This is the densification that we all talk about,” said Banman, arguing that while the concept does not fit the current community plan, “an OCP is a dynamic, living document that forever changes.” 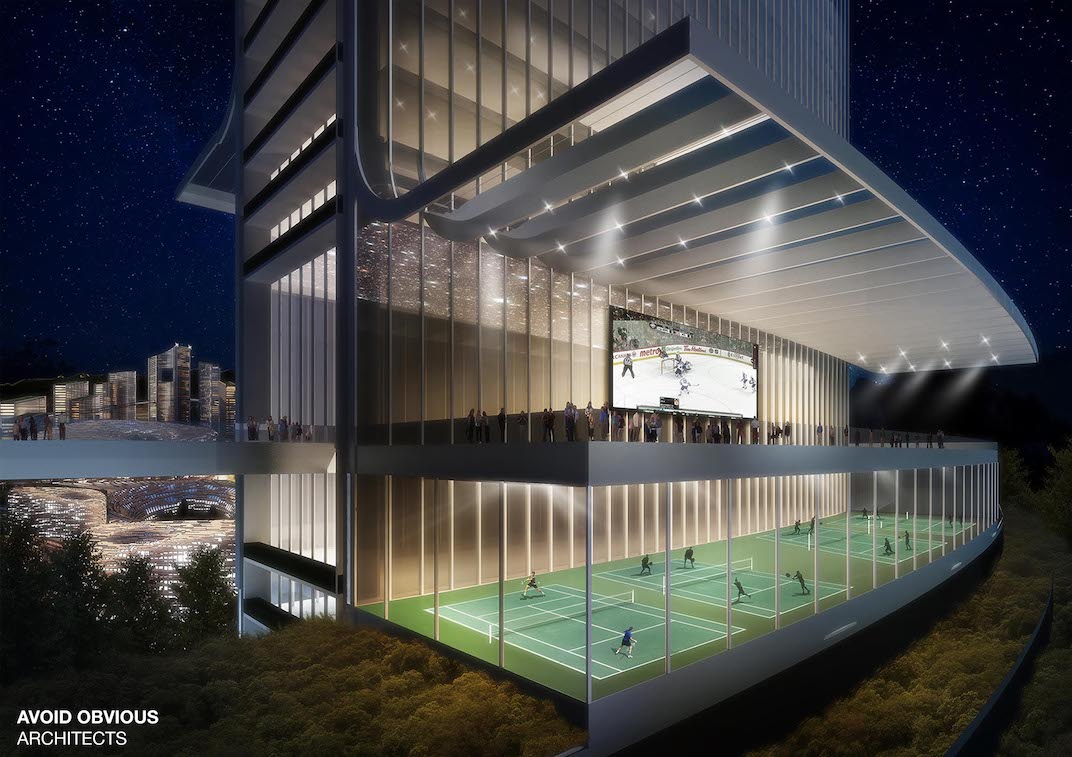