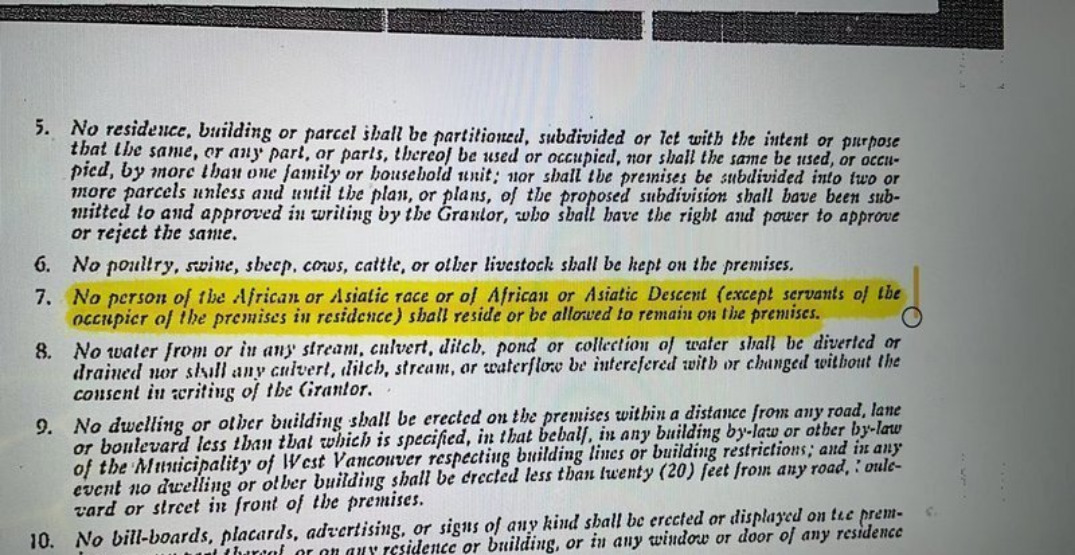 A City of West Vancouver resident who was recently asked by the City to submit a restrictive covenant for their property was left feeling “appalled and disgusted” by its racist content.

Her reaction was based on the language that’s included in the legal document that pertains to restrictive covenants.

This issue actually came to light in 2020 when a District of West Vancouver Councillor named Marcus Wong brought a motion forward to remove the racist language from the land covenant documentation. Aside from bringing the issue to light, the racist language remains intact two years later.

The resident in question didn’t want to be named but has started a petition in hopes of having action taken sooner. The resident is Chinese, born in North America with English as her mother tongue.

She told Daily Hive Urbanized that she needed the document in order to be approved for an improvements permit. The process to obtain the document was a long and arduous one, but she eventually found a way around it and got a friend who works in real estate to help procure it.

“She sent me the document which had these awful words about no Asians/no Africans allowed to reside on the property covenants.”

“We came below farm animals,” she added.

“A public announcement was made by Mayor Booth and Council, that the City of West Vancouver staff would begin the process of removing such discriminatory language on these restrictive covenants,” reads the petition.

The petition goes on to say, “Two years is a long time to rectify these wrongs, and West Vancouver’s Council’s public commitment to actively reject racism and discrimination is vital to build community and safety among all residents of West Vancouver.”

In a statement to Daily Hive Urbanized, a District of West Vancouver representative suggested that the process involved in making these changes is a long one.

“This is outside the jurisdiction of local governments. The resources required to pull, review for discriminatory language, and update land titles are significant. An actionable solution is yet to be identified.”

The representative also suggested that a report is under development and will come forward by July of this year.

“The old restrictive covenants are not legal and have no force. They are, however, deeply upsetting as a reminder of the country’s racist past, and West Vancouver believes they should be removed entirely.”

Daily Hive Urbanized has reached out to the BC Government for a statement on the matter.