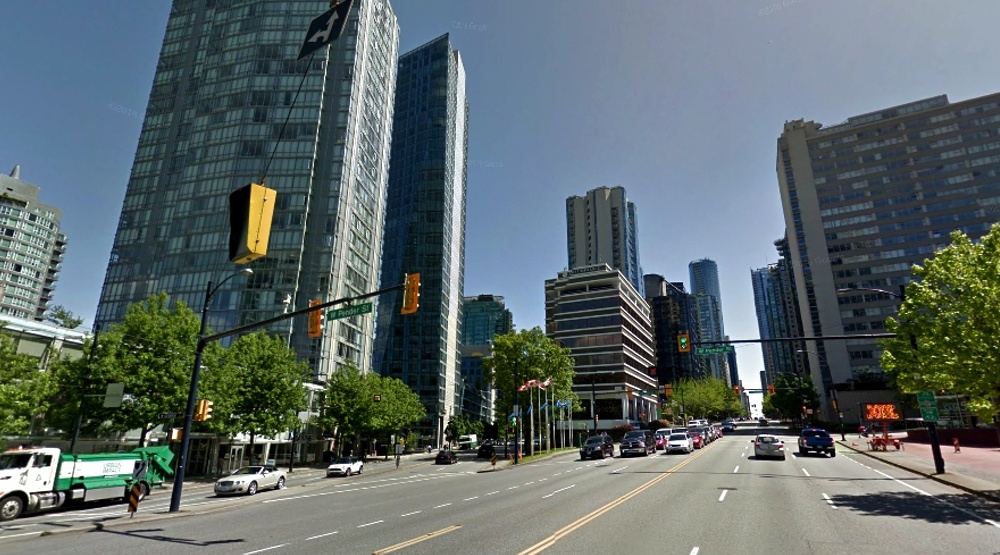 The intersection at West Pender and West Georgia streets is one of the busiest and most congested intersections in Vancouver. The westbound lanes of West Pender Street in this area experience high congestion levels from high transit bus traffic and the route’s usage by many North Shore drivers as an alternative east-west route through downtown Vancouver to the Lions Gate Bridge.

Last year, a report by the the Canadian Automobile Association ranked the intersection as the 10th most congested in Canada, right behind highways in Toronto and Montreal.

From five lanes to three lanes on West Pender Street

Changes to the intersection could be coming as part of a possible concept by the City of Vancouver that reduces West Pender Street between West Georgia and Nicola streets from a five-lane road to a three-lane road.

This will allow for the accommodation of the needed space to widen the sidewalk and build a dedicated, separated bike lane on the north side of the road over a one-block stretch instead of having cyclists share a lane with buses. 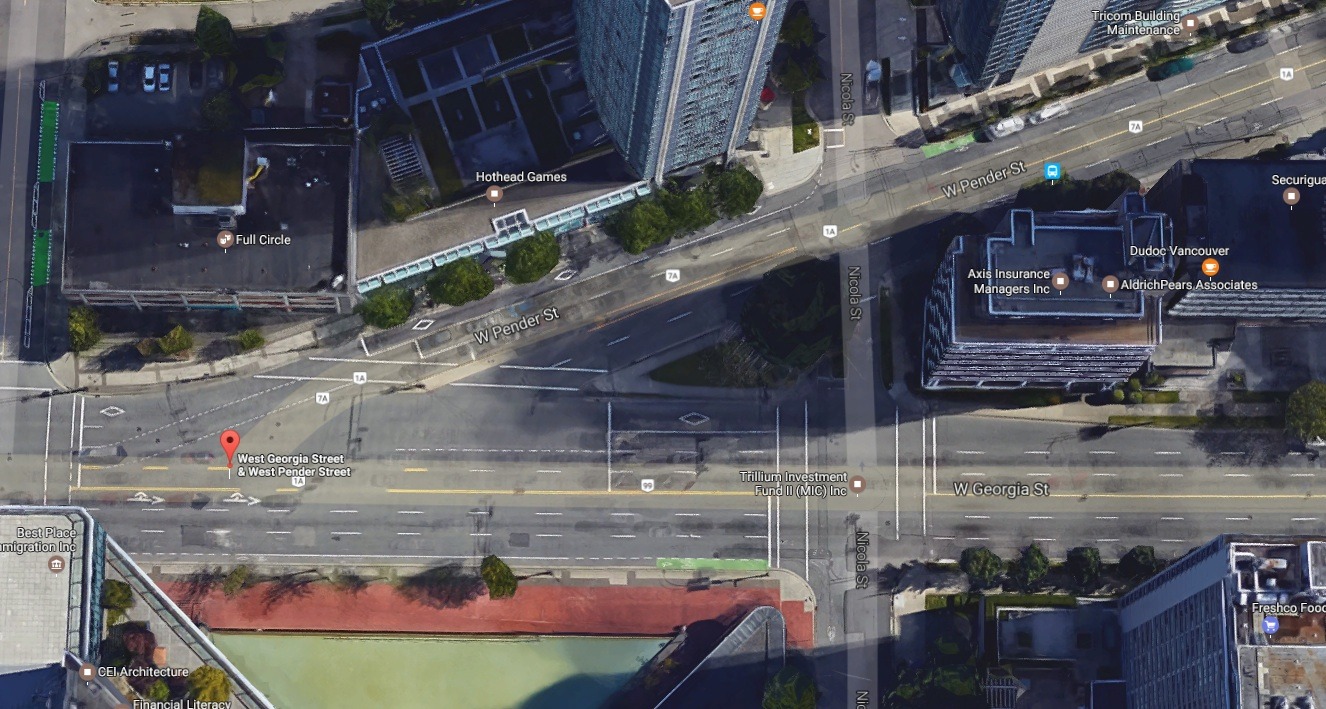 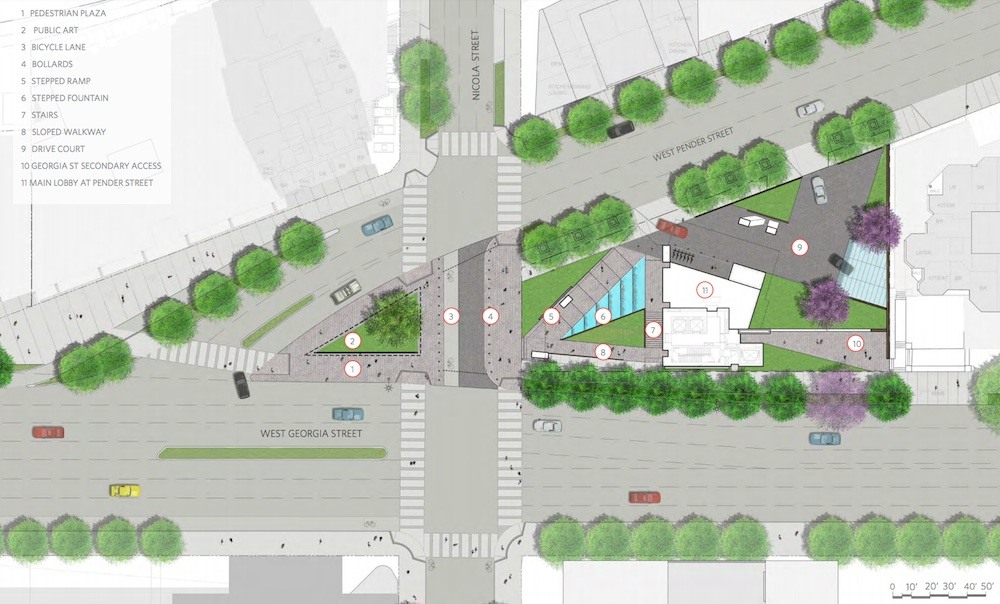 “Preliminary concepts, including a scheme shown in this rezoning application, are being explored which are consistent with our transportation policies,” the municipal government’s Engineering Department told Daily Hive in a statement, adding that the intersection design is “very complex”.

In 2002, Vancouver City Council approved the Downtown Transportation Plan that called for the eventual ‘normalization’ of the intersection at West Georgia and West Pender streets.

This would complement a number of bike lanes located nearby, including the bike lane along the Coal Harbour seawall 150 metres north.

Details of the potential one-block-long West Pender Street redesign were included in a recent rezoning application by Brilliant Circle Group to build a 46-storey residential tower at 1445-1455 West Georgia Street. While the project consists of urban realm plans that will improve Nicola Street and the flag plaza, the developer maintains the intersection redesign is a City-led project, not a plan proposed by the developer.

The municipal government says the expected development and resulting increased density will necessitate the start of a process to explore a possible reconfiguration of West Georgia Street.

“With the significant amount of redevelopment occurring along both West Georgia and Alberni in the West End, the City is launching a complete streets process around design concepts for West Georgia including the normalization of West Pender later this year,” the statement from the Engineering Department continues.

In 2015, a study by Simon Fraser University’s Urban Studies program found that the 11 transit bus routes that run along West Georgia Street are consistently delayed by right turning vehicles on the curb-side lane. Each bus that uses the street is delayed between two minutes and five minutes per city block.

As West Georgia Street accounts for 14% of all transit trips in the downtown Vancouver peninsula, with over 14 million trips annually with buses running as frequently as 22 buses per hour, some transit infrastructure additions were also suggested in the study. This included fare machines at bus stops, street-level bus platforms, the usage of articulated buses, and traffic signal priority systems for buses.

A long-envisioned streetcar network by the municipal government in downtown Vancouver and around False Creek will not be affected by any changes to West Georgia and West Pender streets. The City says the right-of-way for a potential future streetcar line to Stanley Park will run along Hastings Street. 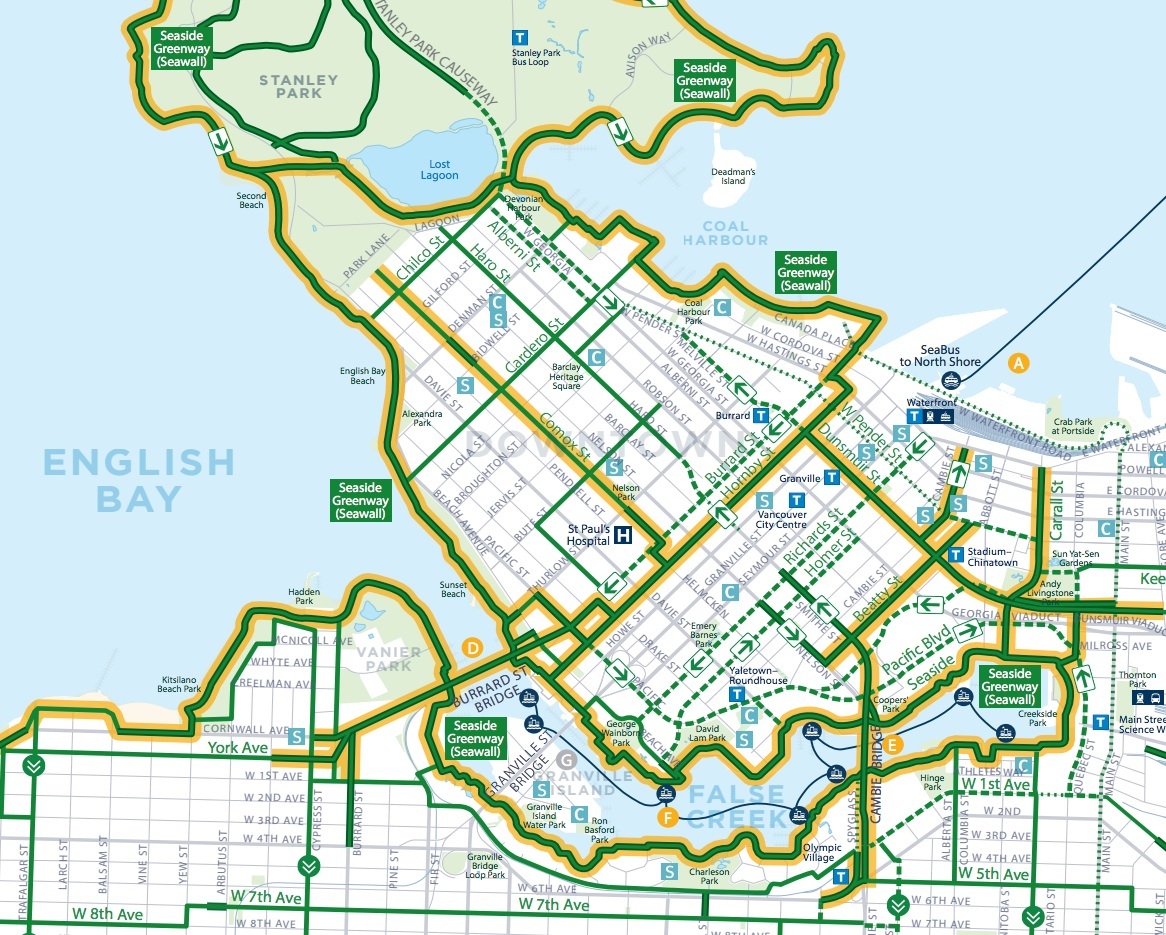 Image by: City of Vancouver