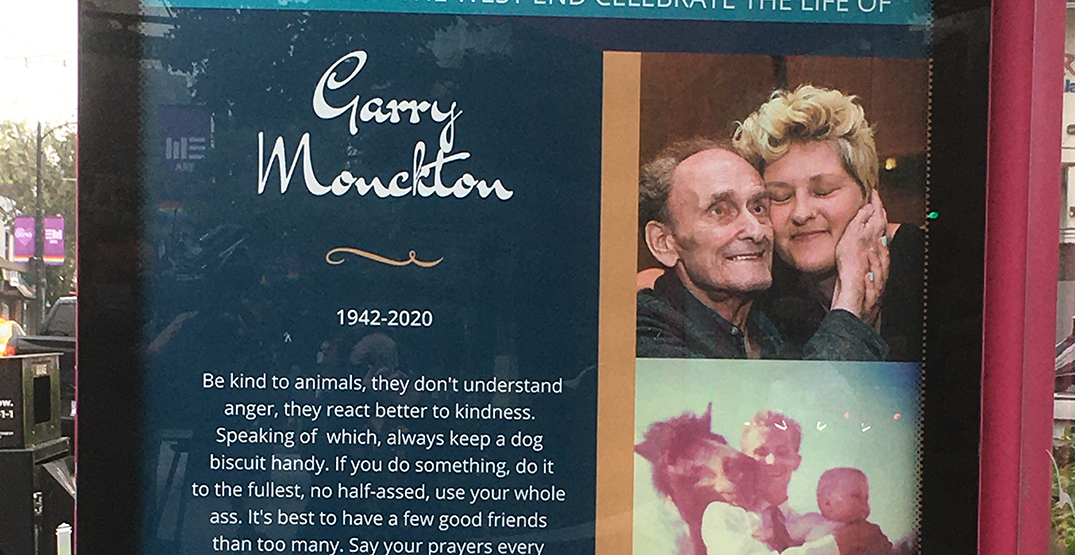 A new memorial poster in the West End honours local seniors who passed away after battling COVID-19.

The poster was paid for by MLA Spencer Chandra Herbert in a bid to recognize the seniors who have been hit particularly hard by the pandemic.

According to Herbert, residents of the West End make up one in 10 of BC’s coronavirus deaths.

“Each one of those British Columbians lost is not just a number. They are a person with a family left behind,” he said in a news release.

So far, 219 people in BC have died from coronavirus infections, according to the BC Centre for Disease Control.

The memorial poster is inside a bus shelter at Thurlow and Davie. It contains some words of wisdom from longtime West End resident Garry Monckton, a man in his late seventies who passed away recently after being infected with coronavirus.

“I think my dad would have been incredibly honoured to have this recognition, he was always pretty humble and just did whatever he could to make his community better,” said Sam Monckton, Garry’s daughter.

Here’s what Garry had to say:

Be kind to animals, they don’t understand anger, they react better to kindness. Speaking of which, always keep a dog biscuit handy.

If you do something, do it to the fullest, no half-assed, use your whole ass.

It’s best to have a few good friends than too many.

Say your prayers every day because you don’t know who’s listening.

Find a way to make peace with what you cannot change. That being said, fight for what you believe in, there are many things worth fighting for.

And finally… wait and see.