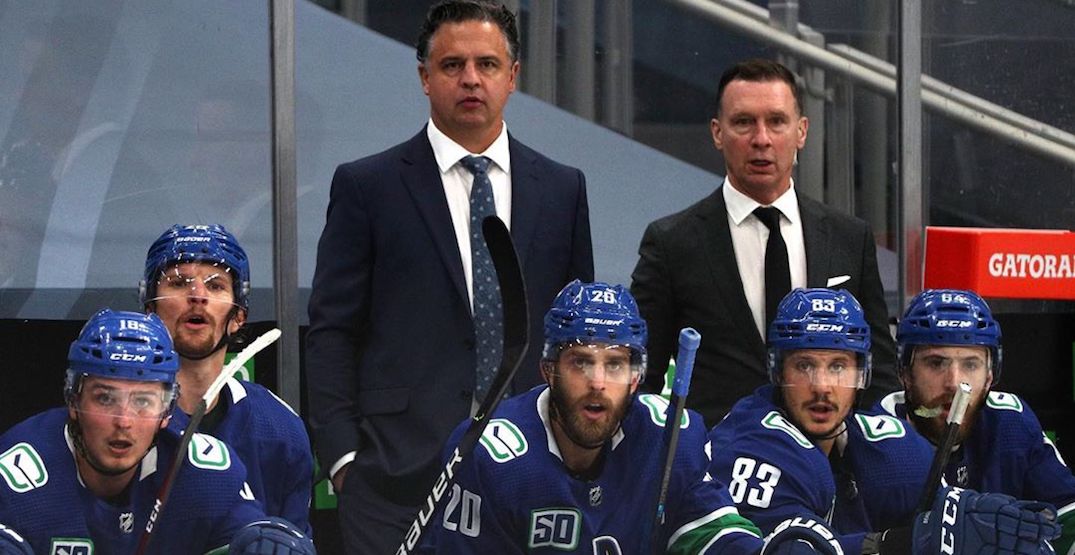 After surprise playoff run, there’s a lot of good vibes with the Vancouver Canucks heading into this offseason.

The team undoubtedly has a great core of young players, perhaps the most promising in franchise history given the age and talent level of Elias Pettersson and Quinn Hughes in particular.

But behind that great group of young players is a salary cap mess, which will hamper the team’s ability to improve or even maintain the status quo for next season.

The Canucks have over $14 million in projected cap space for next season according to CapFriendly.com, but that doesn’t include free agents like Jacob Markstrom, Tyler Toffoli, Chris Tanev, Jake Virtanen, Troy Stecher, Adam Gaudette, Tyler Motte, Zack MacEwen, and Oscar Fantenberg.

It’s going to be impossible to re-sign all of their best free agents without some serious salary management gymnastics, with Canucks GM Jim Benning confirming that he’s looking to shed salary last week in an interview with Sportsnet 650.

“I’ve already started talking to GMs on the weekend,” Benning told hosts Dan Riccio and Randip Janda. “I’ve had a couple calls this morning. I’m going to continue to touch base with all the GMs in the league and just try to figure out what the marketplace looks like, if we’re able to move money out, what it looks like. I’m going to be active in that market if we can be.”

But the task of moving money out won’t be easy, particularly with every team losing money during the pandemic and without the carrot of needing to win games to sell tickets.

While bad contracts will make this offseason difficult for Benning, there is always a way out of a bad deal, though the Canucks GM said he isn’t interested in giving away high draft picks as sweeteners in trades, like the Toronto Maple Leafs did last year to rid themselves of Patrick Marleau’s contract.

“I’m not going to be giving up first and second round picks to lose money,” Benning added. “We’ll have to figure out a different way.”

There’s no way out from Roberto Luongo’s cap recapture penalty, which counts more than $3 million against the Canucks for the next two seasons, or Ryan Spooner’s buyout, which counts over a million dollars in 2020-21.

But there are ways to move money.

Let’s start with an easy one.

It’s pretty clear that the Canucks are done with Sven Baertschi and the feeling is mutual. Dropped to the AHL out of training camp last season, Baertschi had a good year with the Utica Comets, but not good enough to land an NHL job with the Canucks or anyone else.

It would be a big surprise if anyone takes him at close to his full salary, so he’s the top candidate for the Canucks to buy out.

Whether it’s his ability to kill penalties, win faceoffs, or the value placed on his family name, Brandon Sutter likely still has value with some general managers around the league.

There’s a lot of miles on his 31-year-old body, and Sutter’s contract is certainly too rich given his production. That may mean Benning will have to retain salary, but if he can keep that to a minimum, trading Sutter makes sense.

Sutter is a fourth liner at this stage of his career, though he’s coming off a pretty good playoff run with six points in 17 games.

Perhaps there’s a young team looking to add a centre with leadership and penalty killing ability. If so, Sutter might be attractive for a low acquisition cost.

Loui Eriksson is tied for the highest cap hit on the Canucks and no longer seems capable of producing offence, but he has never been more tradeable than he is right now.

Eriksson has been paid most of his $36 million contract already and now has a modified no-trade clause, after holding no-movement and full no-trade clauses throughout the first four years of his deal.

He also doesn’t appear to see eye-to-eye with head coach Travis Green, so the 35-year-old might welcome a change of scenery.

Given the current economy, Eriksson might even be an attractive option to a team wishing to operate at the salary cap floor.

After his signing bonus is paid out, Eriksson will be owed just $5 million in real money over the span of the next two seasons but will carry a combined $12 million cap hit. So if teams like Ottawa, Buffalo or Detroit want to operate at the floor, Eriksson would represent $7 million of extra money in the team owner’s bank account.

4. Trade Roussel and retain salary if you have to

For the Canucks, a player like Roussel at his cap hit is no longer a luxury they can afford.

After an impressive first season in Vancouver, Antoine Roussel’s production slipped in 2019-20, scoring just 13 points (7-6-13) in 41 games. He brings energy and toughness to the team, but he’s also turning 31 in November.

There’s still enough to like about Roussel for other teams, though with two years left on his deal, Benning may have to retain some salary.

5. Move on from Virtanen

Contract: Restricted free agent due for a raise

After Benning said that the team may need to make some “tough decisions” on young players and expressed disappointment in Jake Virtanen’s playoff performance, it’s pretty easy to connect the dots on this one.

It may be time to move on from Shotgun Jake, despite the Abbotsford native hitting career highs across the board last season. Virtanen is due a big raise after the expiry of his two-year, $2.5 million contract.

He’s not a top-six forward on the Canucks, and he certainly isn’t a favourite of Green, who made him a healthy scratch to start the postseason. But given that he will have value because of his age, stat line and skill-set, Virtanen should net the Canucks a reasonable return. And that saves the Canucks money.

The Canucks are feeling the squeeze from the salary cap, so the time of paying a premium for depth players has to be a thing of the past. The task for Benning will be to find value, like he did with players like Motte, Leivo, and Fantenberg. Move out money, find bargains to replace them, and the Canucks could improve next season.