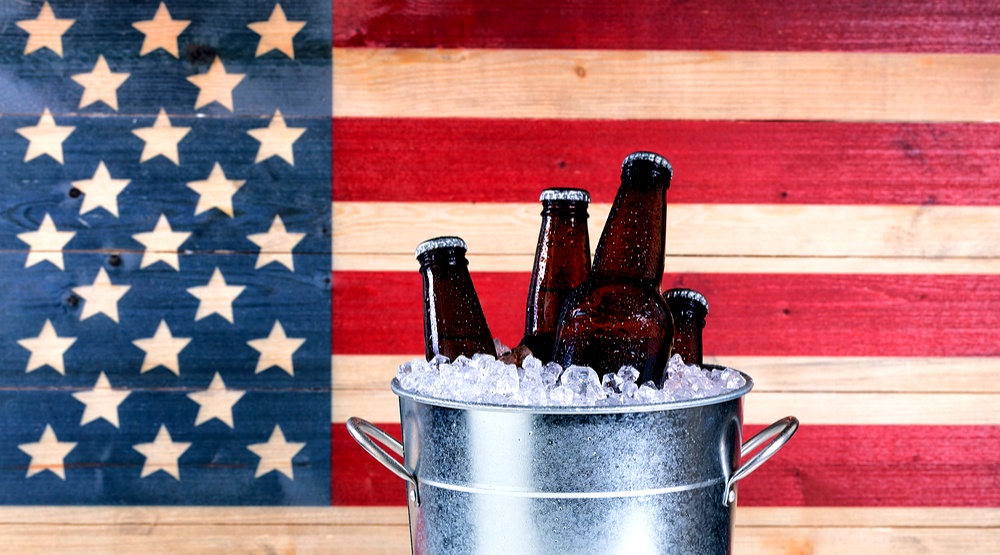 After many, many, many months of debates and debacles, Americans are finally ready to vote for their next president.

As their closest neighbour and ally, we Canadians are pretty invested in that decision. For the last year or so, we’ve been eagerly anticipating every twist and turn of the election season and chances are most of us are planning to watch as the votes come in on November 8.

Whether you’re cheering for Trump, Hillary, or just missing Jeb, here are ten places where you can watch the election results in Vancouver

Election results will start to drip in throughout the early evening, so if you want to catch all the action, head over to Colony on Main Street. It looks like they’ll have a live stream playing all day, so you can get all the commentary in the run up to the most anticipated election night of the decade. Your best bet is to grab a spot after work, order a $3 pint (or a $3 shot to calm the nerves) before happy hour ends at 6 pm, and bask in the glow of the many screens around the bar.

While the venue will likely be filled with mostly Hilary supporters, everyone’s invited to the Democrats Abroad Vancouver event at The Rogue. This group, which is made up of US Democrats living in Canada, has previously hosted election debate parties at Steamworks, Cedar Cottage Pub and other venues around town, all of which have been hugely successful. The group is rooting for Clinton (obviously), but is also cheering for spirited debate between supporters of both candidates. Show up early — this one is going to be busy!

The UBC Graduate Student Society (GSS) is teaming up with Koerner’s Pub to screen election coverage from 5:30 pm onwards, but the event isn’t just for UBC students. At 6 pm, the GSS is also hosting a guided tasting of Twa Dogs new lineup of draughts, so you can sip on something new while getting ready to embrace the new world order, for better or for worse.

Looking to rub elbows with the upper crust on election night? The American Chamber of Commerce in Canada, Pacific Chapter (AMCHAM) is hosting a Race for the White House Party at the Fairmont, and high-profile guests like US Consul General Lynne Platt have already got their tickets. Attendees will be treated to commentary from AmCham’s Race for the White panelists, American fare food stations and a Dixieland Jazz band.

While the pub doesn’t have an official event listed, this place has been filled to the brim on each of the debate nights this election season. So, the odds are good that they’ll be streaming the results, too. The brew pub has room for hundreds of guests, but it’s still likely to fill up fast. Show up early, order a straight-up cocktail ($2 off on Tuesdays) and politely ask your waiter to put on the election coverage ASAP.

Wish your candidate had some luck of the Irish right about now? Doolin’s plans to have a large-screen TV with full election coverage starting at 5:30 pm. Hosted by Equal Voice BC, the event in their VIP Room encourages attendees to strike up debate with Equal Voice members and other guests in the bar — as long as it stays civil (no calling anyone a “nasty woman”). Instead, offer them a bingo sheet or a Ruth Bader Ginsberg colouring sheet, which will be provided by the venue.

Want to watch the results come in on the biggest screen in Gastown? Of course you do. And you can, as long as you make it to The Blarney Stone by 5:30 pm to grab a seat. In true patriotic fashion, the bar is offering specials on Jack Daniels and American Draft. And if you get bored watching Clinton and Trump duke it out, you can entertain yourself with some Presidential Trivia and US State Pick-Em Ballot Games.

Vancouver techies are always hopping from one networking event to the next, but on election night, you don’t have to choose between work and play. CodeCode is hosting a workshop titled The Case for Research at Start-Ups, followed shortly by a live feed of the election results. The team will have local American expats and polling experts on hand, ready to answer any questions about the evening. Plus, you can help yourself to beer, wine, and pizza once the live stream starts.

The Rio Theatre is inviting Vancouverites to join them and the gang over at CNN to see history (or herstory?) being made. This one starts a little later than the rest, but you’ll be just in time to see the final results roll in. The theatre is also licensed, which means you can drown your sorrows if your candidate loses or toast to the future if they emerge victorious. 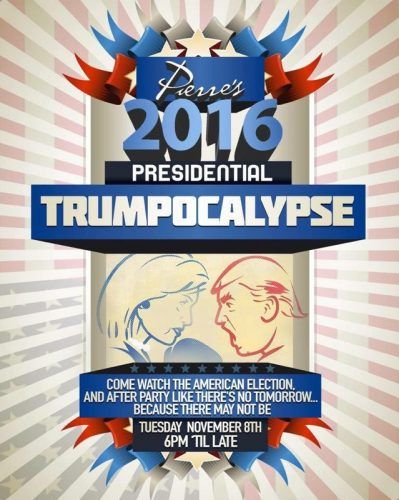 If you enter this Yaletown haunt on Tuesday night to catch the election results, you’ll be in for a treat. The lounge is calling its US election after party the Trumpocalypse – so you can imagine what sort of vibe they are going for here. This evening will include drink specials and it’s going to go late into the night, so head here if you want to party like it’s the end of the world.

Leah Bjornson is a writer and editor living on the West Coast. If she’s not typing away on her laptop, you’ll find her reading the latest dystopian or coming up with strategies for her Survivor fantasy pool.