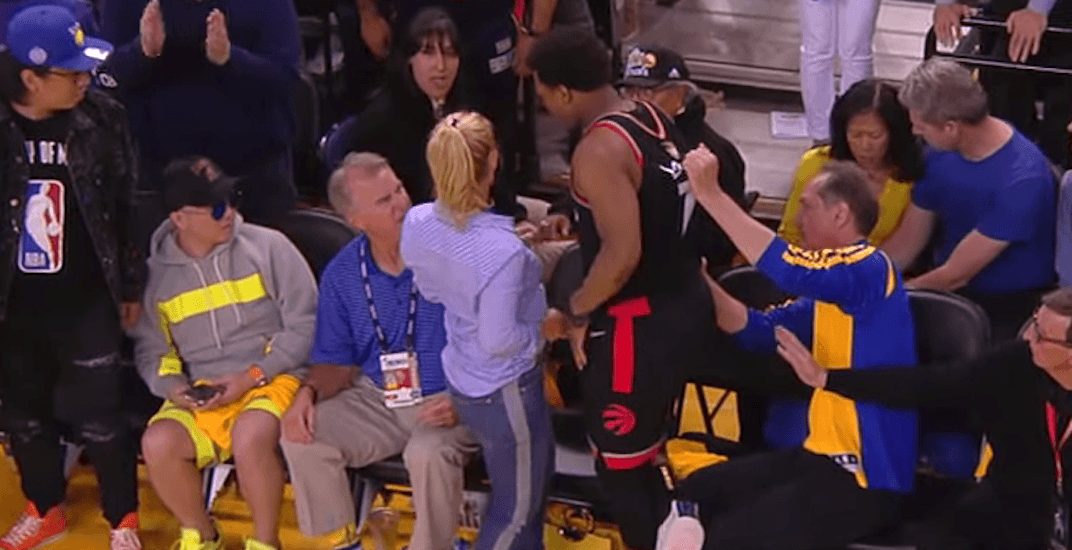 Golden State Warriors minority owner Mark Stevens has already been banned from attending NBA basketball games for one year and fined half a million dollars, and now he may lose his stake in the team.

Stevens will “likely” be forced to sell his shares before the start of next season, according to a report from NBC’s Dylan Byers.

🏀 Multiple sources close to the Golden State Warriors tell me Mark Stevens, the minority owner who pushed Kyle Lowry, will likely be forced to sell his shares before the start of next season … #NBAFinals #KyleLowry

Stevens shoved and directed obscene language at Kyle Lowry after the Toronto Raptors guard dove into the front row of courtside seats at Oracle Arena in an attempt to save the ball from going out of bounds.

“Honestly, I hope he’s never allowed to come to an NBA game, because he shouldn’t have did that,” Lowry told ESPN after the game.

The Warriors organization – from management, to head coach Steve Kerr, to the players – have fully condemned Stevens’ actions.

“Mr. Stevens’ behaviour last night did not reflect the high standards that we hope to exemplify as an organization,” the Warriors announced in a team-released statement.

LeBron James even weighed in on the subject, saying “there’s absolutely no place in our BEAUTIFUL game for that AT ALL,” in a lengthy impassioned social media rant.

Stevens himself apologized and took ownership of his actions in a statement released on Thursday.

“I take full responsibility for my actions last night (Game 3) at the NBA Finals and am embarrassed by what transpired. What I did was wrong and there is no excuse for it,” he said.

“Mr. Lowry deserves better, and I have reached out today (Thursday) in an attempt to directly apologize to him and other members of the Raptors and Warriors organizations. I’m grateful to those who accepted my calls.

“I hope that Mr. Lowry and others impacted by this lapse in judgement understand that the behaviour I demonstrated last night does not reflect the person I am or have been throughout my life. I made a mistake and I’m truly sorry. I need to be better and look forward to making it right.

“I fully accept the punishment administered by the NBA and the Warriors.”

A Silicon venture capitalist reportedly worth $2.3 billion, Stevens has been a minority owner of the Warriors since 2013. While selling his share of the team may not be something Stevens wishes to do, he stands to make a $180 million in profit, according to Forbes.

The Warriors were not a powerhouse team when Stevens purchased a share of the franchise, and were valued at $750 million by Forbes at the time. Golden State has been to five NBA Finals and won three championships since. And with a brand new arena set to open in San Francisco next season, the team is now worth $3.5 billion.