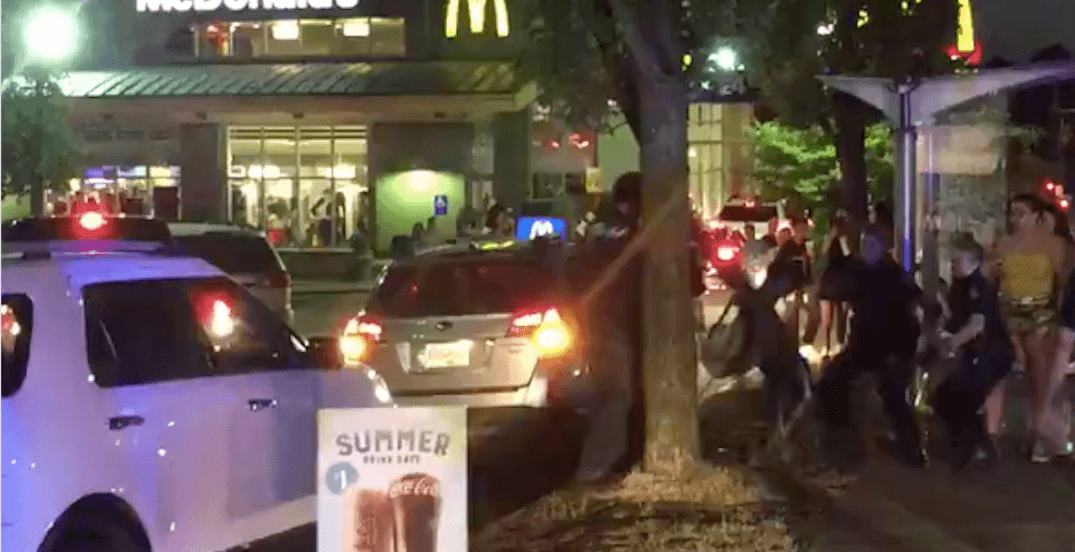 An incident in East Vancouver on Sunday night that police said began as a “verbal dispute” ended with one man in custody after a dramatic arrest, and another in hospital with stab wounds.

According to the VPD, officers responded to reports of  stabbing near a bus stop outside of a McDonald’s restaurant at East Hastings Street and Cassiar Street, just after 10 pm.

Upon their arrival, officers found the suspect near the bus stop and “attempted to arrest him at gun point.” The suspect was reportedly uncooperative, and police used a Taser to subdue him, pull him to the ground, and arrest him.

A knife was recovered at the scene and the suspect was treated in hospital for a cut to his hand, which he had received prior to the officer’s arrival.

The victim – a 22-year-old Langley man – was transported to hospital with non-life threatening stab wounds.

A video of the incident was originally shared by a witness on social media, before their account was made private.

Warning: This video contains material that some people may find graphic

just saw racist Vancouver cops point a gun at a kid’s stomach, taser him, and then tackle him to the ground outside of the McDonalds at cassiar and hastings. @VancouverPD what the fuck. pic.twitter.com/RFu4gHjj8v

WARNING: Disturbing video. Spoke to witness @anguishreid who is calling this altercation racist. Police tase a young man outside McDonalds on Hastings at Cassiar / Hwy1 around 10:15 pm. He wonders if police wouldn have reacted differently if he was white. @NEWS1130 1/ pic.twitter.com/cXqSMITcz6

Police said the suspect and the victim did not know each other prior to the incident, and were amongst a crowd of people who had recently left the Breakout Music Festival, at the nearby PNE Fairgrounds.

Robillard confirmed that Wan has been charged with one count of assault with a weapon.