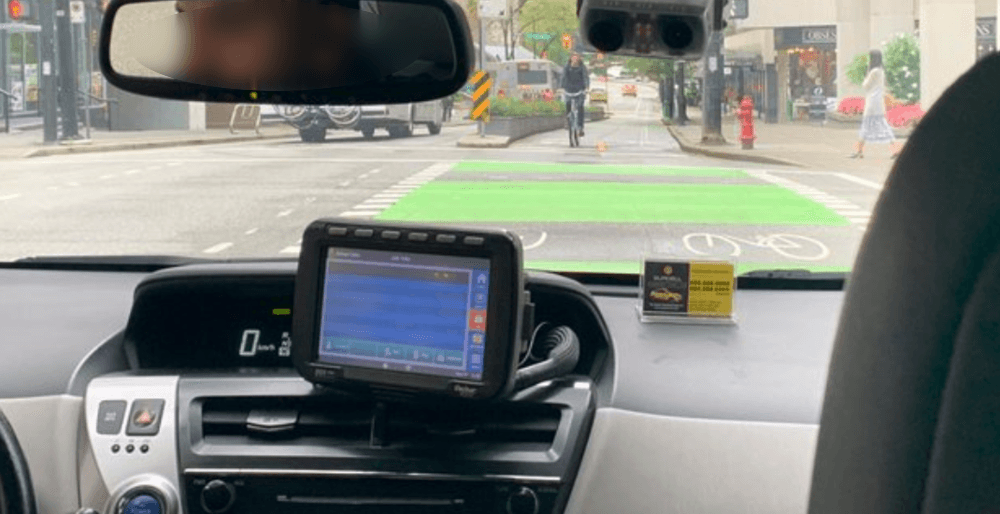 A video showing a cab driving in a separated bike lane in downtown Vancouver is being investigated by police.

The footage was posted online on September 9 by Nolan Lienhart who, according to his Twitter bio, is an urban planner from Portland, Oregon.

Got an unexpected tour of the Dunsmuir #Cycletrack from my taxi driver on the way to #Railvolution #Vancouver pic.twitter.com/CfM9HqcCGl

“Got an unexpected tour of the Dunsmuir #Cycletrack from my taxi driver on the way to #Railvolution #Vancouver, ” wrote Lienhart.

The footage shows the cab driving through the bike lane and merging back onto the roadway after a few seconds.

Lienhart sent out several more Tweets about the incident stating he “got out of the car wishing Vancouver had #uber and #lyft,” because both companies would have allowed him to conveniently make a complaint in the app, “and repeated violations could result in a driver being removed from the service.”

“I made complaints to cab companies in other cities and it always felt like throwing my time into the wind,” he said.

Lienhart claims one cyclist left the bike lane to ride in counterflow traffic, in order to avoid the cab.

We encountered one who left the lane (in counter flow traffic!) to avoid us

Cst. Steve Addison with VPD confirmed with Daily Hive that investigators with its traffic section are looking into the incident and will be speaking with the driver once he has been identified.

Hello Nolan. The Vancouver Police Department would like to investigate this. Please call our Traffic Section Taxi Detail at 604-717-2746 or direct message me with your contact number. Thanks! S/Sgt. 1557 Duncan

“The driver could receive a ticket and fine under the Motor Vehicle Act,” said Addison.

Daily Hive has reached out to Lienhart for further comment.