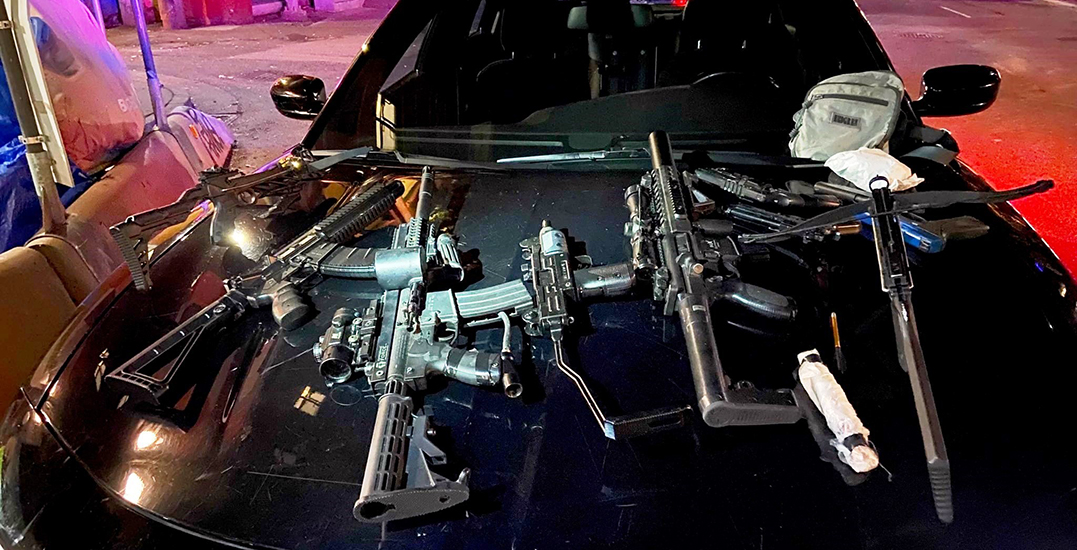 Crossbows, replica rifles, and other weapons were collected by VPD after a 22-year-old was shot with an arrow (VPD).

A disturbing attack that saw a homeless man get shot with an arrow is being investigated by police.

The Vancouver Police Department (VPD) says that the incident occurred on Thursday night. The victim, a 22-year-old resident of the Downtown Eastside, was standing in front of the Women’s Centre at Columbia Street and East Cordova.

“He felt a sharp pain in his leg and realized he’d been shot,” VPD said in a statement. “With an arrow lodged just below his kneecap, the victim walked a block to Insite, where staff gave first aid and called 9-1-1.”

At this point in time, it’s believed that the arrow was shot from the fire escape of a building on East Hastings Street.

The building was later investigated by police officers, and crossbows, replica assault rifles, scopes, lights, and lasers were seized.

Crossbows, replica rifles, and other weapons were collected by VPD after a 22-year-old was shot with an arrow (VPD).

“This level of callousness and disregard is shocking,” said Sergeant Steve Addison. “All signs point to this being a random attack, and we’re incredibly concerned because the victim was already one of our community’s most vulnerable.”

He adds that the suspect who shot the arrow is believed to be either a resident or visitor of the building, who fled before police arrived. The attack also comes less than one month after a violent and unprovoked attack on a homeless man in Yaletown.

“We know that homeless and unsheltered people are already more likely to be victims of crime than those who are housed,” Addison added. “We are doing everything possible to identify the people who did this and hold them accountable.”