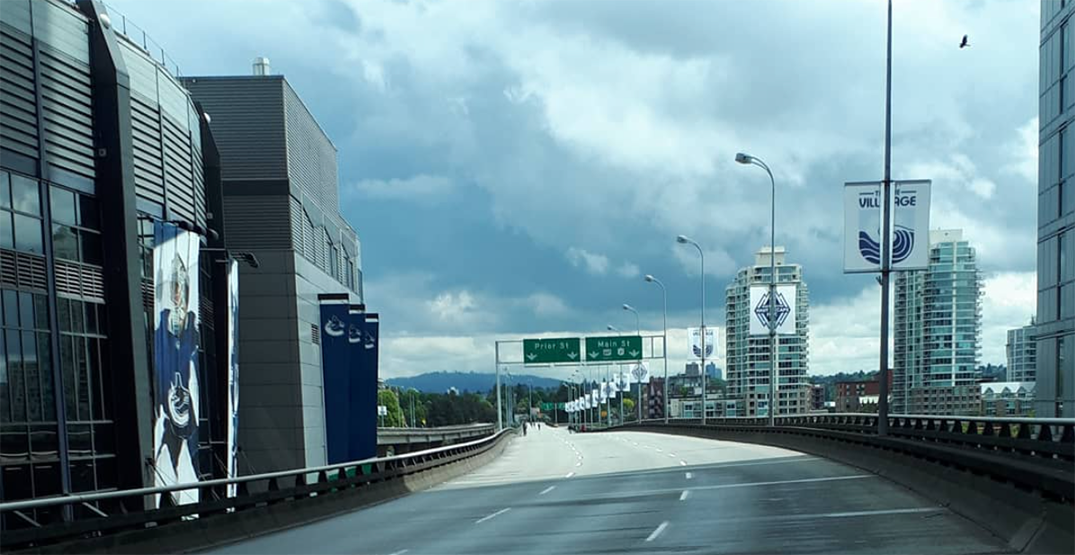 The demonstration began Saturday, and is supported by Vancouver’s Black Lives Matter chapter. Organizers say the location was chosen to honour Hogan’s Alley, a Black community in Vancouver’s Strathcona neighbourhood that was razed when the city constructed the viaducts.

BLACK LIVES MATTER • Today’s Blockade is for our community. For the Black community that was removed from this place, and the Black community that is still alive and strong in the this city. • Do you know the story behind Hogan’s Alley? The expropriation of the community that thrived here, and the City of Vancouver’s intent to disperse and displace the Black people that called this place home? Today, we work in solidarity with the protesters at the viaduct. They are reclaiming this space that was taken from us. We also affirm the protesters at the Crab Park camp, and the vigil downtown for Chantel Moore. • We need the City to step up. To commit to change. For all of us. • Black Lives Matter Vancouver

Black Lives Matter Vancouver hopes the demonstration pressures the city into accepting several of its requests:

Police advised drivers to avoid the viaducts for the second day in a row, saying the bridges were blocked to traffic in both directions.

#VanTraffic: Traffic is still closed in both directions on the Georgia Viaduct because of a protest. Drivers are advised to avoid the area. pic.twitter.com/EMZhlkc9cZ

Hogan’s Alley Society posted to Instagram Sunday afternoon thanking protesters who showed up, and suggested the blockade would continue overnight.

Thank you to everyone who is currently protesting to reclaim the Dunsmuir & Georgia Viaduct to honour the Black life and community that once thrived in these exact streets. Hogan’s Alley was demolished when the city of Vancouver built the Georgia Viaducts right through the neighbourhood home to the first Black immigrants in the city. The vibrancy of our communities, culture, entertainment, churches and businesses were destroyed. It would be appreciated if you could bring food and drinks for the protestors staying over night. Please remember to wear a mask and be safe as the city is reminded that BLACK LIVES MATTER.✊🏾