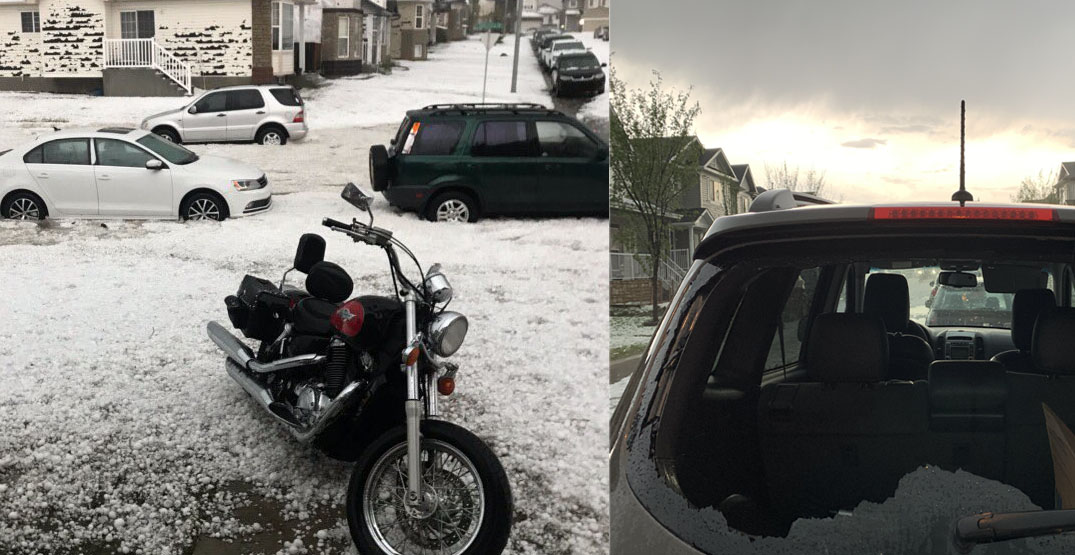 The calendar says June, but the weather in Alberta doesn’t seem to be listening.

A severe storm brought flooding, hail, and even funnel clouds to parts of the province Saturday on Saturday.

Neighbourhoods in the Calgary area were blanketed in hailstones, with several locals reporting their home and car windows were broken.

Little video of the golf-to-pingpong-to-tennis ball sized hail in my neck of the woods. I have no windshield left, nor siding on my western wall.@TD_Insurance @TiffanyGlobal #yycstorm pic.twitter.com/CLke9g9uSY

Heres what happened to my friends house who lives a few mins away from me #abstorm pic.twitter.com/t0f89ri0C6

Never seen such a storm in my life. #abstorm pic.twitter.com/65ZiGzI8CW

City councillor George Chahal tweeted that his ward had been “devastated” by the falling hail.

Ward 5 has been devastated by hail and rain tonight. There has been catastrophic damage inflicted on houses and vehicles, and major flooding on many streets.

Last night a storm, with hailstones approximately the size of golf balls, battered Calgary causing extensive damage to cars, homes, windows, and roofs. Our thoughts & prayers are with all those affected by this. Please stay safe. For any help please contact our office. pic.twitter.com/XeBK9Kz0R0

Several others shared photos of the waterlogged roads around Calgary.

Omg, look at this flooding in #YYC from today’s storm! Just drove by this on Deerfoot.

A tornado warning was also issued for parts of southern Alberta Saturday evening, and witnesses captured images of the formidable clouds.

Environment Canada’s Calgary forecast is calling for showers on Sunday before the sun returns on Monday.