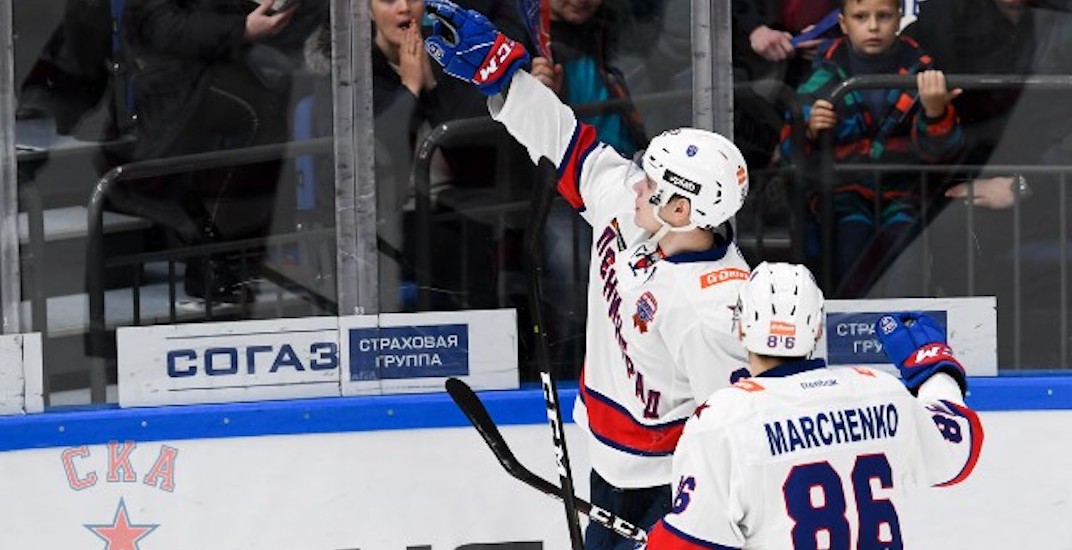 Get excited, people. Vasily Podkolzin has found his stride in the KHL and the points are beginning to flow.

There were more than a few concerned Canucks fans wondering if the organization’s prized prospect was wasting away vital developmental years on the bench with SKA St Petersburg of the KHL.

The fears were justified.

The 6-foot-1, 190-pound right-winger was seeing extremely limited deployment and with it, zero production. As a KHL rookie playing on a high-end squad, the 2019 10th overall selection was marred in a pointless skid that lasted 17 games to begin the year.

The power forward was seeing anywhere from no shifts, to 3-4 minutes on a traditional fourth line. It wasn’t working. It wasn’t great for his development.

But something has changed coming out of the World Junior Championships.

Podkolzin has been united with fellow U20 skaters and WJC linemates, Kirill Marchenko (CBJ) and Ivan Morozov (VGK). The trio has completely changed the complexion of SKA’s bottom six. They bring a fast-paced, offensively creative approach while maintaining a (mostly) responsible defensive game.

He has 2 points in 2 playoff games and 10 points in his last 15 games. #Canucks pic.twitter.com/jLLVyCHaqU

Since returning to Russia on January 12, Podkolzin has seen his minutes ramp up to an average of just over 12 minutes a game. The overall deployment levels are not earth-shattering but have sparked a significant improvement in production. Dating back six weeks, the dam has burst and points have been flowing out.

Podkolzin has 11 points in his last 17 games, including a goal and two primary assists in four opening-round playoff games last week — including his second 3+ game point streak of the 2020 calendar year.

Vasily Podkolzin with the rush, Kirill Marchenko with the finish.

Podkolzin now has 3 primary points in 3 playoff games and 11 points in his last 16.

This past weekend, SKA swept Vityaz 4-0 to move onto the second round of the KHL playoffs. It was in the fourth game that Podkolzin played arguably the best hockey of his career. During the triple-overtime match, the 18-year-old was all over the ice, creating chances down low with his strength:

Podkolzin goes hard to the net for a chance in 3OT, then flashes the staredown after.

Just a reminder that he doesn't turn 19 for another 3.5 months pic.twitter.com/C0DL83d1tp

As well as off of the rush — coming oh-so to ending things late in the fourth frame:

A good rush by Vasily Podkzolin in OT. It's his 6th shot of the game pic.twitter.com/adWMcsVrJM

The rookie pro ended the evening with six shots in 24:31 of ice time — both KHL career-highs.

Podkolzin’s offensive evolution should not come as a surprise but remains a terrific sign of things to come. Recording two goals and eight points in 30 regular season games may not sound like much. But that was far and away the most by a U19 skater in Russia’s top tier.

The production coming more consistently later in the year shows that arc is trending in the proper direction too.

We just don’t see many teenagers – especially 18 year olds, in the KHL. If they are there, they’re usually seeing incredibly limited minutes. Unless of course, they’re on a bad team. And therein lies the disparity between the haves and have-nots when looking at teenagers in the league from a historic lens.

Here’s a look at the top 18-year-old seasons in KHL history. 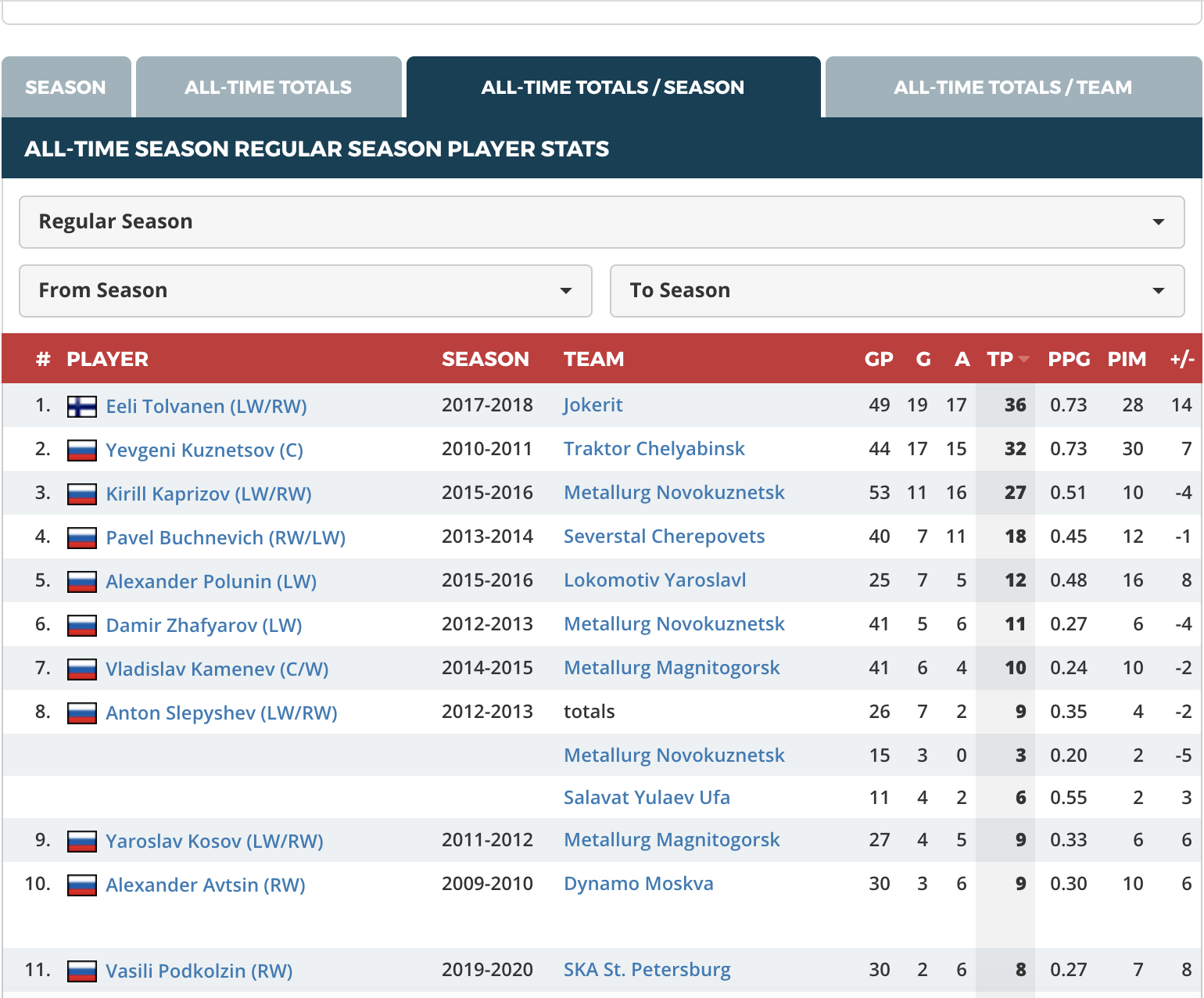 Quite clearly, Podkolzin is miles behind the tremendous seasons spun by the likes of Eeli Tolvanen and Evgeni Kuznetsov. However, those players were featured in the top six and on the power play throughout their seasons. Especially, Kuznetsov who led a dreadful Traktor squad in goals and points. Tolvanen and former Canucks’ first-rounder Niklas Jensen were everything for that young 2010-11, Jokerit team. They literally let Tolvanen bomb away for 90 seconds on every man-advantage opportunity.

If we include older draft-plus one players like Vitali Kravtsov (21 in 50GP), Artemi Panarin (21 in 40GP), and Vladamir Tarasenko (19 in 42GP), they too fall in line with solid deployment while playing for poor teams. Only Panarin saw under 14 minutes per game.

Now, I didn’t sit down and crunch the numbers for all of these historical comparisons, but Podkolzin’s impact on a per-minute basis has been high-end for the better part of two months.

Podkolzin has been recording 3.48 points per 60 minutes since he broke through with his first point of the season back on January 21. For reference, Patrick Kane and Auston Matthews have been converting at 3.4 points-per-60 this season. Elias Pettersson is hanging around 3.1.

To add a further element to this evaluation, the 18-year-old is already a staunch defensive presence. He is rarely on the wrong side of a play and can force his will physically despite being one of the youngest players in the league.

Many people were concerned with selecting a player so early in the draft knowing full well that the Canucks would have no say in how he would be handled for the next two crucial developmental seasons. However, earning his ice time in the second-best league in the world, finding offensive success, and gaining valuable playoff experience will pay dividends to his long-term success.

The wait time may be forced on the Canucks and their fans, but it may turn out to be the best thing for Podkolzin in the end.