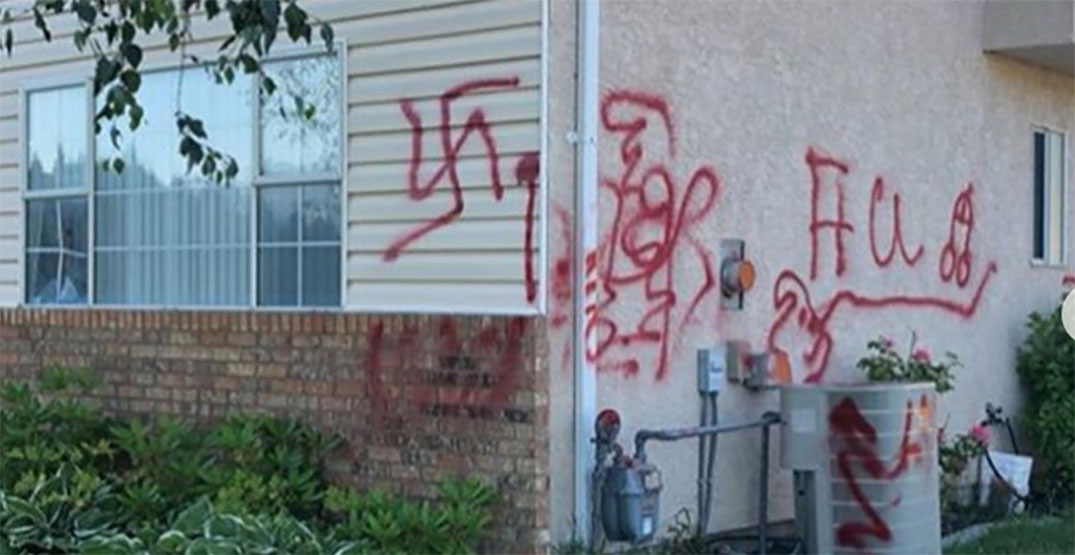 Courtesy of the Lekhi family

Police in BC’s Interior are investigating two incidents of racist graffiti as hate crimes after a  home and a local park were targeted by vandals early Monday night.

The Lekhi family’s home had its windows smashed and a swastika and other offensive images spray-painted on overnight. The two parents were in the living room when they heard two loud bangs, their son, who lives in Vancouver and did not want to give his first name, told Daily Hive.

When the parents went to the bedroom, they saw smashed glass on the floor and called police.

The son said his family is South Asian, and he believes the vandalism was racially targeted.

“We know what that symbol means. It’s the aryan race. It’s whites only,” he said. “Racism is here in Canada. It’s not a US problem.”

Please share. We have lived in Summerland for over 30 years and although we have experienced discrimination and racism, we have never experienced a hate crime like this. We are shocked and ask the community to come together and share this post. Racism isn’t new here, it is just being brought to the surface.

The son drove up to the Okanagan from Vancouver with his brother and sister to support their parents, who were shaken by the incident.

“I’ve been bullied for my skin colour in middle and high school, but we have never been targeted like this,” he said.

Sgt. David Preston with the Summerland RCMP said officers are investigating what happened. It appears the Lekhi’s windows were broken with a rock, and that the vandals later headed to a nearby park, where they spray-painted more offensive messages.

“This kind of hate motivated vandalism is not often seen in the close knit community of Summerland. We understand this kind of vandalism can be disturbing to many, and the Summerland RCMP is taking this very seriously,” he said. “At this time, there’s nothing to indicate a concern for public safety.”

Anyone with information about what happened is asked to contact investigators at 250-494-7416 or leave an anonymous tip through Crime Stoppers.